Definition of a Sin Tax:

A sin tax is a common name for an excise tax levied on vices such as tobacco, alcohol, and gambling.

Excess tobacco use, alcohol consumption, and gambling can be addictive and harmful. Sin taxes are popular among politicians because the tax is intended to discourage the use of these damaging products while generating large revenues for the government. The demands for the taxed “sins” are relatively inelastic, so consumers pay the bulk of the tax.

The graph below clearly shows consumers bearing the bulk of an excise tax for cigarettes. (The figures are estimates and for illustration purposes only.) Assume the government places a $1.00 excise tax on a pack of cigarettes. Prior to the tax, a smoker paid $1.35 per pack. 1.45 million packs were purchased per day. The price jumped from $.90 to $2.25 after the $1.00 excise tax was imposed. The quantity demanded only dropped by .2 million packs. This illustrates that the burden of the tax is shouldered by the consumer, and unfortunately it does little to discourage smoking. 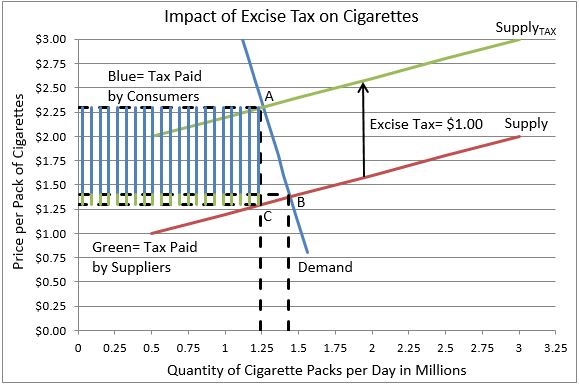 Recently there has been a movement to tax sugar drinks in several states in the US as a way to reduce obesity. Supporters believe the tax would encourage people to substitute healthier drinks for soft drinks and sugary fruit drinks. Opponents argue that the tax would place a burden on the poor. This counterargument is true if the consumer’s elasticity of demand for sugared drinks is more inelastic than the producer’s elasticity of supply.