Definition of Standard of Living:

Standard of living measures the wealth, comfort, and other variables that affect one’s quality of life.

Economists measure the quality of life in a country by its standard of living. Our standard of living is affected by economic measures such as income, gross domestic product, employment opportunities, and affordable housing. Also included in the standard of living are environmental cleanliness, quality and availability of health care, life expectancy, distribution of income, and many other variables.

What is the best measure of an area’s standard of living? Some may argue that GDP is because there is a direct correlation between wealth and the ability of a country to provide for its citizens. This is especially true if GDP is measured on a per capita basis. 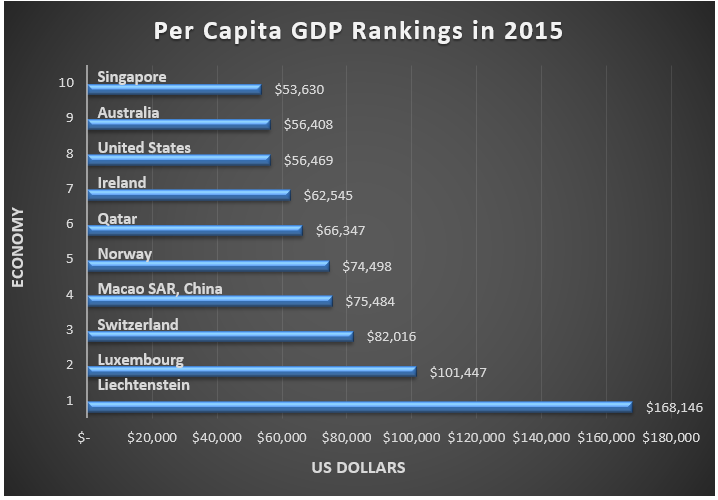 As we already know, the standard of living considers other variables that determine the quality of life. Per capita GDP is a useful tool in determining a country’s means to improve the lives of its citizens, but that does not prove its citizens have a high standard of living. Generally, a person’s standard of living will correlate positively with their income level, which can lead some people to erroneously associate wealth with happiness. This common belief about the relationship between income and personal satisfaction may skew how the average person interprets GDP and per capita GDP.

The Distribution of Wealth Matters
Per capita GDP reveals the average income of a population and is sometimes viewed as a country’s standard of living, but some nations have a high concentration of wealth. In other words, there are a few very wealthy individuals and a much greater population of poverty-stricken families. An economy with concentrated wealth may have a per capita GDP equal to an economy with more evenly distributed wealth. In spite of this, the standard of living and economic health of the economy with a higher concentration of wealth would be lower than the country with the more evenly distributed wealth. Income distribution contributes to the overall standard of living because more of the citizens share in their economy’s prosperity.
The Human Development Index – A Better Way to Measure Standard of Living


Economists recognize that quality of life depends on more than average income. This problem has generated other indexes to calculate the standard of living. Each index recognizes that income is just one of the variables that affect the standard of living. The Human Development Index (HDI), published by the United Nations, is an index that measures the standard of living in different countries by combining life expectancy, educational attainment, and income. Table 1 ranks the top ten countries using the HDI from 2015. Only the United States, Germany, and Canada rank among the largest economies while ranking in the top 10 HDI. However, only four countries listed in the top ten of per capita income failed to make the top ten ranking in HDI (Qatar, Macao SAR, China, Luxembourg, and Liechtenstein). This shows the positive correlation between per capita income and quality of life. 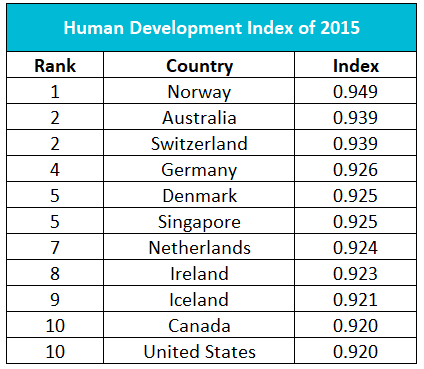