Examples of standardized products include agricultural products (such as grain and milk), most mined minerals, and fish. A buyer of wheat cannot tell who produced the bushels of wheat. Furthermore, the buyer does not care because the grains are identical. If several lobsters are placed in a tank, a buyer could not tell which lobster was caught by a given fisherman, nor would the buyer care. A buyer cares about the size and health of the lobster, not who provides it. 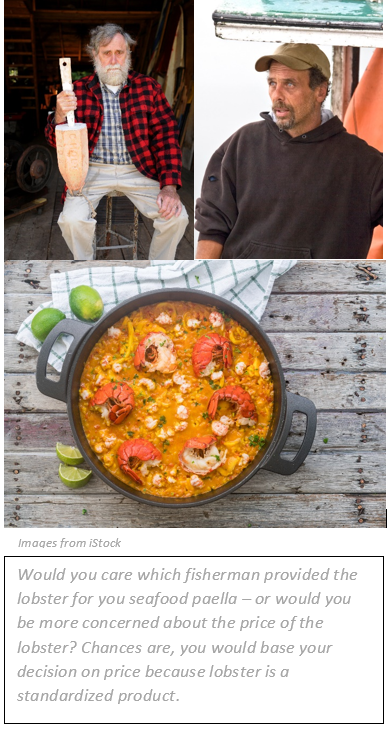 Another example illustrating the concept of product standardization is the market for the stock of a large publicly traded company. On December 21, 2018, there were approximately 4.3 billion shares of Coca-Cola Co. stock outstanding and there was absolutely no difference among the shares. Over 230,000 individuals and entities owned at least one share of Coca-Cola Co. Owning share number 100 carries the same per-share privileges as owning share number 1,000,000. This sameness is because the stock market determines share prices. When people decide to buy shares of a company, they have no reason to specify the share they want to buy. They also would not have to pay any more than that moment’s market price, and sellers have no reason to sell for any less than the market price.

A standardized product may also refer to industry guidelines of how a product or service is constructed or offered. An objective of standardization in an industry is to create a level of uniformity to foster compatibility, making it easier to use a product and increasing competition. For example, if an electrical item is purchased in Europe, chances are it will not work in the United States without the use of a transformer. This is because the standard for electricity in Europe is 230 volts and 50 hertz. In the US, the standard is 120 volts and 60 hertz. Most electrical goods sold in a country use the standard voltage for their region. This ensures that electrical goods purchased in a country can be easily used within the country.