Supply shocks may be brought on by sudden events such as natural disasters, wars, terrorism, or political decisions. The reduction in the supply of a commodity pushes up the price and reduces the quantity demanded, as shown in the graph below. 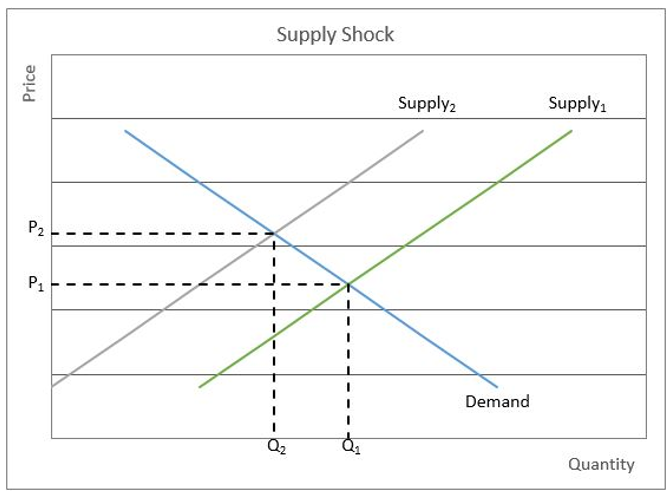 Supply shocks disrupt the supply chain. Manufacturers are not willing to produce as much at the higher cost unless they can charge a higher price and pass most of the cost through to their customers. The higher commodity price increases the production costs for manufacturers that use the commodity – which causes their supply curve to shift to the left.

A sudden increase in the price of a commonly used commodity can reverberate throughout the economy, resulting in a reduction in an economy’s aggregate supply. For example, when there is a disruption in the supply chain of crude oil, the increase in energy prices is felt by virtually every company. The Arab Oil Embargo between October 1973 and March 1974 contributed to annual inflation rates exceeding ten percent. The higher price lowers the quantity demanded by consumers, which leads to suppliers cutting production. In many cases workers are laid off. Real gross domestic product drops. Economists call these periods stagflation because the rising prices are combined with a stagnant economy. Fortunately, these periods normally do not last for very long. Companies are quick to adapt by either finding other suppliers or adapting their production. The graph below illustrates a period of stagflation triggered by a supply shock, where the short-run aggregate supply shifts to the left, resulting in a higher price level (P2), and lower output (RGDP2). 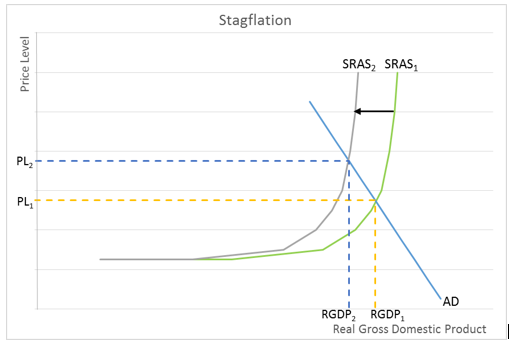 Supply shocks are normally associated with something bad happening—like the Arab Oil Embargo. However, the reverse impact happens following a significant decrease in the cost to manufacture most products. Technological advances could quickly trigger a positive supply shock if the advance is useful in most industries. For example, the widespread use of the Internet increased efficiency in most businesses, resulting in a lower cost of production. A positive supply shock decreases inflationary pressures while increasing its level of production.