A trade surplus occurs when a country’s balance of trade is positive. Countries with a trade surplus export more than they import.

A country's balance of trade measures the relationship between a country’s exports and imports. It is calculated by subtracting the value of imports from the value of exports. A country has a trade surplus when its balance is positive because exports exceed imports. A country has a trade deficit when its trade balance is negative. In this case, imports exceed exports.

The United States has had a trade deficit since 1975 when its reliance on foreign oil and rising oil prices contributed to the increased value of imports. The US has had a trade surplus for services every year since 1971, but the trade deficit for goods far exceeds the surplus for services. The graph illustrates the United States' balance of trade between 1960 and 2017. 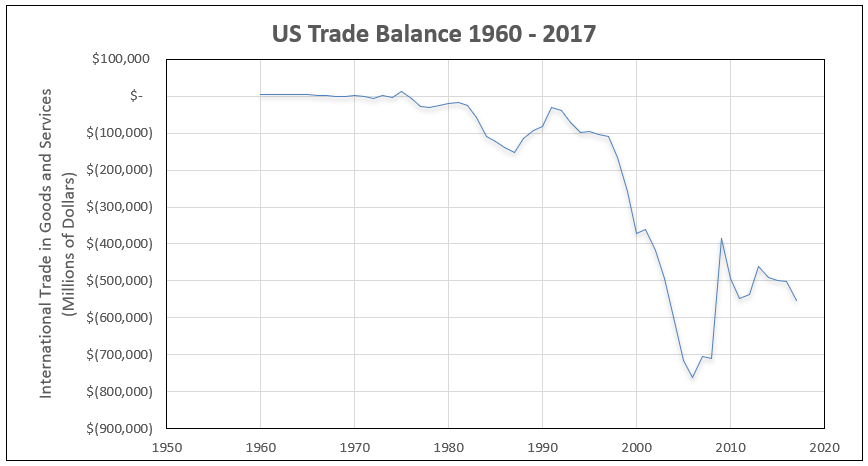 
What Causes a Trade Surplus or Deficit

Recessionary periods benefit from surpluses because the added exports create jobs and boost GDP. During business expansions, a trade deficit can be beneficial by reducing inflationary pressures because the imports add competition.

Some of the factors that influence the trade balance include currency exchange rates, differing comparative advantages, and trade barriers imposed by governments. As mentioned above, when a currency loses its value, that country's goods and services become less expensive in other countries, so exports should increase. Differing comparative advantages also influence trade. A country has a comparative advantage when the opportunity cost to produce a good or service is lower than another country. Perhaps one country has easy access to a vital raw material, or another country has a very highly educated workforce. Comparative advantages make trading beneficial for both countries by enabling countries to specialize in the production of the goods and services where they are the most efficient. Finally, government-imposed trade barriers, like tariffs and quotas influence the balance of trade. Negotiated trade agreements also influence a country’s balance of trade.