Variable costs are costs that are directly influenced by how much of a good or service is produced.

Economists separate business costs into two categories: fixed and variable. Fixed costs are unaffected by output, while variable costs are directly related to output. Examples of variable costs include raw materials, labor directly involved in the production process, packaging costs, sales commissions, and transaction fees. Examples of fixed costs include rent, insurance, salaries of essential personnel, and most overhead expenses. To distinguish between fixed and variable expenses ask, “Will this cost increase if more of a good or service is provided?” If the answer is “Yes”, then the cost is variable.

Some costs have both a fixed and variable component. For example, the utility cost that furnishes power for an office is fixed; but the cost to power machines and equipment to build something is variable. An increase or decrease in production would not have much effect on the electrical power consumption in an office, but the cost to power machinery could change dramatically if a plant went to a second or third shift. In the long run, all costs are variable. For example, insurance is a fixed cost, because the premium is normally not affected by the production level, but an insurance premium may change from one period to the next. In an extreme case, a business may choose to close and eliminate all its fixed costs. Most fixed costs are time-related, such as annual salaries, or monthly rent. 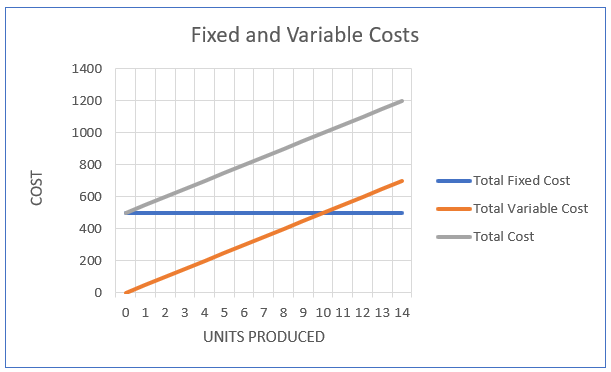 Assume you are considering opening a small ice cream parlor. Understanding your cost structure can help you quickly estimate your profit at different outputs. After doing some research you estimate your total monthly fixed expense would equal $1,100. This includes rent, office utilities, and other overhead expenses. Your variable cost would be approximately $1.20 per scoop. This includes the cost of ice cream, cups, napkins, and labor. You plan to charge an average of $2.50 per scoop. How much would you earn if you sold 5,000, 7,500, or 10,000 scoops in a month? The table below summarizes your estimates. Note that your fixed costs remain constant and your variable costs are directly related to the number of scoops you sell.

Variable costs have a direct impact on a company’s break-even. If the variable cost increases, more of a good or service would need to be produced to achieve break-even unless there is an increase in the price or reduction in the fixed costs.