Tuesday, January 31, 2017
Last week the Dow Jones Industrial Average topped 20,000 for the first time. I predict it will reach 40,000 by 2026. Sounds crazy, doesn't it? Well, not really when you consider the power of compound interest. The table below provides the closing Dow Jones Industrial Average on the trading day closest to January first of the given year. (The New York Stock Exchange is closed on January 1st.) For example, if January 1st fell on a Friday, I used December 31st of the preceding year.

Take a look at Table 1. The Dow doubles during most decades, with an average 10 year appreciation of 86% over the past century, or an 8.6% annual increase. Table 2 projects the Dow, assuming it increases 8.6% every year. Note that it hits 40,000 in 2026. In fact, the Dow could average a 7.4% annual return and reach 40,000 by 2027. Of course, there will be some years when the average grows less than 8.6% and others when it appreciates more than 8.6%. Our assumption is its average annual appreciation equals to the average for the past century. 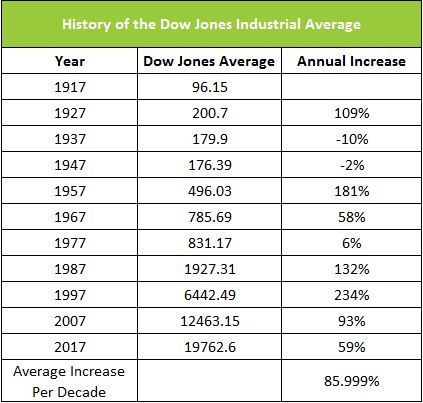 This is a lesson in the power of compound interest and the Rule of 72. Investors use the Rule of 72 to estimate the number of years it will take to double an investment. Simply divide 72 by your estimated return. For example, if the annual return equals 7.2%, it will take 10 years to double your investment. The Dow has averaged an 8.6% return, so using the Rule of 72 confirms that the Dow Jones Industrial Average should reach 40,000 in less than a decade if it continues to appreciate as in the past. For a calculator showing the power of compound interest go to The Council of Economic Education. 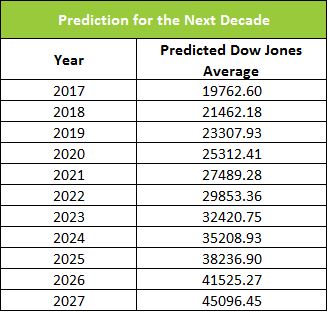 Of course, there are decades when the Dow Jones Industrial Average has appreciated less than the average, and there is not guaranty that history will repeat itself. However, I am betting it does. If correct, I will remind you of this blog in 2026, but if I am wrong, I won't mention it!