Tuesday, August 08, 2017
Imagine that your country controls the largest proven oil reserves in the world. Yet your country is in a prolonged recession. Its real gross domestic product has declined 35% since 2013, the inflation rate exceeds 1,500%, and you cannot find a job because the unemployment rate is approximately 21%. Food and medicine are in short supply, so you spend hours several days a week waiting in long lines in hopes of purchasing your next meal or medicine for a family member. Power outages are a daily occurrence. Venezuelans have experienced such a nightmare for many years, and it is getting worse. For a heart wrenching story on Venezuelans' suffering read Juan Forero's story Venezuela is Starving published in The Wall Street Journal on May 5, 2017. Tragically, virtually all these troubles were avoidable (or at least could have been diminished) if the leadership had a better understanding of some basic economic principles. Here are just a few economics lessons they ignored.

Venezuela has the largest proven oil reserves in the world. (Follow the link CIA The World FactBook for a list of the countries with the greatest reserves.) Oil has played a dominant role in Venezuela's economy for many years. Petroleos de la Venezuela S.A. (PDVSA) was a well-managed oil company in the 1980s and 90s. It was profitable and attracted many foreign partners that were willing to invest capital and expertise in developing Venezuela's oil fields. That ended after Hugo Chavez was elected in 1998. He nationalized the privately-owned fields shortly after he assumed office. The company's decline was not immediate, but within a few years, the PDVSA changed dramatically. Chavez regarded PDVSA as his piggybank to fund his social programs. Oil revenues account for approximately 95% of Venezuela's hard currency.

Under Chavez, Venezuela expanded low-income housing, made healthcare and medicine accessible to much of the population, and subsidized food distribution for those in need. These programs, especially in rural areas, made social services and government jobs available to large swaths of the population, resulting in a drop in the poverty rate from 48.6 percent in 2002 to 29.5 percent in 2011. The infant mortality rate also declined while literacy rates and access to free public education increased, according to data aggregated by Index Mundi. Valentina Perez, Harvard Political Review, April 30, 2013


However, in the process President Chavez killed his golden goose and started the demise of the Venezuelan economy. In 2002, PDVSA workers actually went on strike! As a result, Chavez fired many of the best managers and replaced them with politically loyal people who did not know how to manage an oil company. For a detailed report on the demise of PDVSA read Oil's Dark Secret, published August 10, 2006 in The Economist.

Lower oil prices have resulted in lower profits and less money to fund social programs, but lower prices alone doesn't explain the reduction in capacity and the unwillingness to replace equipment. PDVSA profits in the first three months of 2016 were down 63%, while sales fell 33%. (Reuters) Bloomberg reported in Venezuela's Fuel Shortage is Getting Worse that there are gasoline shortages in Venezuela. Venezuela's president, Nicolas Maduro, was handpicked by Chavez and continues to follow his destructive policies.

An economy should not be built on one resource – even if it is oil. The Chavez strategy did not fail immediately because oil prices were high enough, and much of the technology was in place. However, rather than using the proceeds to encourage the development of other industries, Chavez continued to siphon off cash to pay for his social agenda. The economy and federal subsidies are totally dependent on the sale of oil, so when oil prices fell from over $100 a barrel to under $40 a barrel Venezuela's primary source of cash dwindled. This was exacerbated because neglect of the equipment reduced PDVSA's capacity, which meant oil production fell. If nothing else, the government should have saved for a "rainy" day.

The government should have also diversified Venezuela's power supply. Venezuela relies on hydropower for approximately 70% of its electricity. The supply of water, or any renewable resource, is unpredictable. Sadly, Venezuelans have endured power outages for many years. The government blames "political opposition" and El Nino for a drought which has drastically reduced water levels in the country. Frankly, the government should take responsibility. It manages the electrical grid. Its failure to diversify has left the country's power supply vulnerable to droughts. Shortages have forced the government to schedule rolling blackouts of four hours per day. Today, the cash strapped government has more urgent needs than to invest in capital, which will take years to complete. Meanwhile, people suffer, and businesses must close when they are desperately needed to revive the economy. NPR

Meanwhile, the public grew accustomed to their entitlements. How does a government placate its citizens during troubled times? Give them the things they need. This is especially true in a country where the "Revolution" has been built on using money from an oil company to give to its citizens. But how can these entitlements be paid for? Print money. Throughout history governments have printed money when they find it difficult to pay for goods or services they need. The Colonials printed money to help finance the Revolutionary War in the United States. Germany printed money following World War I. The result is hyperinflation. Venezuela has been importing plane loads of money recently. This Bloomberg article, Venezuela Doesn't Have Enough Money to Pay for Its Money, speculates that the government may not have enough money to pay for its money! (Bloomberg, April 27, 2016) The CIA estimated prices rose 720% in 2016, and the International Monetary Fund predicts inflation will jump to 1,642% in 2017! To put that in perspective, assume a meal at a restaurant cost 100 bolivars at the end of 2015. That same meal would cost 720 bolivars at the end of 2016, and is expected to cost 11,822 bolivars by the end of 2017.

A basic economic formula economists use to estimate inflation is M x V = P x Q, where M is the money supply, V is the velocity money is spent, P equals the price level, and Q is the quantity of goods produced. Let's take a closer look at how each of these variables impacts P, the price level. The money supply is being increased significantly. Hyperinflation creates an incentive to spend as soon as a person receives money. (You buy today because the price is going up tomorrow.) This increases the velocity of money. The quantity of goods produced has decreased since the economy is in a recession. P must increase dramatically to balance the equation. (Read our lesson Causes of Inflation to learn more.) The table and graph below was copied from a Wall Street Journal article and illustrates the growth of the money supply and the increase in the price of some basic goods between 2014 and 2015. Unfortunately, inflation is worse today! 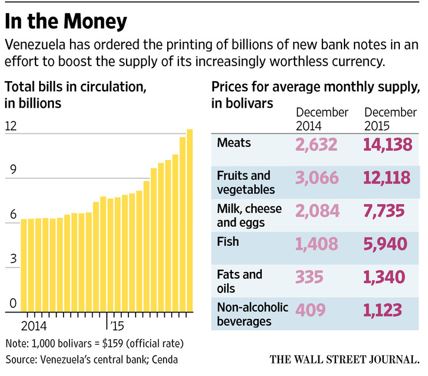 Inflation reduces the value of a currency, and hyperinflation makes it almost worthless. Recently, President Maduro announced a devaluation in the bolivar exchange rate, but he refuses to recognize the true value of the bolivar. (Fred Imbert, CNBC March 28, 2017) He placed the "official" value of $1 at 710 bolivars. The black market's value is more realistic -- $1 to 3,000 bolivars. A weaker currency results in higher import costs, which is very inflationary in a country that is so dependent on imports, like Venezuela. Maduro's action is too little too late.

Foreign companies are less willing to sell to Venezuelan companies if they are forced to sell at the official rate because they are selling for less than the market rate. Maduro's failure to acknowledge this reality has resulted in shortages of imports, while providing an incentive for selling and buying in the black market. Many businesses have recently left Venezuela because they have had trouble securing the raw materials they need at reasonable prices. (FoxNews.com) A few of the well-known companies that have left or shut down temporarily include General Motors, Colgate-Palmolive, Kimberly Clark, General Mills, and Pirelli Tires.

Some corrupt government officials have profited by taking advantage of the spread between the official and black market exchange rates by buying dollars at the official rate and then selling them on the black market.

The most basic law of economics is supply and demand. When the price is set too low, suppliers are not as willing to supply a good or service and shortages develop. (To learn more about Supply and Demand visit any of our eleven free lessons at Supply and Demand.)

Extremely low prices set by the government for electricity, food, and medicine resulted in bare shelves and long lines in grocery stores. In "helping" the poor, the government set prices well below their equilibrium. Producers could not make a profit at the low prices, and were eventually forced to close their businesses. Prices for everything from medicines to toilet paper were controlled by the government. (CNN Venezuela Bread Shortage.) Shortages spawn black markets. Indeed, black markets for many items continue to thrive in Venezuela.

The most important lesson is - do not ignore the markets. Government needs to limit its interference. Forbes ranked the best countries for business in 2016. Venezuela ranked 135th out of 139 countries. I bet it would be lower today.

The Atlantic reported in May 2016 that an entrepreneur feared he would lose his business because he could not purchase toilet paper for his business. Apparently, not providing toilet paper is a violation of his labor agreement. He is afraid the government would use the violation as an excuse to take over his business. The government has expropriated over 1,500 privately owned businesses according to an article in The Economist. It has even threatened Empresas Polar SA, the largest privately owned business in Venezuela, and a leading producer of beer and foodstuffs that are in short supply. Venezuela has been ranked as one of the most corrupt governments by Transparency International. Who would want to open a business in such an environment?

Ignoring markets has increased the poverty rate. Between 1999 when Hugo Chavez took office and 2015 the poverty rate has increased from 55% to over 70%, according to an article published in The Economist. I believe it is worse today. (The government has provided few reliable figures since 2014.) 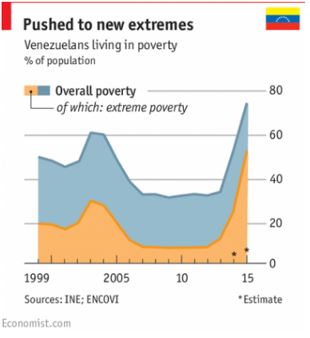 I wonder how many economists advise the President. Mr. Maduro step aside and let someone who understands economics govern. At the very least, I suggest you take Higher Rock Education's course. It is absolutely free!

In the next few weeks we will post several personal stories from Venezuelans. Please lift Venezuelans up in your prayers. They need them.