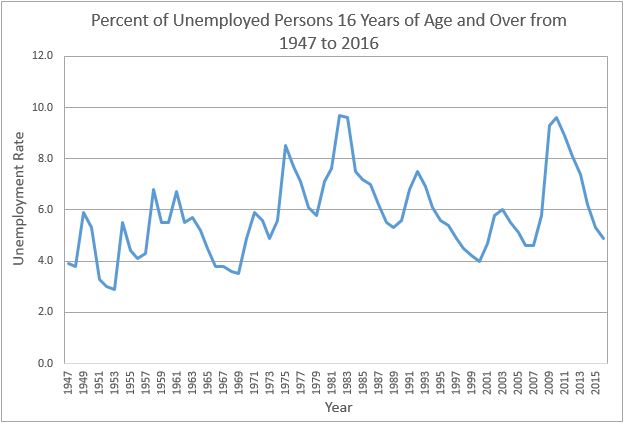 Who is classified as unemployed?

The Bureau of Labor Statistics defines an unemployed person as:

Persons aged 16 years and older who had no employment during the reference week, were available for work, except for temporary illness, and had made specific efforts to find employment sometime during the 4-week period ending with the reference week. Persons who were waiting to be recalled to a job from which they had been laid off need not have been looking for work to be classified as unemployed. BLS Glossary

To be classified as unemployed, a person must be at least 16, not have a job, be willing to work, and done at least one thing in the prior four weeks to prove he or she is actively looking for a job. Frequently the unemployment rate will increase when the economy begins to improve and people find jobs. Why? Because a healthy economy pulls workers back into the labor force. Returning workers were not considered unemployed before if they are seeking employment for the first time in a long time. It is important to read the change in the labor force when analyzing an unemployment rate.

Who is frictionally unemployed?

Assume you are employed, but dissatisfied with your work. You choose to seek other opportunities, confident you will be able to find another job soon. You would be frictionally unemployed after resigning from your job.

Workers change jobs. People enter and reenter the work force, such as students seeking a job following graduation, or mothers reentering the labor force. It takes time to match potential employees and employers. The applicant must search for a job, apply, and probably interview for a job. Employers may want to consider many applicants. This is a period of frictional unemployment.

Frictional unemployment can be reduced by decreasing the time it takes for job seekers to find a job. Job placement companies such as Monster and CareerBuilder have improved the efficiency of identifying potential jobs.

Who is structurally unemployed?

Many structurally unemployed become long-term unemployed when they become discouraged that the demand for their skills is gone or diminished to a point where they are unable to earn what they were accustomed to. Sadly, many give up and choose to not seek employment until the economy improves or an opportunity presents itself. These individuals would not be considered "unemployed" by the Bureau of Labor Statistics.

Technology has displaced workers for centuries. Agricultural equipment has replaced sharecroppers. Word processing software, answering machines, and other office technology has replaced many secretaries. Historically, workers have adjusted by acquiring new skills for new jobs. But as jobs become more complex and require more training it becomes harder to find new jobs. Structural unemployment occurs when the skills of a worker become obsolete and are no longer in demand due to advanced technologies. Jobs are available, but there is a disparity between the skills required and what the workers can offer, or between the location of the job and the inability of the worker to move to the area. For example, the demand for people manning a drill press is less, while the demand has increased for computer programmers to program the robot that has replaced the drill press operator. Unfortunately, the drill press operator may not have the skills to program the robot.

Management may choose to move manufacturing following a trade agreement, tax policy, or regulations that increase cost. Each of these actions could potentially increase structural unemployment in a region.

Who is cyclically unemployed?

Expansionary fiscal and monetary policies can be used to increase the economy's aggregate demand and return many of the cyclically unemployed back to work. The Federal Reserve may increase the money supply to lower interest rates, which in turn makes business borrowing more attractive. Congress may choose to stimulate the economy by increasing spending.