After being adjusted for inflation, spending increased the most since January and has lifted the economy from its brief downturn in the first quarter. Shoppers are traveling, attending shows, and dining out, activities they avoided during the pandemic. Supply bottlenecks have improved, and car buyers have responded with a large increase in purchases. Consumer spending is the most significant component of GDP, comprising over sixty percent of the US gross domestic product, so consumer spending must continue to increase to sustain the current recovery. However, as evidenced by increased consumer spending, rising demand also adds inflationary pressures. Much of the increase in demand probably stems from people feeling released from COVID imposed restrictions and the need to travel and have fun.

Is the US economy growing too fast? Is continued growth in consumer spending sustainable? The Personal Income and Outlays report provides hints that help answer these questions. 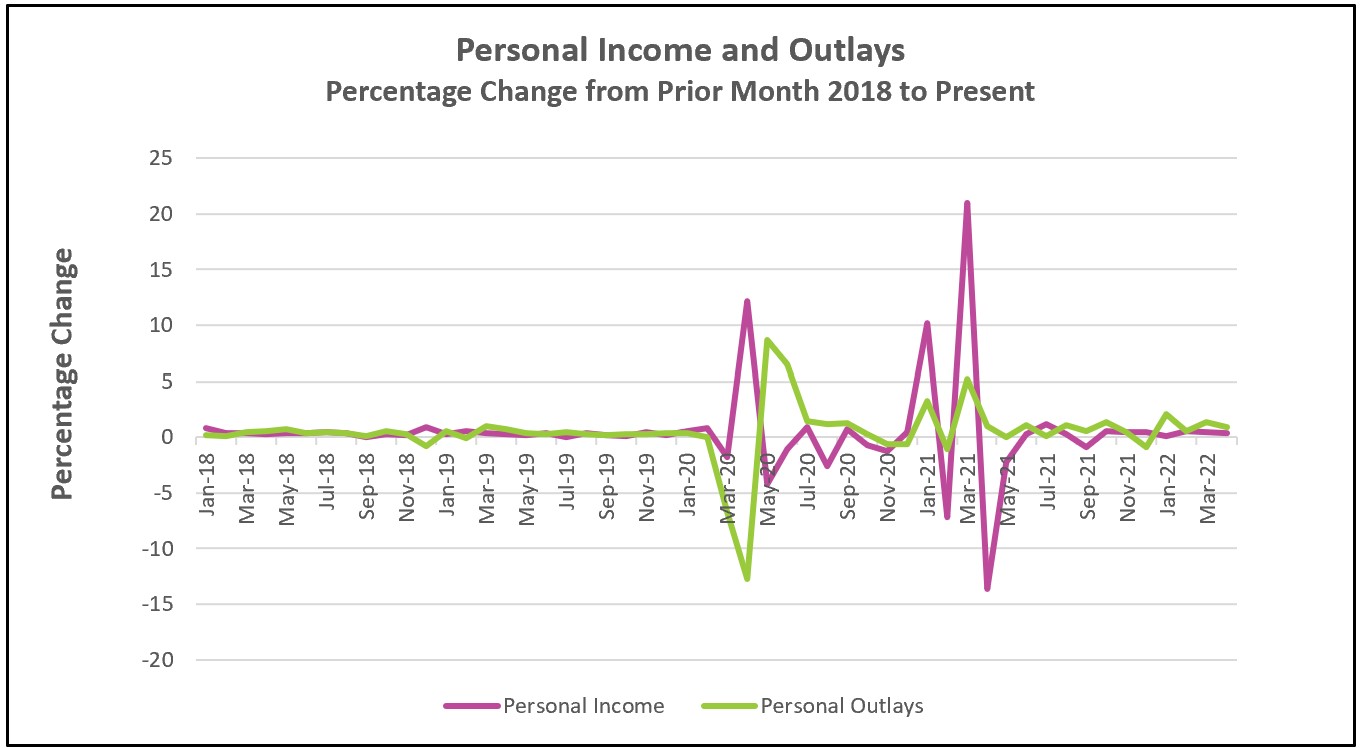 Read the Bureau of Economic Analyses’ full report Personal Income and Outlays – April 2022. The highlights are listed below.

Personal income, debt, and savings provide the money to spend. Reviewing trends in each of these helps economists discern whether continued growth in consumer spending is sustainable.

Income: The job market is strong. Employers are raising wages to attract workers. Last month wages and salaries rose 0.6%. But household disposable income barely kept pace with inflation, which is an improvement. The April increase in personal disposable income was only the second month since July 2021 that real disposable income increased or remained unchanged.

Debt: The Federal Reserve reported that in March, revolving accounts, which are mainly credit cards, increased at an annual rate of 35.3%, up from 16.2% in February and the largest monthly increase since 1998. When the price of necessities such as food and gas increases faster than income, it makes consumers more likely to dip into their savings and credit lines.

The Federal Reserve policymakers prefer the PCE price index to the more widely published consumer price index. (This contrasts with the consumer price index, which rose 8.3% in April.) The PCE index cooled slightly in April after rising to its highest level since 1982 in March. April’s drop was the first since 2020. Much of April’s fall in the overall index resulted in a decline in gasoline prices, but gas prices have since increased to record levels. Food prices have also climbed. However, gains in the core index, which excludes food and energy prices, have remained at 0.3% for three months. Inflation remains significantly above the Federal Reserve’s 2% target. Cooling inflation is essential for the economy to continue its progress.

Policymakers believe the economy is growing too fast and increased its benchmark rate to diminish inflationary pressures, and they plan several additional hikes in the next few months. But this report suggests that recent trends will continue and the economy will grow through the second quarter and then begin to cool in the third quarter. The pent-up demand for travel and other activities will eventually diminish. Households will increasingly cut back as they dip into savings and credit.

The Bureau of Labor Statistics will release its Employment Summary for May on June 3. It will provide valuable insights into the strength of the labor market, wages, and recovery. Check back to HigherRockEducation.org for our summary and analysis of this important data.