Consumer demand continues to grow, providing assurances that the nation’s prosperity should continue. Despite a surge in omicron cases, consumer spending, which is approximately 70% of economic activity, grew at the fastest clip since March 2021. But the COVID variant, which peaked in January, did restrain growth at in-person events. Most of the spending increase was for goods, especially motor vehicles and parts.

Incomes were flat, primarily because the Child Tax Credit payments ended. Wages and salaries continued to increase because the labor market remained tight. However, the growth rate of disposable income after inflation continued to be less than the inflation rate. That means families have less buying power and save less to support their spending. The problem is getting worse, with the inflation rate at more than three times the Fed’s 2% target, and gaining momentum. The 12-month inflation rate increased or remained the same every month since November 2020, when it equaled 1.2%. 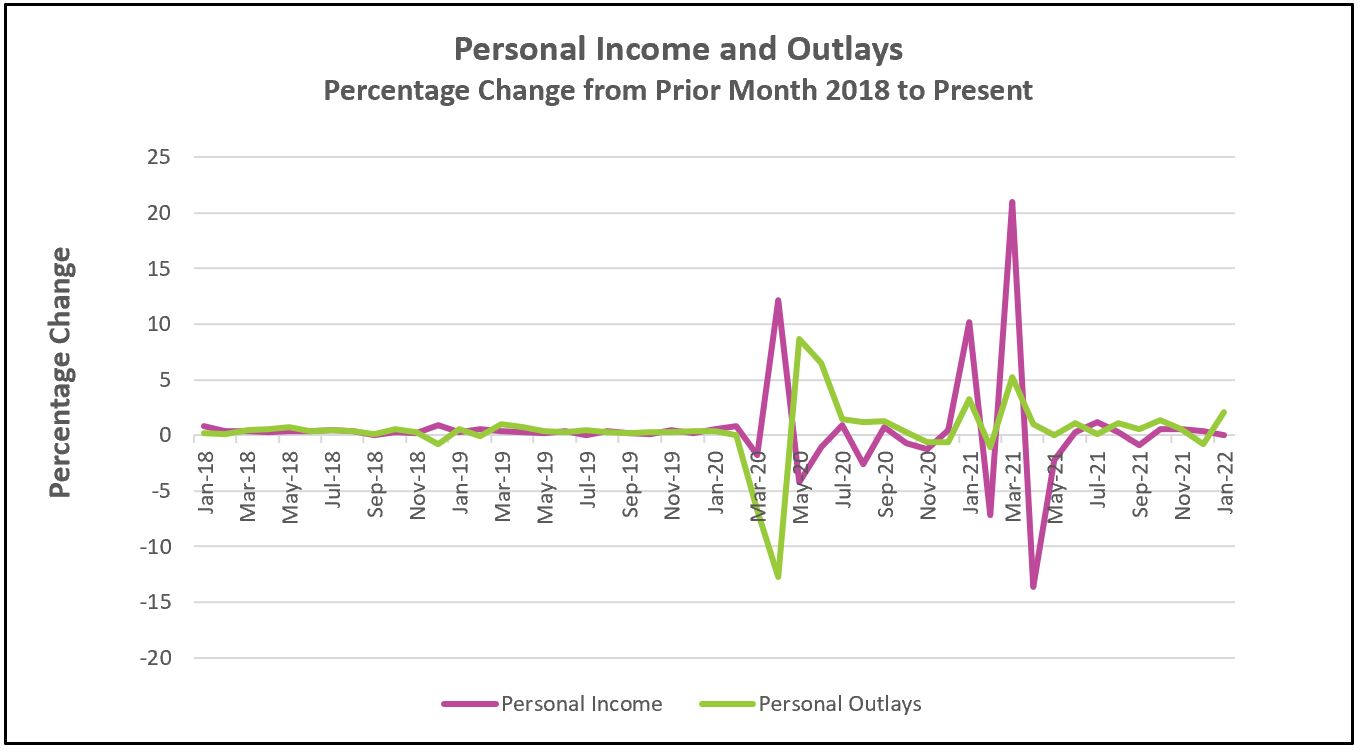 Accumulated savings financed much of the spending increase. The savings rate fell to 6.4% of after-tax income, the lowest level since 2013. Savings reached 33% during the pandemic when the federal government doled out billions of dollars in assistance, and families spent less on eating out, vacations, and other face-to-face activities.

Read the Bureau of Economic Analyses’ full report Personal Income and Outlays – January 2022. The highlights are listed below.

The Russian invasion of Ukraine will impact the US economy. It has already driven gasoline prices higher. Fed policymakers will likely stick to their plan to increase interest rates in response to escalating prices. The invasion adds inflationary pressures, but it may also slow the economy. For example, higher energy prices mean less money is available to spend elsewhere. Trade will be disrupted, especially with the European countries. Russia is the primary oil and natural gas supplier to most European nations. Shortages will raise prices, but they may also restrict production if a lack of energy forces plants to cut back. Fear may discourage buying if people fear losing their job.

The Bureau of Labor Statistics will release its Employment Summary for February on March 4. It will provide valuable insights into the impact of the Omicron variant on employment and wages. Check back to HigherRockEducation.org shortly after it is released for our summary and analysis.