The economy’s vital signs are improving. The American worker’s income gained more than it lost to inflation in July for only the fourth time in a year. However, the improvement is tenuous because the primary reason real income increased is a drop in gasoline prices, a commodity vulnerable to rapid price swings. Fortunately, other more stable factors such as an overheated demand and supply chain disruptions appear to be improving, sparking hope that inflationary pressures are easing. Nevertheless, inflation remains well above the Federal Reserve’s goal of a 2% annual rate, making it very unlikely that the Fed will change its strategy of lifting interest rates anytime soon. 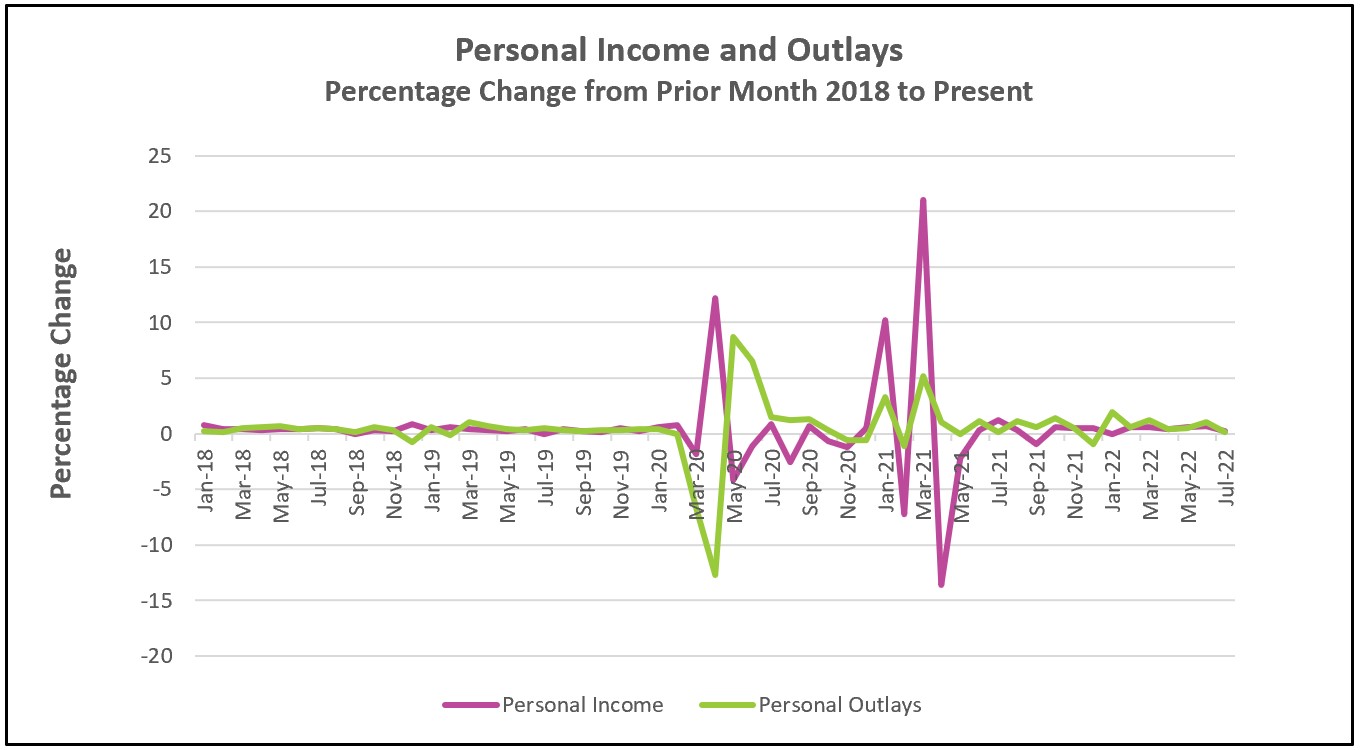 Read the Bureau of Economic Analyses’ full report Personal Income and Outlays - July 2022. The highlights are listed below.

During the second quarter, the economy contracted 0.6% (revised upward from a 0.9% decline). However, a larger contraction was prevented by a strong labor market yielding significant income increases that helped propel consumer spending gains. These trends helped ignite inflation. Policymakers at the Federal Reserve responded with continued significant increases in its benchmark rate to reduce the economy’s aggregate demand. It appears that their strategy is beginning to work. Inflation started to ease at the beginning of the third quarter, helped by less spending.

Income gains were lower in July, rising 0.2%, following a 0.7% increase in June. Wages and salaries increased 0.83% in July, the most since February, indicating that businesses continue to bid up wages to attract and retain qualified workers. However, small businesses struggled. Proprietor nonfarm income fell 1.24%, suggesting that small businesses were impacted by higher costs, particularly wages.

For many months before July, rising incomes, record savings accumulated in the early stages of the pandemic, and pent-up demand for travel and other services following the pandemic supported the growth in consumer spending. However, the income gains were less than inflation, reducing consumer buyer power and making continued growth in aggregate demand unsustainable. These months caught up with households in July, despite the increase in real income. Consumer spending only increased 0.1% after jumping 1% (adjusted down from 1.1%) in June. Consumers spent more on services and durable goods and less on nondurable goods such as gasoline. High inflation levels, a drop in consumer sentiment, and the wearing off of the pent-up demand for travel following the pandemic probably contributed to the drop in demand.

In July, a combination of higher incomes and falling prices gave consumers increased buying power. However, as mentioned above, the gains may be short-lived because they are tied to the drop in gasoline prices. A fall in the core index suggests that moderating inflation is more widespread. More importantly, the core index also eased. Economists consider the core index a more reliable gauge of inflationary trends because it does not include volatile food and energy prices. The core index gained 0.6% in June and 0.1% in July. When measured over the prior 12 months, the core index slowed from 4.8% to 4.6%.

Earlier this month, the Bureau of Labor Statistics reported that July’s inflation rate equaled 8.5%. Today, the BEA reported that prices rose 6.3%. What is the difference? The CPI measures the difference in the cost of a market basket of goods and services. The composition of the basket rarely changes. The PCE price index accounts for changes in people’s spending patterns. For example, if households purchase more chicken following an increase in the price of beef, chicken is given more weight. Recently households began substituting less expensive store brands for name brands. Substituting lower-priced items helps restrain inflation. The Federal Reserve prefers the PCE price index because policymakers believe it more accurately reflects consumer behavior. (Another reason for the difference is that the CPI gives more weight to rents, which recently soared.) Nevertheless, 6.3% is significantly higher than the Fed’s target of 2%. Chairman Powell reaffirmed in his speech this morning in Jackson Hole, Wyoming, that price levels are unacceptable and the Fed will continue raising rates.

The future trend in consumer spending will determine the economy’s path toward recovery. Will higher interest rates cut the aggregate demand enough to stifle the recovery? Will a tight labor market continue to push incomes higher, making the policymaker’s job to contain inflation more difficult? We will get some inkling of employer sentiment and employment when the Bureau of Labor Statistics releases the Employment Summary for August on September 2nd. Reviewing the labor market’s strengths will provide valuable insights into the future direction of prices and the economy. Check back to HigherRockEducation.org for our summary and analysis of this important data.