Compensation jumped sharply in March and helped households to continue spending. But the increase was less than inflation, thereby reducing consumer buying power. Fortunately, families are financially healthy. They increased saving during the pandemic. But the savings rate has fallen to its lowest level since 2013. Economists wonder if inflation will force households to cut back to the point that slows consumer spending and pushes the economy into a recession. 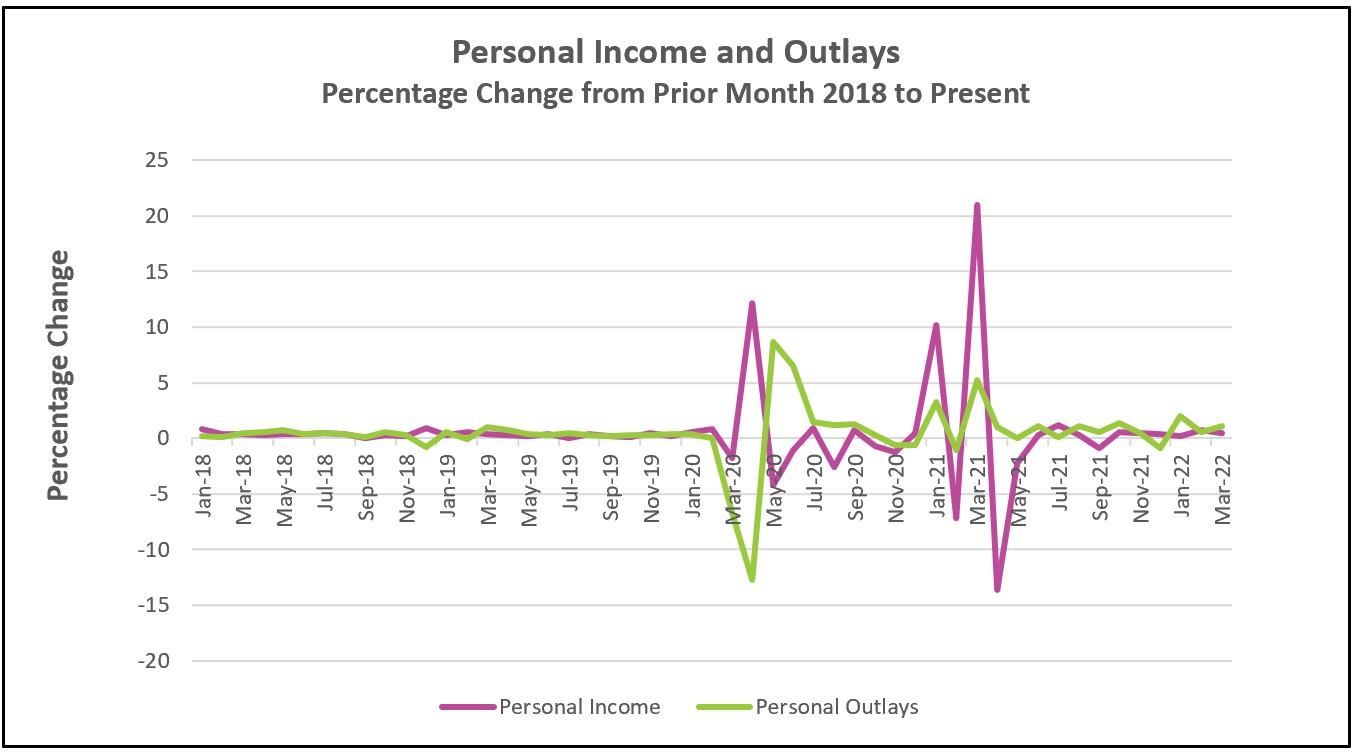 Read the Bureau of Economic Analyses’ full report Personal Income and Outlays – March 2022. The highlights are listed below.

Last Thursday, the BEA reported that the US economy contracted at an annual rate of 1.4% during the first quarter. Fewer exports relative to imports and lower inventories were the primary reasons. Most economists believe it is unlikely the economy has entered a recession because consumer spending remains positive, which is critical since it comprises 70% of the US economy. Consumer spending outpaced inflation for three consecutive months, but consumers are dipping into their savings. Households accumulated $2.1 trillion in savings during the pandemic.

Spending patterns have changed. The pandemic confined consumers to their homes, so they spent lavishly on durable goods such as furniture and home improvements. Service industries suffered. But recently, pent-up demands for dining out, travel, and attending live events have increased spending on the services, while spending on durable goods such as motor vehicles fell for the fourth time in five months. Spending on nondurable goods like gasoline and food increased primarily because the prices of these necessities increased dramatically.

Meanwhile, inflation continues to worsen. The growth in consumer spending has partially caused inflation because it increases the economy’s aggregate demand. That, in turn, feeds demand-pull inflation when a buildup in supply cannot meet a rising demand. Supply bottlenecks continue to impede production. Russia’s invasion of Ukraine has obstructed the delivery of energy and many grains. Labor shortages have driven wages higher. Prices have surged 6.6% over the past year.

Competition among employers for qualified workers is fierce because job openings far exceed available workers. The Bureau of Labor Statistics recently reported that there were 11.3 million job openings but only 6.3 million unemployed workers seeking work in February. Companies have raised wages and benefits to attract and retain workers. Salaries continue to grow – up 0.5% in March and 1.4% in the first quarter. Higher costs for transportation and parts have also crimped profit margins. Many businesses have responded by raising their prices, and consumers seem to understand and accept the higher prices.

Yet, increases in wages remain less than inflation. In the past year, wages and benefits have increased 4.7%, but they are down 3.7% after adjusting for inflation. Dramatic increases in energy (33.9% in the prior 12 months) and food costs (9.2% in the preceding 12 months) have been a hardship to many families by substantially reducing their spending power. Expectation and acceptance of higher prices can lead to a dreaded inflationary spiral that is hard to contain. Eventually (if it hasn’t already), this will lessen the demand and consumption of other nonessential goods and services. The Fed’s difficult challenge is to lower inflation while not tipping the economy into a recession.

There is some hope that inflation has peaked. The core index, which excludes food and energy, shows signs of peaking. The 12-month increase declined for the first time since February 2021, falling from 5.3% to 5.2%. Monthly figures have also trended lower. The core index increased 0.5% from October through January but has since slowed to a 0.3% increase. However, both indexes remain well above the Fed’s 2% target, and policymakers will not be dissuaded from increasing interest rates by a minimum of one-half a percent.

How long can and will consumers continue to support the economy while their buying power diminishes? Hopefully long enough to prevent another recession, but that will depend on the Federal Reserve’s ability to lower inflation.

The Bureau of Labor Statistics will release its Employment Summary for April on May 6. It will provide valuable insights into the strength of the labor market, wages, and recovery. Check back to HigherRockEducation.org for our summary and analysis of this important data.