Demand is Subsiding, But Inflation Remains Too High

The Federal Reserve has been increasing interest rates to slow the growth in aggregate demand and tame inflation. Their challenge is to do so without triggering a recession. May’s spending figures released yesterday by the Bureau of Economic Analysis suggest that the Fed is succeeding in curbing spending. Fed officials were encouraged by a drop in the core inflation rate to its lowest rate since November 2021. But inflation remains too high, and the risk of a recession is increasing. Both gains in spending and income failed to keep pace with inflation. 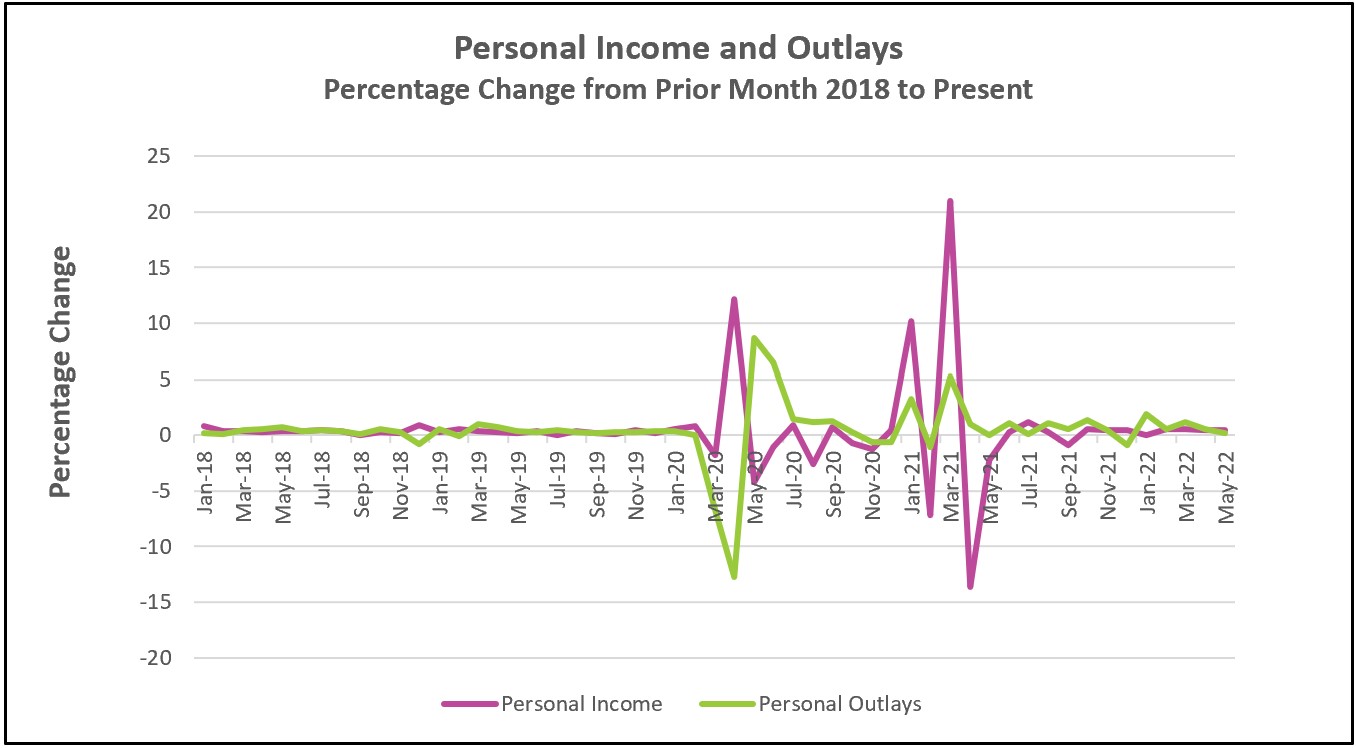 Read the Bureau of Economic Analyses’ full report Personal Income and Outlays – May 2022. The highlights are listed below.

Consumer spending has supported the US recovery. Since July 2021, the growth in consumer spending has consistently outpaced growth in after-tax income. That is until May. Real spending decreased 0.4% in May, while disposable income increased 0.5%. Consumers continue to substitute services for goods. May’s spending on services, including housing, travel, and dining out, rose 0.3% after adjusting for inflation, while purchases for goods such as new cars decreased 1.6%.

Accumulated savings continue to support the economy. The savings rate fell slightly from 5.7% to 5.4% but remained significantly above the 7% rate before the pandemic. High inflation levels and the gap between income and spending have forced many Americans to dip into savings to finance their spending. At the current rate, many economists believe that by Labor Day, most households will have spent the savings they accumulated from the government handouts during the pandemic.

Will consumer spending continue to grow at a slower pace? Will incomes fail to match inflation? If these trends continue, will the economy be pushed into a recession? The data released yesterday is unlikely to sway the Fed from continuing to raise interest rates at their July meeting. Inflation remains too high. It is the primary concern of consumers. The University of Michigan Consumer Sentiment Index fell to a record low. The survey concluded…

About 79% of consumers expected bad times in the year ahead for business conditions, the highest since 2009. Inflation continued to be of paramount concern to consumers; 47% of consumers blamed inflation for eroding their living standards, just one point shy of the all-time high last reached during the Great Recession.

The PCE price index for all items rose at an annual rate of 6.3%, well above the Federal Reserve’s 2% target. Energy prices gained 35.8%, while food prices rose 11.0%. Higher prices in necessities such as food and gasoline are more likely to cause a recession than higher prices of other goods and services by forcing consumers to make difficult decisions. Consumers have cut back on the volume of gas they purchase, but they are still spending more. Consumers may buy a lower cut of meat or an off-brand cereal, but most likely, they are spending more on food than several months ago. These trends reduce the income available to spend on other items and the demand for those goods and services, which partially explains the smaller increase in the core inflation rate. The core rate rose 4.7% from a year ago, the smallest jump since November.

The job market remains strong but will likely subside soon if consumers restrain spending. Income gains continue to be less than inflation. Wages and salaries were up 0.5%, the smallest increase since January. Real disposable income has fallen every quarter since the first quarter of 2021. If declining sales spark layoffs or reduced hours, households might tighten their belts further before their hours are cut if they fear a drop in income. Such a cycle would fuel a recession.

It is becoming increasingly likely that the economy is already in a recession. GDPNow estimates a 1% contraction in the second quarter, following a 1.6% fall in GDP during the first quarter. (The BEA revised its first-quarter estimate from a contraction of 1.4%.) While GDPNow is an unofficial forecasting model, its estimate uses current releases. Many economists consider two consecutive contracting quarters as a recession. Officially, the National Bureau of Economic Research identifies the beginning and end of different phases of a business cycle.

The Bureau of Labor Statistics will release its Employment Summary for June on July 8th. Reviewing the labor market’s strength will provide valuable insights into whether the economy will continue its slowdown. Check back to HigherRockEducation.org for our summary and analysis of this important data.