Wages Keep Pace With Inflation But Not Consumer Spending

Americans are saving less and spending more. Disposable income also rose and barely kept pace with inflation. However, spending exceeded disposable income, forcing many to dip into their savings and credit. Spending on essentials such as rent and commuting to work rose the most, partially because rental rates and transportation prices were among the services with the greatest increases. 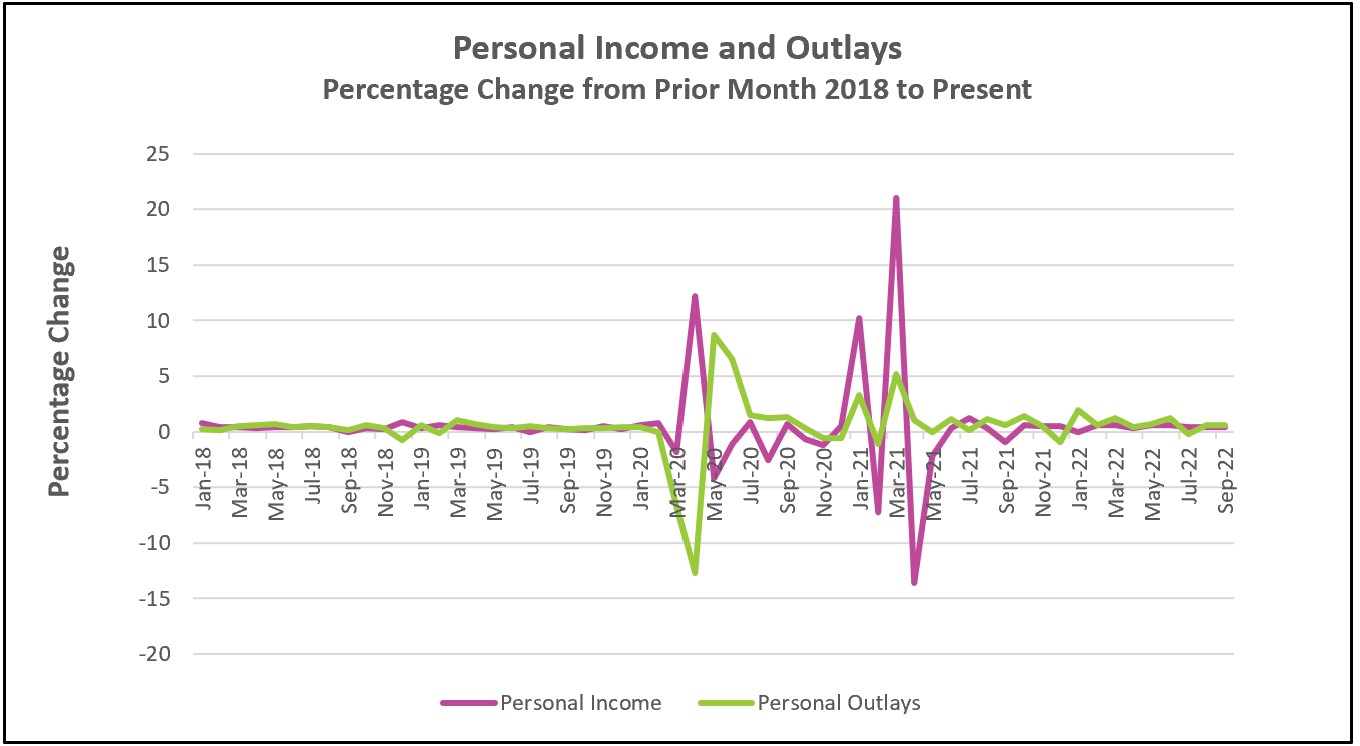 The highlights of the Bureau of Economic Analyses’ full report, Personal Income and Outlays – September 2022, are listed below.

American consumers continue to do their part to prevent a recession. However, in the process, they are making the Federal Reserve’s job of taming inflation more difficult. Consumer spending increased by 0.6% in September. The increase in aggregate demand helped push prices up 0.3%, as measured by the personal consumption expenditure price index.

Consumers continue to change their spending patterns from goods to services. Good purchases increased by 0.3%, while consumers spent .8% more on services. Net travel was 20% higher, and housing and utilities increased by 1%.

There is little evidence that monetary policy is beginning to lower prices. Both the all-inclusive and core inflation measures remained unchanged between August and September. However, the 12-month core rate, which policymakers view as the most important measure, reached 5.1%, its highest reading since March. The lack of progress contributed to the Fed’s decision to continue its aggressive policy and raise its benchmark rate this afternoon.

The probability of a recession increases following every rate increase and every successive month where there is little or no progress in containing inflation. Policymakers rightfully view the long-term threat of inflation on the economy as greater than a modest recession. Chairman Powell clearly stated policymakers’ intention of continuing to raise interest rates until inflation subsides – even if it results in additional adversity.

It will be difficult for inflation to subside if wages continue to increase because employers pass the increase in their costs through to consumers. Unfortunately, there is little evidence that wage increases are slowing enough. Wages and salaries increased by 0.6% in September. Unemployment is near its 40-year low, and job openings continue to exceed available workers.

It will be difficult for inflation to subside if wages continue to increase because employers pass the increase in their costs through to consumers. Unfortunately, there is little evidence that wage increases are slowing enough. Wages and salaries increased by 0.6% in September. Unemployment is near its 40-year low, and job openings exceed available workers.

The US economy is in a precarious position. University of Michigan economist Joanne Hsu expressed concern because “Overall sentiment remains low by historical standards and remains consistent with a recession to come,” Continued weakness in the housing and stock markets may push sentiment lower and drive spending lower. Would that be good news? Perhaps. A drop in consumer spending would relieve the tight job market and lessen inflationary pressures – the hardship that Chairman Powell said was necessary.

Will a tight labor market continue to push incomes higher, making the policymaker’s job to contain inflation more difficult? We will get some inkling of employer sentiment and employment when the Bureau of Labor Statistics releases The Employment Situation – October 2022 on November 4th. Check back to HigherRockEducation.org for our summary and analysis of this important data.