Good News! The overall CPI index fell in April for the first time since August 2021, generating hope that inflation peaked. But many of the underlying inflationary pressures persist. The core index, which excludes food and energy costs, increased in April, indicating that inflation continues to be broad-based and will linger. Inflation continues to bring hardship to many Americans and remains a significant economic concern. Our analysis explaining inflation’s persistence is provided below. 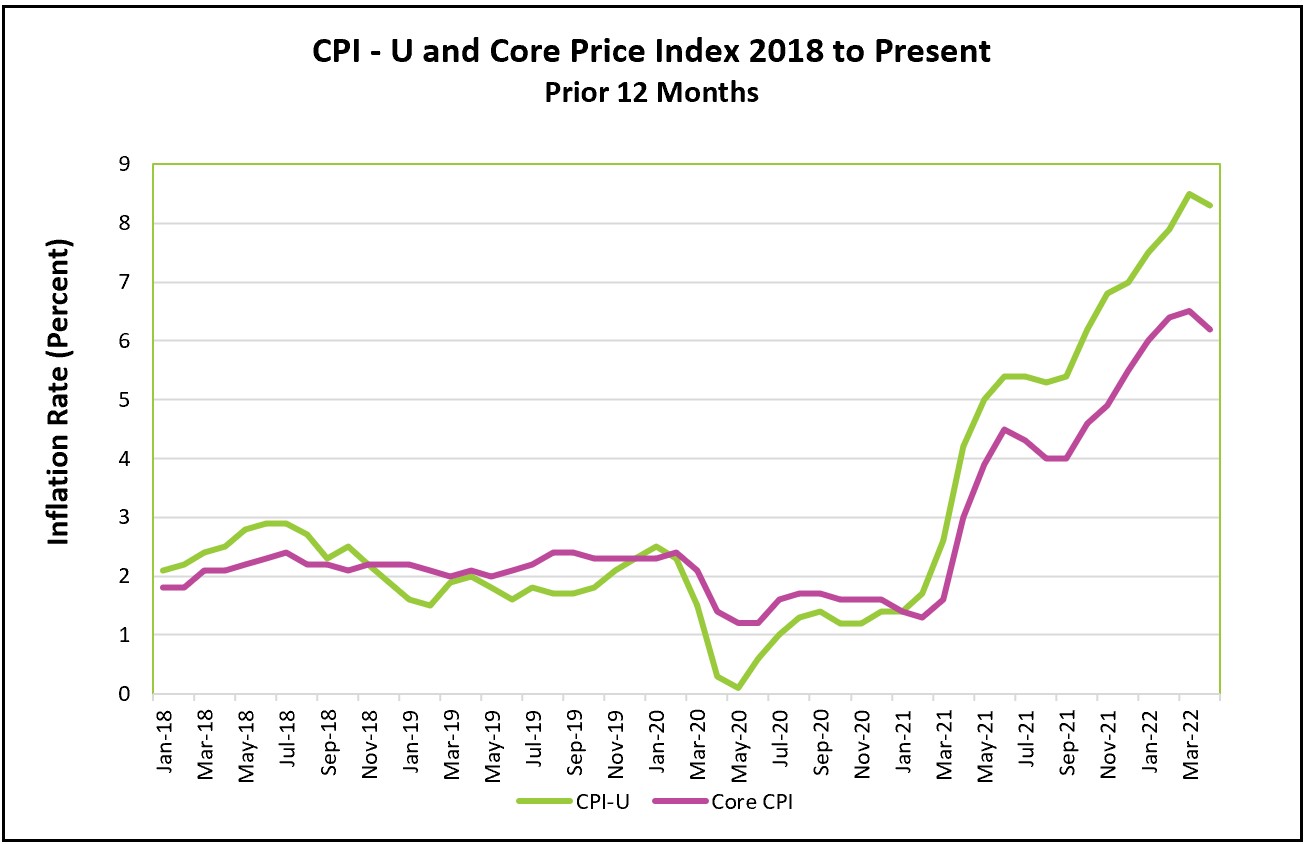 The Bureau of Labor Statistics’ press release highlights is summarized below. You can access the full report at Consumer Price Index – April 2022.

A mathematical anomaly that economists refer to as the base effect partially explains the lower 12-month CPI rate. Inflation began its surge about one year ago when the economy was rebounding from the pandemic. A rise in demand and many supply bottlenecks started to push prices higher. The higher rates increased the base used to calculate future readings. A higher base can reduce the percentage increase when measuring price increases for the prior twelve months, even when the month-to-month figures are increasing.

Falling gasoline prices contributed significantly to the drop in April’s prices. Unfortunately, the deceleration of prices was not widespread. The price of most of the other items included in the index rose or changed slightly in April, increasing the core index to its highest level since June 2021. Most economists consider trends in the core index a more reliable gauge of inflation because it excludes volatile food and energy prices. May’s rebound in gasoline prices supports their view. According to AAA, the national average price per gallon at the pump reached $4.40.

Consumer spending for services has increased as the number of severe COVID cases subsided. Many service companies have raised their prices in response to the increase in demand. In April, prices for services increased 0.7%, the largest monthly gain in more than a decade. However, businesses are also dealing with higher costs caused by supply challenges. The labor market has been very tight, and service providers, such as restaurants have increased wages to attract and retain workers. Airlines could take advantage of the increase in travel demand while passing their higher fuel costs through to their customers by increasing their fares by 18.6% in April. Shelter prices, which comprise approximately one-third of the CPI, remain high and increased 0.5% for the third straight month.

Supply bottlenecks and shortages persist. China’s lockdowns for COVID continue to cause delays in shipping final goods and parts. Ukraine and Russia are significant producers of wheat and fertilizer. Most economists expect the shortages to linger and push food prices higher. Inflation of food prices moderated slightly in April but remained very high. April’s food prices were 10.8% higher than a year ago. The increase was the largest since 1980.

Inflation remains significantly above the Federal Reserve’s 2.0% target. The Federal Reserve recognizes the threat of inflation, but controlling it will be a challenge. A tighter monetary policy is needed to reduce demand and suppress inflation, but not sufficiently to throw the economy into a recession. Chair Powell stated when addressing the American people, “Inflation is much too high, and we understand the hardship it is causing, and we’re moving expeditiously to bring it back down.” (Chair Powell’s Press Conference) The Fed’s policymakers started an aggressive campaign to slow inflation in March when they raised the federal funds rate for the first time since 2018. They again increased their benchmark rate at their last meeting on May 4th, when they raised it by 0.5%, the largest increase since 2000.

In summary, while the overall inflation rate may be peaking, it is still near its forty-year high. April’s figure benefited mainly from a drop in gasoline prices, which have since increased. Inflation is broad-based, evidenced by the core index’s rise, making it unlikely to change the Federal Reserve’s aggressive monetary policy.

We will get our first look at the US economy’s growth in consumer spending and personal income in the second quarter when on May 27th, the BEA releases Personal Income and Outlays, April 2022. The report also furnishes April’s PCE price index, the inflation gauge preferred by Fed policymakers. Check back to HigherRockEducation.org shortly after its release for our summary and analysis.