The consumer price index rose 8.3% over the prior year, more than most economists expected, but down slightly from its pace in July. It also marked the third straight monthly decrease. But the drop in the price level resulted from falling gasoline prices. Disinflation needs to be more widespread and pronounced. This report shows inflation is more entrenched in the economy than a month ago. 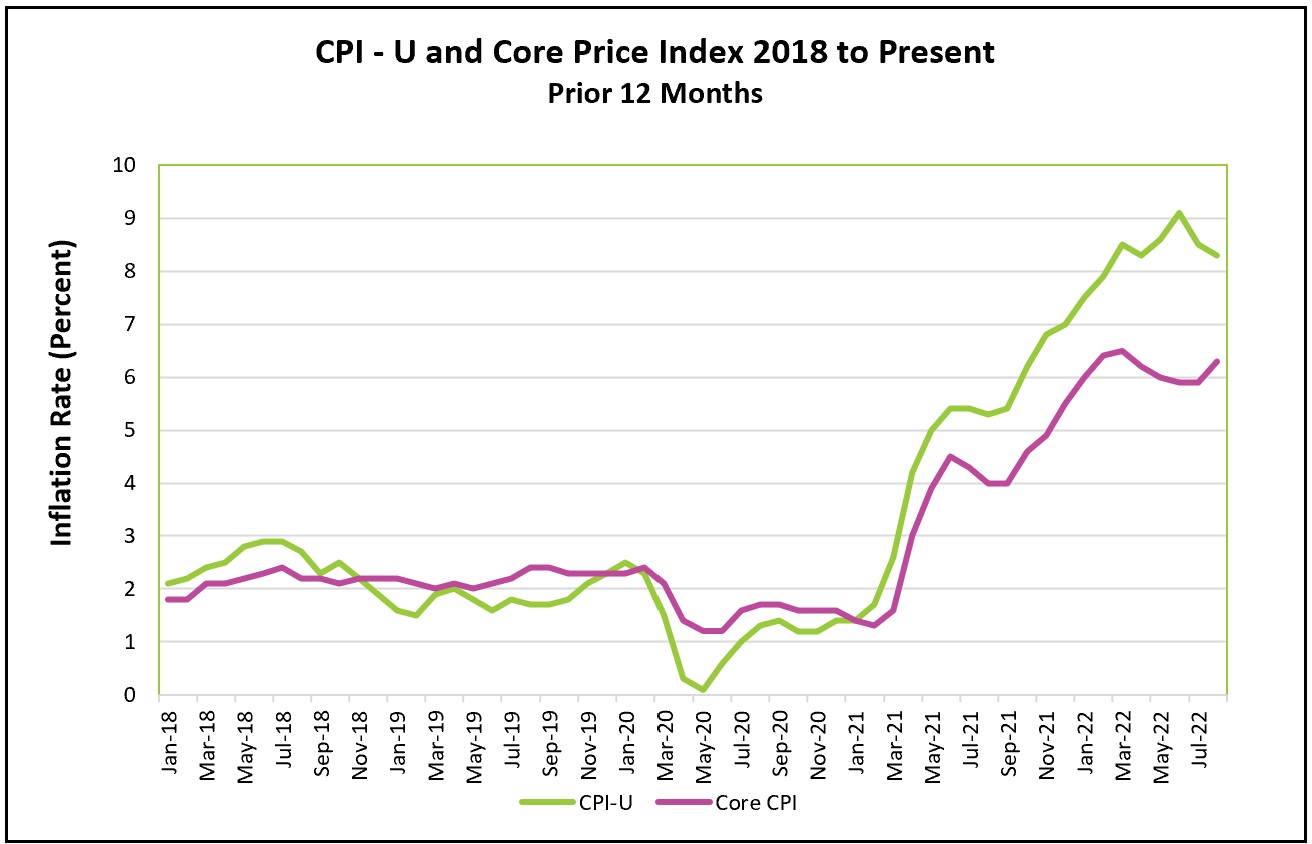 Before the pandemic, inflation was just shy of 2%. Today, it exceeds 8%, well above the Federal Reserve’s target of 2%. The highlights of today’s Bureau of Labor Statistics press release are summarized below. You can access the full report at Consumer Price Index - August 2022.

Gasoline prices fell dramatically, slowing the overall inflation increase. Still, doubling the core rate of inflation, which excludes gasoline and food prices, proves that inflation is rooted in the economy, making it much more difficult for the Federal Reserve to tame it while orchestrating a soft landing. Gasoline prices have fallen 91 straight days, mainly contributing to three successive months of a reduced annual inflation rate. During the same period, the core inflation rate remained unchanged or increased. Price increases have become more widespread and accepted, making it difficult for the Fed to curb inflation without triggering a recession. Chairman Powell has been clear that he will tame inflation, understanding that it will bring hardship to many American families. But he also knows that inflation will hurt even more low-income families by reducing their buying power, making it more difficult for them to absorb the higher cost of rent and food. Earlier this month, the BLS reported wages increased 5.2% over the prior 12 months, 3.1% less than inflation, which means buying power has deteriorated for many American families. In August, families were provided a slight reprieve from falling gasoline prices, but those savings were probably more than eaten up by the rising cost of food, shelter, and medical care.

Food prices continue to outpace inflation, although August’s 0.8% increase was the slowest since December 2021. Food prices are 11.4% higher than a year ago. In addition, electricity costs continued to rise faster than inflation, increasing 1.5% in August and 15.8% over the year.

The Federal Reserve policymakers began increasing its benchmark rate in March 2022. Their objective was to reduce the economy’s aggregate demand by making it more expensive to purchase or invest in goods using credit. Inflation mounted on the supply side. Labor shortages, longer delivery times, and supply bottlenecks made it more difficult for businesses to meet the demand for their good or service. Policymakers thought these problems would right themselves shortly after the pandemic ended. Unfortunately, they underestimated the severity of the supply constraints and consumers’ pent-up demand. They also knew that there is little the Fed can do to rectify inflation caused by supply chain problems.

Initially, inflation was greater in the goods sector because supply shortages prevented companies from meeting a surging demand. For example, in June 2021, used car prices increased by over 10%. Recently they have been falling. Meanwhile, consumers have become more interested in eating out and traveling, pushing up the demand for services. Employers have had difficulty finding workers, prompting them to increase wages and perks. Companies have often raised their prices to cover the added cost. Food away from home increased by 0.9% in August.

The shelter index is the most important service category because it accounts for nearly one-third of inflation. The rent index and the owners’ equivalent rent index rose 0.7% in August. Rents have been increasing at the fastest pace since the mid-1980s. Demographic and economic trends increased the demand for rental housing. Home prices and higher mortgage rates have reduced the number of people who can qualify to purchase a home. Economists believe it is unlikely the demand will soften soon.

Policymakers at the Federal Reserve will meet later this week. This report will not sway them from their aggressive monetary policy to raise its benchmark rate to curb inflation. Policymakers will likely increase the target fed funds rate by 0.75% for the third time. The Chairman has been clear that the central bank will pursue this policy until it sees a softening of prices brought on by a slowing economy. The Fed hopes to avoid a recession, but after this report, that challenge has become more daunting. Consumer spending and personal income trends provide an additional indication of the economy’s strength.

The Bureau of Economic Analysis will examine both in its Personal Income and Outlays, August report. The report also provides the Fed’s preferred measure of inflation, the PCE price index. Check back with HigherRockEducation.org shortly after its release on September 30th.