Prices continued to surge higher in February, and that is before Russia’s invasion of Ukraine pushed oil prices to record highs. Real wages fell as prices rose sharply in food, energy, and shelter, making it more challenging for low-income households to balance their budgets. Economists expect policymakers will try to break the momentum by increasing the fed funds rate when they meet next week. However, they must try to curb inflation while not undermining the recovery. 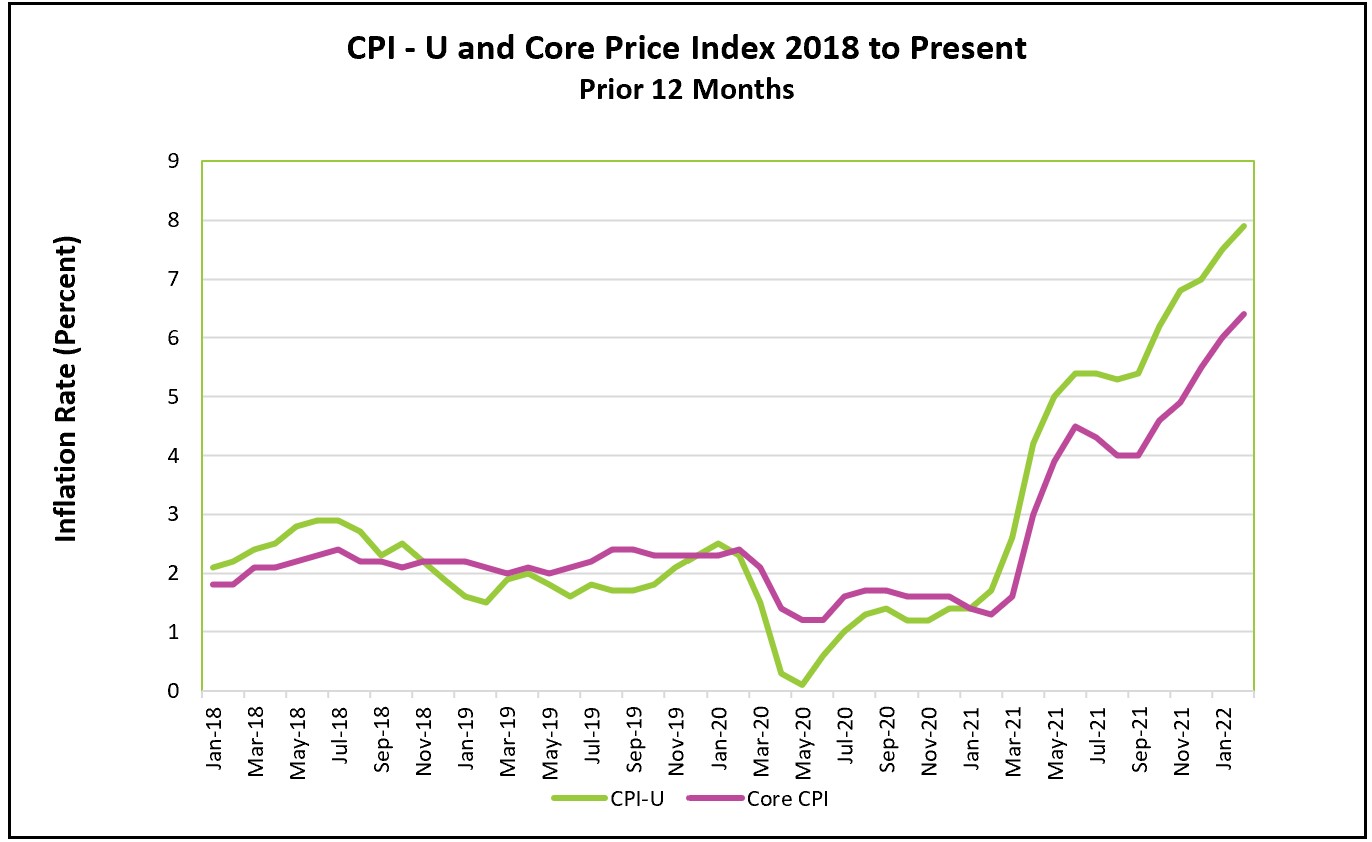 Visit the Bureau of Labor Statistics’ full report at Consumer Price Index – February 2022. The report’s highlights are summarized below.

The Russian invasion of Ukraine has compounded an already challenging inflation problem. Inflation reached a 40-year high in February before Russia invaded Ukraine. Rapid economic growth fueled by a growing aggregate demand has continued to push prices higher. Businesses constrained by supply challenges such as labor shortages, depleting inventories, and distribution delays induced by the pandemic have had trouble keeping pace with the growing demand. Economists believed inflation would peak in February and predicted inflationary pressures would ease when the world economies emerged from the pandemic and central banks raised interest rates. But the Russian invasion changed that, and now most economists predict higher inflation in the upcoming months.

Increases in the prices of necessities such as food, energy, and shelter affect all of us, especially low-income households whose income has grown at a slower pace than inflation. Last week the Bureau of Labor Statistics reported that wages had increased 5.1% over the prior 12 months. Meanwhile, food prices rose 7.9% and energy 25.6%. Rent of the primary residence increased slightly less than wages at 4.7% over the prior 12 months. And these price increases were before Russia invaded Ukraine! Since then, gas at the pump has reached record levels. AAA reported that on March 11, the national average for a gallon of regular gas was $4.331, up almost a dollar in one month.

The supply of oil and natural gas has received much attention because Russia is one of the world’s largest crude oil and natural gas producers. Replacing Russian oil and gas will not be easy. President Biden and other countries are releasing oil from their reserves. But that won’t be enough. During the early phases of the pandemic, the demand for crude oil fell, and its price plummeted to levels where pumping oil in less productive fields became uneconomical. Wells were shut down. Reopening them or new fields takes time.

The war will also increase the price of many other commodities, including wheat and corn. Russia provided half of the US uranium imports. Disruptions in the supply of these commodities have already pushed up world prices. For example, wheat prices have increased approximately 85% after Russia attacked Ukraine. The Wall Street Journal reported that Volkswagen shut down two plants and lay off workers because it could not secure wire systems made in Ukraine. The article also noted that semiconductor companies might have difficulty obtaining neon gas and other materials that Russia and Ukraine provide. 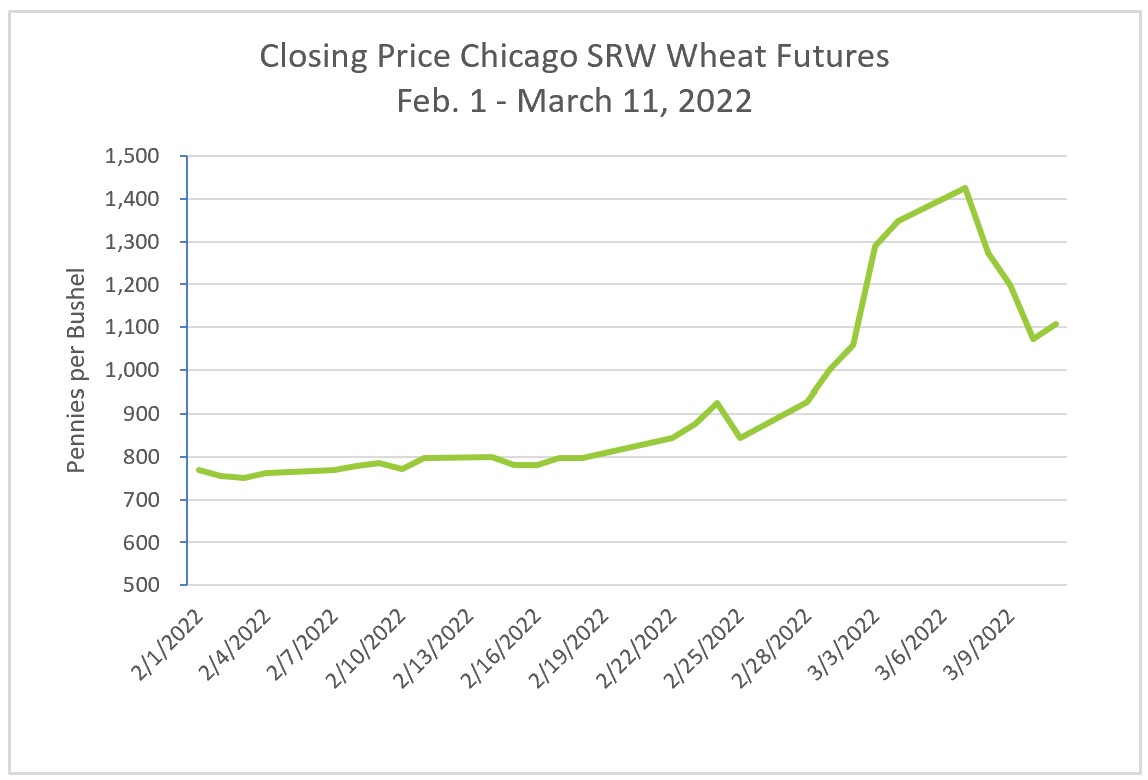 The Russia-Ukraine war has reminded those of us old enough to remember the 1970s when high energy costs during the Arab Oil Embargo brought a period of stagflation, a stagnant economy with very high inflation rates. It took several years for the economy to rebound. Higher energy costs impacted the price of nearly everything. Goods and services became more expensive to produce and distribute, so companies had to pass the higher cost through to consumers. People came to expect and accept the higher prices and negotiated wage increases. Consumers also cut back, and the economy contracted into a recession. This is precisely the scenario the Federal Reserve wants to avoid. Most economists believe that the US economy is too healthy to contract. Households have accumulated savings, consumer spending continues to be robust, the unemployment rate is 3.8%, and the job market remains tight.

What should the Federal Reserve policymakers do at their March 15-16 meeting? There is typically a six-month lag between a rate increase and its impact, so it is crucial policymakers don’t do too little too late or too much too soon. Some economists fearing doing too little too late believe the Federal Reserve should be more aggressive before inflation gets out of hand. The risk is that deteriorating consumer sentiment and lower real wages may discourage consumer spending and slow the economy too much. Those who fear doing too much too soon worry that disruptions caused by the Russian invasion will slow the economy and possibly trigger a recession. This strategy risks continued surges in inflation. The Fed will likely raise the federal funds rate by .25% and closely monitor consumer spending, the tight labor market, and wage gains. It will keep a close eye on how much energy prices affect other items. Energy prices are volatile, but if price increases are widespread, it is indicative of a long-drawn-out problem. If consumer spending continues to strengthen and unemployment decreases, expect the Fed to continue increasing rates sooner. But the Fed will delay further tightening if falling consumer spending and higher unemployment threaten the recovery.

Check back to HigherRockEducation.org shortly after The Bureau of Labor Statistics releases its March CPI report on April 12th for our summary and analysis. It will provide valuable data and insights into how severe the Russian invasion impacts inflation.