June’s inflation report was disheartening. A significant increase in gasoline prices pushed the annual price index up the most in 40 years. The price increase was broad-based. The latest report, announced Thursday morning, brings welcome news. Again, gasoline prices drive the report. However, in July, gas prices fell from over $5.00 a gallon to just over $4.00 and helped reduce July’s overall inflation rate to zero. When measured over the prior 12 months, the Consumer Price Index (CPI) fell from 9.1 percent in June to 8.3 percent in July. However, food and shelter prices continue to surge, suggesting inflation will continue to squeeze American budgets. 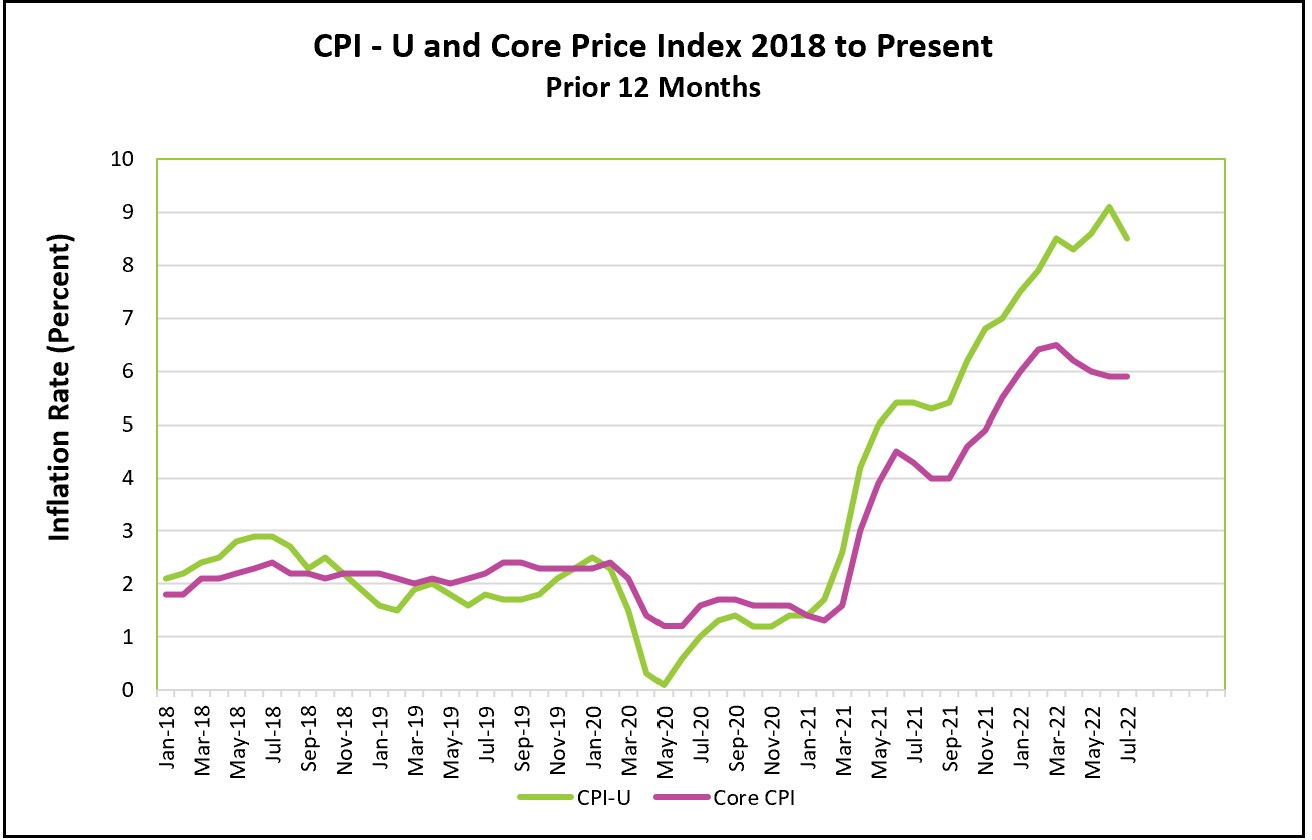 Before the pandemic, inflation was just shy of 2 percent. Today, it exceeds 8 percent, well above the Federal Reserve’s target of 2 percent. The highlights of Thursday’s Bureau of Labor Statistics report are summarized below. You can access the full report at Consumer Price Index - July 2022.

A 7.7 percent fall in gasoline prices prevented July’s overall CPI from increasing. Great news! However, stabilization of more than gas prices is required to reduce inflation over an extended period. Gasoline prices are volatile and could quickly increase again following a geopolitical crisis. Unfortunately, increases in wages, food, and shelter prices need to decelerate to attain an acceptable level of inflation.

Food prices have risen 10.9 percent from last year, the largest increase since May 1979. Poultry and egg prices soared primarily because of an avian flu outbreak. Grain price increases were among the highest. The Ukraine war continues to contribute to higher food prices because Ukrainian harvests of wheat, corn, and sunflower seeds have dwindled. Higher prices for fertilizer, which Ukraine is a large producer of, and gas, which Russia is a major producer, have increased farmers’ costs worldwide.

The Federal Reserve has aggressively moved to slow inflation by increasing its benchmark rate by three-quarters of a percent at its last two meetings. The policymakers’ objective is to reduce the economy’s aggregate demand. Consumer demand for goods has fallen in recent months, putting less pressure on suppliers and supply chain bottlenecks, which is reflected in the core price index’s deceleration from 0.7 percent in June to 0.3 percent in July. Monetary policymakers pay more attention to the core price indexes than to the all-inclusive indexes. Most economists believe a core index provides a better reading on underlying price trends because the core indexes strip out food and energy costs, which are more volatile. While core prices have trended lower since March, they continue to exceed 0.2%, the average monthly increase during the two years before the pandemic, so it is unlikely the change is sufficient to alter the Fed’s plan for additional rate increases.

Policymakers pay particular attention to shelter costs because they contribute approximately one-third to the CPI and even more to the core index. Housing costs tend to fall at a slower pace than other prices, such as food and energy, so increasing rents will prolong high inflation. Rents increased 0.7 percent in July and 6.3 percent over the prior 12 months. Higher mortgage rates and appreciated home values have discouraged many families from buying a home. Ironically, this could increase rental rates by increasing the demand for rental units.

July was the first month that wage gains exceeded inflation this year, but wages over the past year remain significantly less than inflation. Last week the Bureau of Labor Statistics reported that wages increased 0.5 percent in July, up from 0.3 percent. However, when measured over the prior 12 months, wages have increased 3.3 percent less than the general price level. That means consumer purchasing power fell, forcing families to either dip into savings or incur debt to purchase the same number of goods and services as last year. The graphs below by the Federal Reserve Bank of St. Louis show the recent fall in savings since 2021and the increase in consumer debt service since the first quarter of 2021.

The catch-22 is that wage increases need to decelerate to quell inflation, but in doing so, it imposes hardship on wage-earners, particularly low-wage earners who live paycheck to paycheck. Last week the BLS reported that payrolls increased by 588,000, and job openings remained much higher than the number of workers willing to fill them. The high demand for labor has pushed up wages, which pressures employers into increasing their prices. Meanwhile, the money paid to the additional workers has provided households with more money to spend, which increases the economy’s aggregate demand. Both conditions are inflationary and make it less likely that the policymakers at the Federal Reserve will discontinue increasing their benchmark rate to tame inflation.

There are some signs that inflation will subside during the next quarter. The economy contracted in the first two quarters of 2022, raising concerns that the economy is in a recession. Consumer spending rose at a slower rate than at the end of 2021. The softening of demand helped mitigate many of the supply conditions. For example, the California ports are not as crowded as they were at the height of the pandemic. Lower gas prices are reducing transportation costs. Consumers should eventually reap the benefits of these lower costs.

Hopefully, July’s report indicates a trend toward lower prices. Much of that depends on trends in consumer spending and personal income. The Bureau of Economic Analysis will examine each in its Personal Income and Outlays, July report. Check back with HigherRockEducation.org shortly after its release on August 26.