Is a Recession Needed to Slow Inflation?

Inflation accelerated in June, rising to its highest level in 40 years. Necessities such as food, shelter, and gasoline were among the goods and services with the most significant price increases. Inflation’s tenacity increased the likelihood that the Federal Reserve’s policymakers will raise interest rates more than initially planned and jeopardize throwing the economy into a recession when policymakers meet at the end of July. Meanwhile, income increases remained less than the inflation rate, squeezing American budgets. Reducing inflation is the Fed's main priority, even if it means enduring a brief recession. 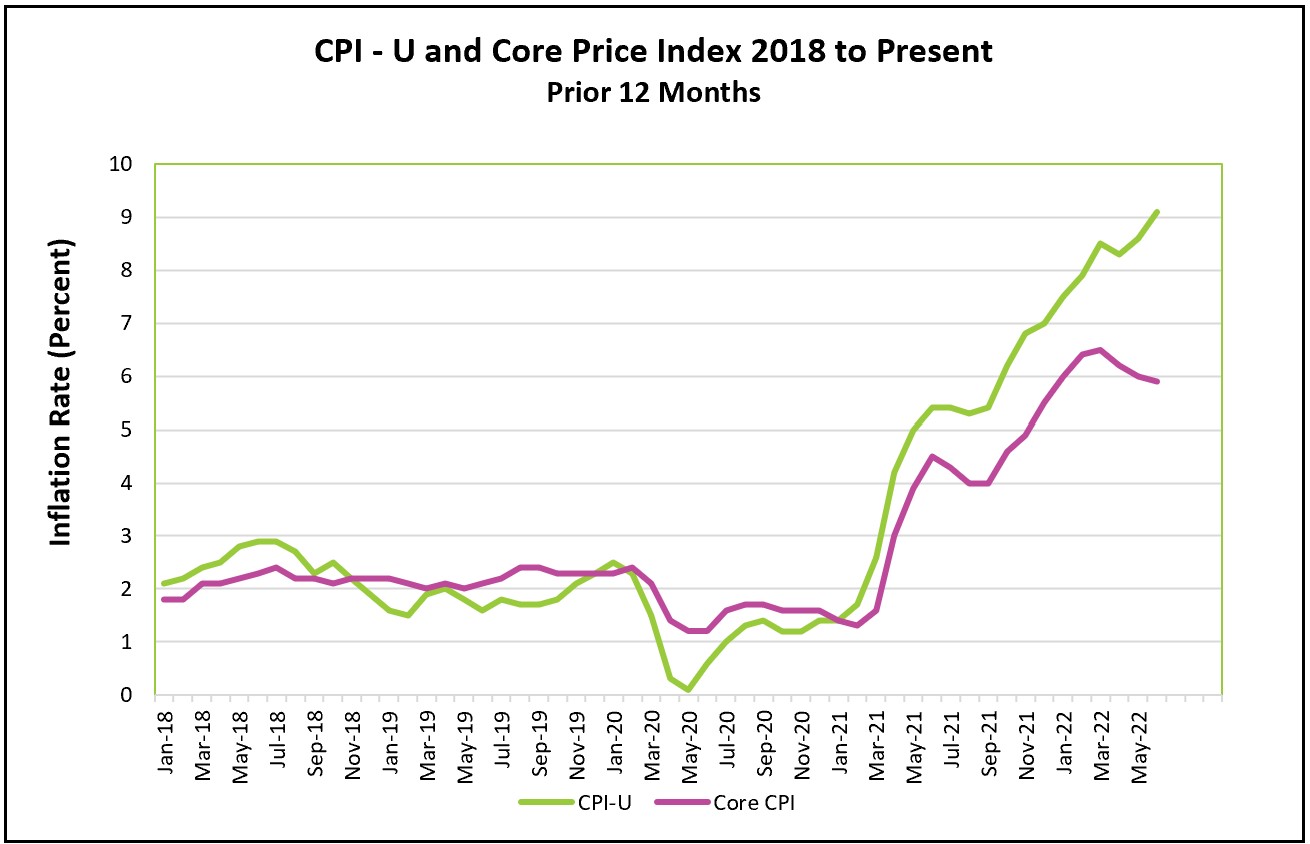 Before the pandemic, inflation was just shy of 2%. Today, it exceeds 9%, well above the Federal Reserve’s target of 2%. The highlights of last Friday’s press release by the Bureau of Labor Statistics are summarized below. You can access the full report at Consumer Price Index – June 2022.

Inflation is broad-based. Airline fares, the price of lodging, and car rental rates were among the few goods and services that fell. Income has not kept pace with inflation, forcing many consumers to make tough choices. Last week, the Bureau of Labor Statistics reported that hourly wages rose 0.3% in June and 5.1% over the prior 12 months. Real wages, which are wages after being adjusted for inflation, have decreased for 15 straight months, and are 3.6% less than a year ago, their lowest level since 2007. Lower-income families suffer the most since a disproportionate share of their income is used to purchase necessities. Food prices have increased at least 0.9% every month since the beginning of the year. Rent of the primary residence has increased 5.6% over the prior 12 months and 0.8% in June, the most since 1986. Shelter prices contribute approximately 40% to the CPI. Significant rental increases could prolong inflation because people typically sign rental agreements for at least a year. Gasoline prices jumped 11.2% in June and are up nearly 60% from a year ago. Fortunately, according to the AAA, the nation’s average price per gallon has fallen from over $5.00 a month ago to $4.60. The price of Brent crude also fell below $100 a barrel for the first time since July 12th, but gas prices are volatile, and events in the Russia-Ukraine war and the expected increase in summer travel could increase the upward pressure on these prices.

The report’s only good news was that the annual core price index has slowly decreased, from 6.5% to 5.9% between June and March. However, it remains much above the Federal Reserve’s 2% target, and its monthly gain increased from 0.6% to 0.7% in June. The monthly increase in the core index has exceeded 0.5% since April.

Policymakers at the Federal Reserve and other central banks will likely continue increasing their interest rates to combat inflation, even if it results in a short recession. The Fed had planned to raise its benchmark rate another 0.75% in July, but many economists believe this report increases the likelihood of increasing rates by 1.0%. Their goal is to reduce the economy’s aggregate demand. However, many problems caused by COVID or the war between Ukraine and Russia are linked to supply. These include labor shortages, difficulty securing parts, and food shortages. Monetary policy has minimal influence on these factors making it more difficult for policymakers at the Federal Reserve. In the 1970s, the supply shock of dramatically higher oil prices helped propel inflation to record levels. Inflation persisted and became expected, making it much more challenging to tame. In the early 80s, Chairman Paul Volker pushed interest rates much higher to quell inflation. The impact on the economy took several years to overcome because a change in people’s expectations about inflation was needed. Today’s policymakers fear prolonged inflation may have a similar effect on expectations. Consumers would become more accepting of price increases, and businesses would be less fearful of a consumer rebellion if they raised their prices. Such a viewpoint would prolong inflation. Policymakers are choosing to aggressively fight inflation even if it results in a short recession because they believe prolonged inflation would be more damaging than a brief recession.

The faster and higher the Fed pushes rates, the more likely its actions will propel the economy into another recession. Economists fear that consumer spending will fall. (Many economists believe RGDP will fall in the second quarter. Real consumer spending fell in May.) Businesses would curtail hiring. A drop in consumer spending should eventually force companies to lower their prices. Is consumer spending rebounding or continuing to lose momentum? If the fall continues to decrease, was it sufficient to reduce RGDP for the second consecutive quarter? These questions will be answered in two BEA releases at the end of the month. The first, Gross Domestic Product, Second Quarter 2022 (Advance Estimate), will be released on July 28th. The second, Personal Income and Outlays, June, will be released on July 29th. Check back to HigherRockEducation.org shortly after its release on June 30th for our summary and analysis.