The Russian invasion of Ukraine aggravated supply chains and pushed already rising prices to levels not seen in 40 years. An increase in COVID cases in China reversed recent improvements in resolving supply bottlenecks. Declining real wages make it more challenging for low-income families to balance their budgets. Because consumers are spending more on gas and food following the price increases, they have cut back on buying many other items. The substitution of gas and food for other goods and services partially explains the recent drop in real spending and the deceleration of increases in the monthly core price index.

Visit the Bureau of Labor Statistics’ full report at Consumer Price Index – March 2022. The report’s highlights are summarized below. 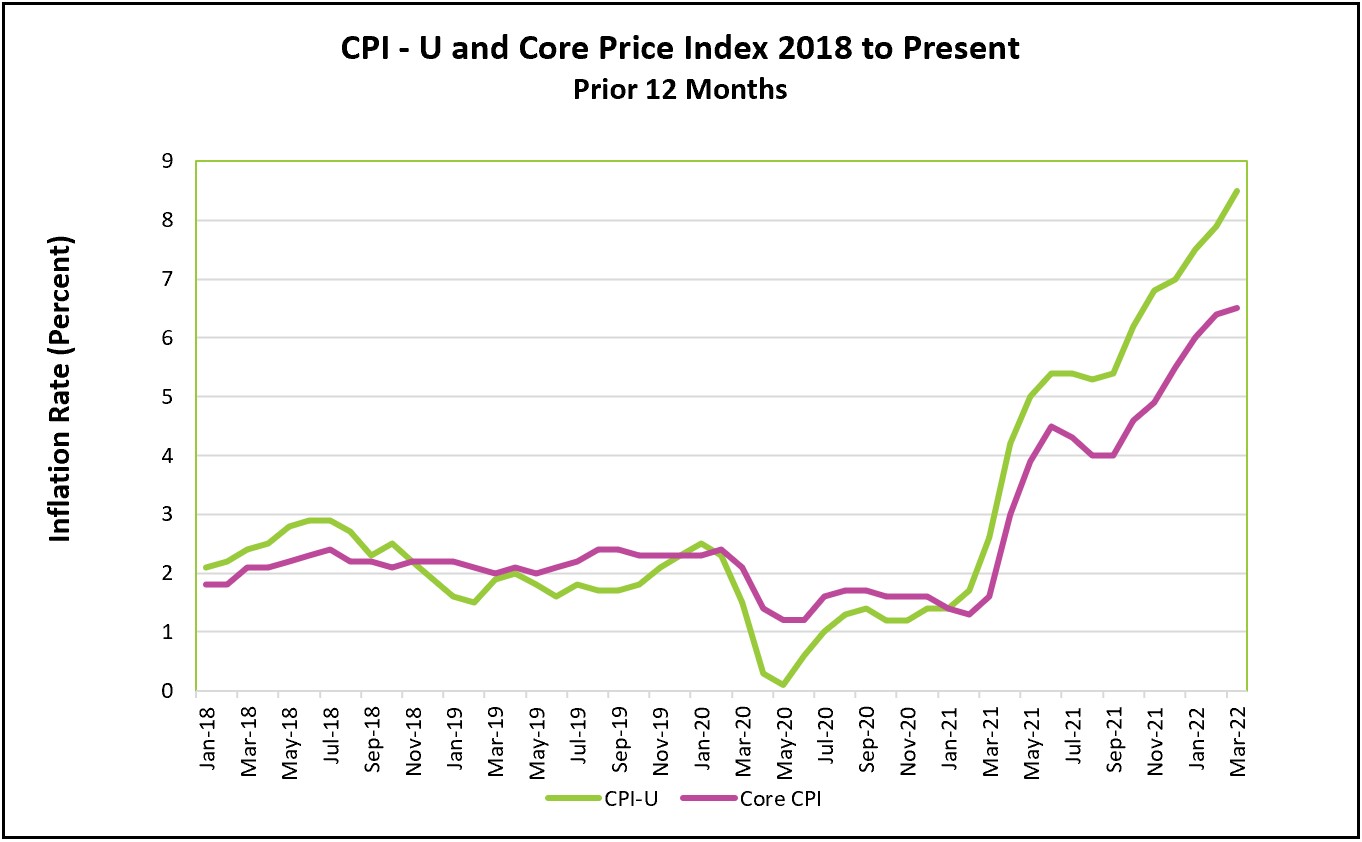 Inflation was gaining momentum before Russia invaded Ukraine. A shortage in supply of inputs, distribution bottlenecks, a tight labor market, and surging consumer demand drove prices upward. Most economists predicted price increases would subside as supply bottlenecks were resolved and people returned to work. They hoped a slight increase in rates would lessen consumer demand enough to allow suppliers to catch up with demand. The Russian invasion dashed those hopes by disrupting shipping routes and the world’s oil and food production. Before the war, Russia was the world’s second largest oil producer. Ukraine and Russia are significant producers of wheat and fertilizer. (Read this Wall Street Journal article to learn more about the war’s impact on trade.)

Higher prices in essentials such as food and gas reduce the demand for many other items because spending on the necessities reduces the money available to purchase nonessentials. The BEA reported that consumer spending rose only 0.2% in February and actually fell 0.4% when adjusted for inflation. The lower demand partially explains the smaller increases in the monthly gains of the core index. However, the price increases remain significantly above the Federal Reserve’s target.

Meanwhile, the demand for workers has increased as businesses try to meet the demand for their goods or services. Many companies have raised wages to attract workers, but not enough to keep up with inflation. Earlier this week, the Bureau of Labor Statistics reported that wages increased 5.6% in March, so, after adjusting for inflation, wages fell 2.5%, the 11th straight month of lower real wages. Lower real wages mean that most families cannot buy as much despite the wage gains because the price increases exceed any income gain.

Policymakers at the Federal Reserve will raise the federal funds rate when they meet in May. The question is whether they will increase it by 0.5% or 1%. Higher rates should lessen aggregate demand by making purchasing items such as cars and homes more expensive. But when higher prices result from higher supplier costs, an economy can be pushed into a period of stagflation, when growth is limited, and prices increase. A growing number of economists are concerned the combination of higher prices, lower real spending, lower real income, and tightening by the Federal Reserve may drive the economy into another recession.

Monthly inflation gains should slow in the upcoming months as the world begins to adjust to the war and more people return to work. For example, gas prices surged to $4.33 per gallon on March 11, shortly after the invasion, but shortly after fell to $4.08 (AAA). World producers cannot replace Russia’s oil immediately, but existing producers will gradually develop new supplies, while businesses and consumers will conserve more. President Biden announced that 1 million barrels of oil will be released daily from the Strategic Reserve for six months beginning in May. But inflation will remain at unacceptable levels in the foreseeable future. The labor market is tight. Workers will continue to demand higher wages, and businesses will continue to pass their higher costs through to their customers by raising prices. Other than inflation, the economy is in a good place. GDP continues to increase. Consumer spending may slow or even fall, but it is currently at acceptable levels. Unemployment is near record lows. Meanwhile, please pray for a settlement of the Russia Ukraine conflict.

Check back to HigherRockEducation.org shortly after The Bureau of Economic Analysis releases the advance estimate of GDP for the first quarter of 2022 on April 28th for our summary and analysis. It will provide valuable data and insights into how GDP during the first quarter was affected by a growth in employment, inflation, and the beginning of the Russia – Ukraine war.