Stubborn Inflation Increases The Likelihood of a Recession

Inflation returns to its unsustainable pace, increasing the likelihood of a recession. After falling in April, inflation returned to a 40-year high in May, dashing any hopes that inflation had peaked. Many underlying inflationary pressures persist, which increases the likelihood that the Federal Reserve will become more aggressive in its monetary policy. They aim to dampen inflation by slowing the economy without triggering a recession. But if inflationary pressures continue, it may take a recession to bring prices under control. 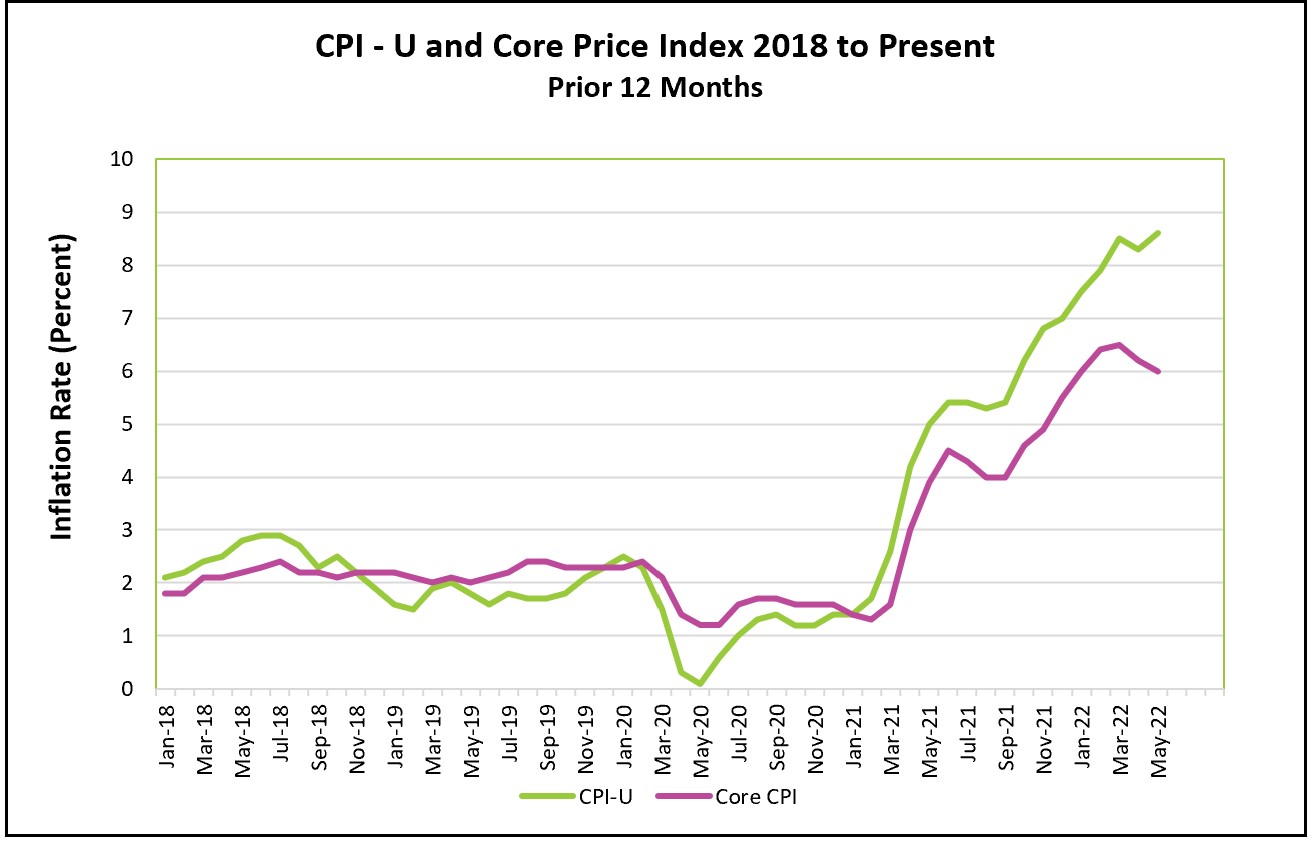 Before the pandemic, inflation was just shy of 2%. Today, it exceeds 8%, well above the Federal Reserve’s target of 2%. The highlights of last Friday’s press release by the Bureau of Labor Statistics are summarized below. You can access the full report at Consumer Price Index – May 2022.

Last week, the Bureau of Labor Statistics reported that hourly wages rose 0.3% in May and 5.2% over the prior 12 months. But household income gains have not kept pace with inflation. The BEA reported that total income rose 0.4% in April, but after adjusting for taxes, and inflation, households were no better off than in March. April was only the second time since July 2021 that real disposable income increased or remained unchanged. It is unlikely that May’s real disposable income was positive, given the small increase in wages and the high inflation rate.

Inflation hits lower-income families hardest when the price increases for necessities are among the highest. Grocery prices increased at the fastest clip since 1979, and rent as a primary residence the most since 1987. Gas prices rebounded after a drop in April. They are nearly 49% higher than a year ago. According to AAA, a gallon of gasoline costs just under $5.00. Unfortunately, the Russia-Ukraine war and the expected increase in summer travel will likely increase the upward pressure on these prices.

Inflation began to gain momentum in the second quarter of 2021 as low interest rates and trillions of dollars of government stimulus helped the economy recover from the COVID-induced recession. Supply bottlenecks caused by temporary plant closings, labor shortages, and delivery challenges contributed to many goods and services shortages. Meanwhile, a pent-up demand was released, elevating the demand for goods and services. The imbalance between supply and demand pushed prices higher. Initially, an inadequate supply of those goods and services that were most impacted by supply constraints had hefty price increases. At that time, policymakers believed the price increases would be minimal and quickly subside to an acceptable level because people would quickly return to work, factories would reopen, and the demand for goods would return to normal. They were wrong. Enduring inflationary pressures include:

Demand continues to exceed supply: Consumer spending has surpassed inflation every month in 2022 and shows little sign of slowing down soon. But the make-up of the aggregate demand is changing. People are substituting experiences for goods. Growing inventories at many department stores should lessen pressure on the price of those goods. But airfares, the price for lodging, and dining out were among the services with the largest price increases.

Labor shortages continue: More job openings exist than there are available workers. The dynamics of the labor shortage have caused an inflationary spiral. Companies have raised wages to entice workers, but then they have raised their prices to cover their added expenses.

Supply chain pressures remain: Some supply issues such as shipping have improved. In September 2021, as many as 90 cargo ships were backlogged in California harbors. Today, that is down to a manageable number. However, China’s zero tolerance for COVID continues to stifle supply.

Russia’s invasion of Ukraine: Oil prices have increased to record levels. The disruption of grain and fertilizer exports from Ukraine has escalated food prices. According to the USDA, food prices are expected to continue climbing.

The persistent geopolitical problems have put the Fed’s policymakers in a difficult position. They aim to reduce inflation by increasing its benchmark interest rate and lessening aggregate demand. Inflation will continue at an unacceptable level if they do not raise rates sufficiently because consumers will continue their spending spree, and supply and demand will remain unbalanced. But if they raise interest rates too high; it could stifle demand and production too much, jeopardize the recovery, and increase the likelihood of a recession.

Consumer spending drives the US economy. The American consumer has continued to spend, despite falling real incomes. Growth in the economy’s aggregate demand has contributed to inflation. Are consumers slowing spending? The BEA’s release Personal Income and Outlays, May, will provide insights into the direction of consumer spending and income. It also will provide May’s PCE price index, the inflation measure favored by the Fed policymakers. Check back to HigherRockEducation.org shortly after its release on June 30th for our summary and analysis.