Wednesday, May 24, 2017
Be prepared to wait and open your wallet if you need an electrician or plumber. The demand for these skills is growing, while the supply is falling. Several members of my church are electricians. All but one is over 60, and the one is over 50. I mentioned this to one of the electricians and was told, "Young people just are not going into the trades." This blog explores the current skilled-trade market and provides projections that may help young people interested in pursuing a career in construction. My neighbor, Chuck Fletcher, owns Quality Electric in Durham, NC. I would like to thank him for sharing some of his insights:


Electricians are getting older.

Many of Quality Electric's employees are in their late 50s, and Mr. Fletcher frets about attracting younger workers to replace his older electricians. This is true nationally. The graph below shows that the median age of electricians is higher than other professions. This conclusion is also supported by Joshua Wright in an article that he wrote for Forbes. 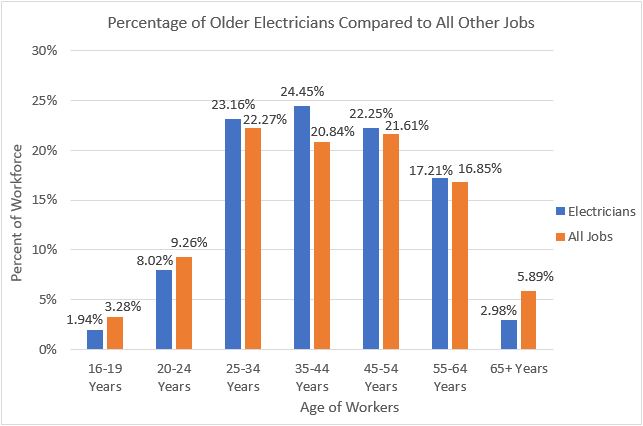 
The lack of skilled trades is deterring growth in the construction industry.

Mr. Fletcher told me, "I could double the size of Quality Electric if I could hire more qualified electricians." Many projects are taking longer to finish because subcontractors do not have the skilled workers to complete a job on time. Ron Brown, the executive vice president of the State Utilities Workers in Monroe, North Carolina is quoted, "you can put in all the money in the world, but if there aren't enough people out there to build it, it can't get built". (Kevin G. Hall the Los Angeles Times, September 2, 2016.)

According to the Bureau of Labor Statistics, the median annual compensation for electricians was $52,720 in 2016. The most qualified earn much more. Not bad for someone without a college degree. Mr. Fletcher told me he would hire 3 or 4 workers tomorrow if they were qualified, but most young people are not qualified, or they are unwilling to work. What is the reason for the gap and why young people are not attracted to the trades? Several reasons are cited. First, the starting wage for "helpers", is between $10 and $12 per hour. It takes several years for them to reach the median income. Several years ago, high schools offered training in the trades which provided a jump start for new workers. In the 1990s the educational push was for college prep. Many school districts dropped training in the trades because these courses were more expensive to offer. This issue is addressed in a report by the Career Education Colleges and Universities that encourages schools to train more people in the trades.

The Great Recession hit construction harder than most other industries. Many people lost their jobs, and found employment doing something else. They have been slow to return to the trades, where their jobs are more sensitive to economic downturns. Some foreign-born workers have left the country and have not returned due to the harsher treatment of illegal workers.

The construction industry is dependent on foreign-born workers.

The National Association of Homebuilders reported that 22% of workers in the industry are immigrants. Even more foreign workers could be hired, but restrictive immigration laws dissuade many contractors from hiring immigrants because of the harsh penalties for hiring an illegal immigrant and the fear of employees being deported after time and energy has been spent training them. In its plea for immigration reform the National Association of Homebuilders, states "The current legal visa system lacks a program to allow construction workers into the country on a temporary basis, and many cite this dearth in the current legal system as contributing factor to the underground labor economy." The underground labor economy has contributed to keeping labor costs lower than they would be otherwise. Illegal workers are willing to work for less, which enables businesses that hire these illegal workers to be more aggressive when bidding for a job. Meanwhile, to remain competitive, employers without illegal workers resist raising the compensation of some of their employees. Hardest hit are those young employees just entering the field.

The outlook for electricians is promising.

Employment of electricians is projected to grow 14 percent from 2014 to 2024, much faster than the average for all occupations. ... With greater efficiency and reliability of newer manufacturing plants, demand for electricians in manufacturing should increase as more electricians are needed to install and maintain systems. Bureau of Labor Statistics

The laws of supply and demand paint a bright picture for high school students who choose the trades. President Trump wants to invest in America's infrastructure, which will increase the demand for highly skilled workers. (See Defining Our Infrastructure Challenge.) Meanwhile the supply should continue to be restrained by the aging and retiring work-force. Stricter immigration laws will deter many foreign-born workers from entering the country. The market place will make the appropriate adjustment. When there is a shortage, prices are bid higher whether it is for workers or apples. A growing demand, combined with a decreasing supply will result in higher wages for workers in the skilled trades. (Read our free lesson Supply and Demand – Producers and Consumers Reach Agreement to learn more.) I have focused on electricians, but the same is true of other skilled trades. Below are links to BLS pages for different professions and a summary of all professions.


A great resource for anyone considering the economic implications of entering a profession is the Bureau of Labor Statistics National Occupational Employment and Wage Estimates United States. Please share this blog with any young people who have expressed interest in the construction industry.