The US Debt will reach 20 trillion dollars soon!

The United States is close to being $20 trillion in debt! That's right, sometime in the next few weeks the US national debt will hit $20 trillion. The Durst and National Debt clocks have been used to estimate the national debt. They differ slightly.


How much is 20 trillion dollars?

A stack of 20 trillion one dollar bills would reach a height of just over 1,357,000 miles. (A dollar bill is .0043 inches thick.) An astronaut could travel to the moon and back twice, and then return to the moon before traveling 1,357,000 miles. (The moon is 238,900 miles from the earth.) Another way to grasp the enormity of our debt is if the United States payed $1 billion toward the balance (not interest) every day, it would take nearly 55 years to pay off the national debt.


What is the Impact of the US Debt?

The enormity of the number leads some to conclude that the United States is in danger of going bankrupt. Others are concerned that the debt continues to grow. Most economists believe the real danger is reaching the point where the mounting debt, measured as a percentage of the gross domestic product, is unsustainable.

Bankruptcy is an accounting term that means a person's or company's liabilities exceed their assets. An asset is something that has value. Normally it has monetary value. These include cash, stock, real estate, and a good or service that is in inventory or in the process of being produced. Liabilities include obligations to others. They include loans and contractual obligations such as wages owed to employees and vendors. Some of a country's assets include its land, buildings, and investments. Imagine the value of all the coal, oil, natural gas, and timber assets on land owned by the federal government. Now add gold, copper, and other valuable minerals to be mined. Another asset is its working population. While the population is not owned by the government, the government does "own" the right to tax its citizens. That relationship is an asset, just as a contract to manufacture a good or service is an asset for a company. The value of the US energy deposits alone exceeds the national debt by approximately 400 percent. See the Institute for Energy Report to read about the US government's assets.

Economists and financial analysts pay closer attention to the ability of a borrower to repay its bills. This is an area of greater concern. When a family applies for a loan, the bank considers the family's income, the family's assets, and its credit worthiness. No one would argue that a multi-millionaire with an income of $500,000 is better equipped to pay a $500,000 loan than a recent college graduate with college debts just beginning her first job earning $30,000 annually. A family's ability to service (pay) a debt improves as its income increases. Many families are economically hurt when they borrow beyond their capacity. In other words, their income increases slower than their ability to service the debt. The same is true with countries. Larger countries with a greater income are better able to pay borrowers than smaller countries. Countries should be able to pay an increasing debt load as long as the country's economy and income grows along with the increase in debt.

GDP measures a country's income, so economists analyze the relationship between a country's public debt and GDP as a way to measure whether a country is or will be able to pay its bills. The graph provides several countries' public debt as a percentage of its gross domestic product for 2008 and 2012. Follow the link at the bottom of the graph to view the ratio in other years or for another country. 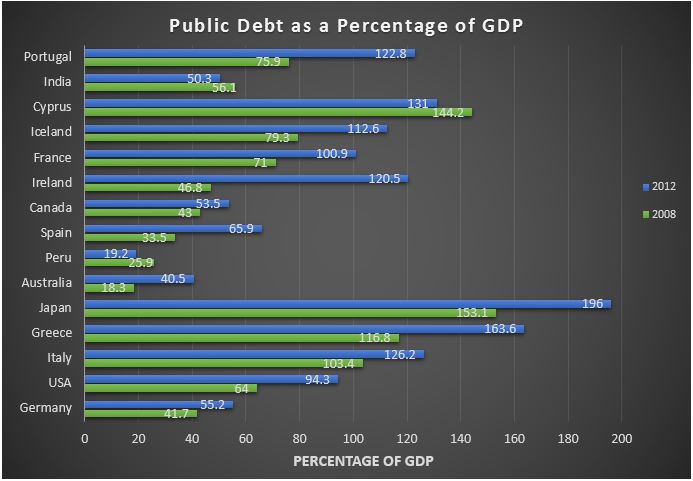 Higher Rock Education will continue to monitor the relationship between the national debt and GDP monthly in our blogs summarizing the condition of the US economy.

Please share this blog with any economics teachers or students that may want to remain current on economic issues.