Consumer spending fell in December for the first time since February. The Bureau of Economic Analysis (BEA) report follows Thursday’s release that RGDP, the most quoted measure of economic growth, increased at a record clip in the fourth quarter, making it apparent that growth slowed at the end of the quarter since consumer spending accounts for nearly 70% of the economy. Many economists attribute the reduced spending to the rise in Omicron cases. While there is no doubt that the increase did deter some spending, the Omicron increase fails to explain why spending on services increased slightly. Most of the drop in consumer spending was for durable goods such as cars and electronics. Seasonal factors also contributed to December’s fall. The rise of Omicron and possible shipping delays prompted many to do their holiday shopping sooner rather than waiting until December. (Consumer spending rose 1.5% in October and 0.4% in November.) Supply bottlenecks continued to impact sales. 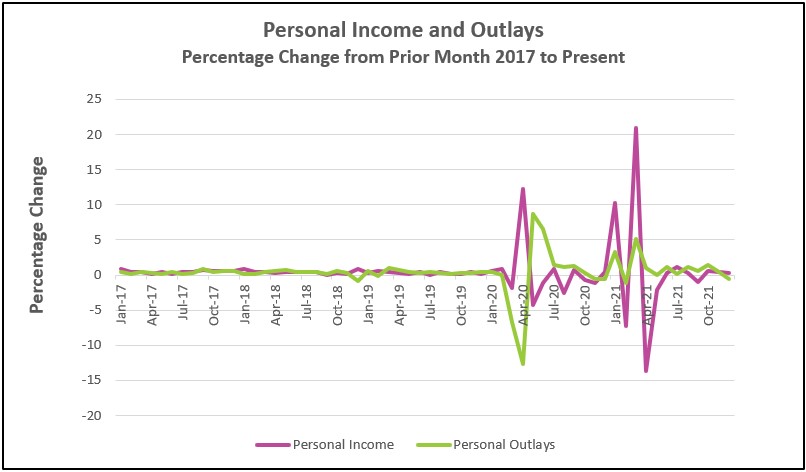 Personal income rose in December. Wages and salaries continue to climb at the fastest clip in decades. In another report, the Bureau of Labor Statistics reported that wages and salaries rose 4.5% in 2021, up from 2.6% in 2020. But the increases are less than inflation, which means real disposable income continues to fall. Consumers may have purchased less because prices increased more than wages, thereby reducing a household’s buying power.

Read the BEA's full report Personal Income and Outlays – December 2021. The highlights are listed below.

The Bureau of Labor Statistics' report Employment Summary for January will provide valuable insights into the impact of the Omicron variant on employment and wages. Check back to HigherRockEducation.org shortly after it is released (February 4) for our summary and analysis.