When I taught economics I looked for current, or historical moments to illustrate fundamental economic principles.

The stock markets were fascinating to watch Tuesday night as soon as it became apparent that Donald Trump had won the US presidential election. Last week pollsters and investors expected Hillary Clinton would win the election. Shortly after the precincts began reporting the results, it became apparent that the victory was in question. As the night progressed, the uncertainty increased. Stock index futures, which foretell the future direction of a market, plummeted over 800 points by 5:00 AM CMT Wednesday morning. By the close on Wednesday, the market had actually recovered all of its loss and posted a gain of over 200 points! Some stocks posted large gains. What explains this movement? Which stocks performed well? What industries can benefit from a Trump presidency? Basic supply and demand analysis can be used to explain the price movements and predict where the markets are headed. (Read our free lesson Supply and Demand – Understanding The Dynamics Of The Stock Market.)

Late Tuesday most of the downward movement was spawned by overseas trading. Investors hate uncertainty. Why? Because uncertainty increases risk, and investors require a larger expected return when taking on more risk. But investors are also opportunists. In our lesson we emphasize that stock prices are driven by expectations of future profits. Investors asked, "What industries and companies will be more profitable following the inauguration of Donald Trump, a Republican controlled House of Representatives, and a Republican controlled Senate?" The demand for those stocks in those industries increased substantially yesterday. They include: infrastructure, financial stocks, defense stocks, coal mining companies, and many more. One area President Trump will probably focus on is building the infrastructure. During the campaign, he repeatedly said he wants to rebuild the inner cities. He pointed out that our current infrastructure lags far behind other developed nations. He has proposed massive increases in infrastructure spending. Companies like Caterpillar (CAT), and US Steel (X) were among the largest percentage gainers Wednesday because they would benefit from improving our infrastructure.

The supply and demand graph below illustrates how an increase in a stock's demand (XYZ), caused by an expected increase in future profits, pushes stock prices and the volume traded higher. (Prices increase from P1 to P2 and volume increases from V1 to V2.) This is exactly what happened following the shocking election of Donald Trump to be the next President of the United States. 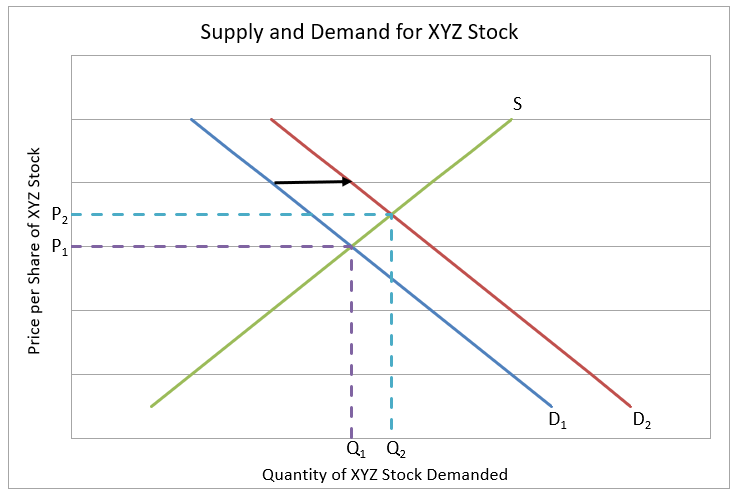 Higher Rock Education and Learning is not recommending the stocks mentioned in this blog. These examples were chosen to illustrate how a historical event that causes a change in expected future earnings impacts a company's stock price. Investors should consult an advisor to discuss whether or not investing in a stock meets the investor's risk tolerance and investment objectives.

Investors are also asking "Which industries and companies would be hurt by a Trump presidency?" Stay tuned. We will address that subject in a blog early next week.