US Economy Contracts Two Consecutive Quarters – Are We In A Recession? Probably Not.

So, are we in a recession? Usually, two consecutive quarters of contractions signal a recession. However, technically, the start and end dates of expansions and recessions are determined by the National Bureau of Economic Research, which defines a recession as a period with “a significant decline in economic activity that is spread across the economy and lasts more than a few months.” A tight labor market and a low unemployment rate are unusual during recessions. Over the past three months, employers added more than 1.1 million people to their payrolls. The unemployment rate fell to 3.6%, only 0.1% above the pre-pandemic level. The number of job vacancies exceeds the number of willing workers by nearly two to one. Furthermore, wages continue to climb, although not as fast as inflation. Such numbers are typical during expansions.

The Bureau of Economic Analysis’s news release and report can be accessed at Gross Domestic Product, Second Quarter 2022 (Advance Estimate). Here are the report’s highlights.

Was the slowdown intended? Chairman Powell made it clear that the Federal Open Market Committee (FOMC), the board that sets monetary policy at the Federal Reserve, wants economic growth to slow. Their objective is to reduce inflation by slowing the growth of the economy’s aggregate demand, enabling supply shortages to catch up and bringing supply and demand into balance. To accomplish its objective, the FOMC increased its benchmark rate by 0.75% twice in the first quarter. Furthermore, the committee suggested that more rate increases are forthcoming if inflation does not improve significantly. Higher borrowing costs should continue to slow consumer spending and gross private domestic investment. Listen to Chairman Powell’s press conference immediately following the FOMC’s July meeting.

Gross domestic product is the sum of personal consumption expenditures (consumer spending), private domestic business investment, government consumption and investments, and net exports. The table below summarizes the contribution to the quarterly change in RGDP. 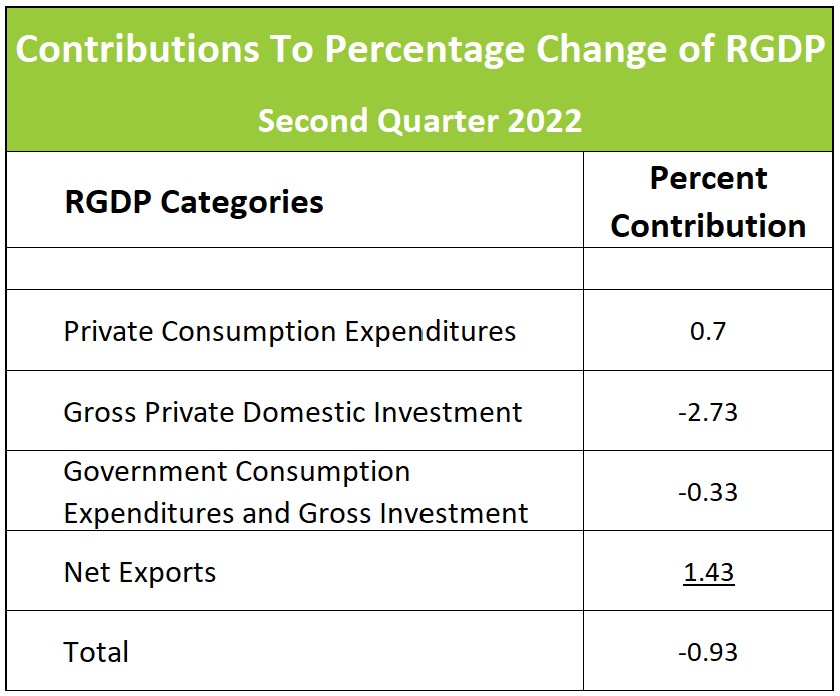 Inflation threatens continued growth in consumer spending. Real disposable income decreased for the fifth consecutive quarter, eroding people’s spending power. In separate reports, the Bureau of Labor Statistics reported that the consumer price index rose at an annual rate of 9.1% in June, while average hourly earnings only increased 5.1% and marked the thirteenth straight month that wage increases were less than inflation.

Gross Private Domestic Investment: During the pandemic, the demand for goods increased, buoyed by added income and a reluctance to leave home. Supply constraints also prevented sellers from meeting consumer demand. As supply issues improved, sellers increased their inventories in anticipation of a continued surge in demand. However, by the beginning of 2022, the demand for goods shrank as inflation cut into disposable income. Consumers shifted their spending away from goods to services, leaving sellers with overstocked shelves. Businesses are not restocking as rapidly as in the first quarter because they fear an economic slowdown. Lower inventories reduced RGDP by 2.0%.

Mortgage rates have climbed to over 5.5% and slowed the housing market. Residential sales peaked at $731 billion in the first quarter of 2021. Since then, higher rates and rapidly appreciating home prices have reduced sales to $673 billion. Last quarter sales plunged at an annual rate of 14% and reduced RGDP by 0.71%.

Government: Government consumption expenditures and gross investment fell at the federal, state, and local levels. Only defense spending increased, but the increase was offset by a much greater increase in nondefense spending. The sale of crude oil from the Strategic Petroleum Reserves reduced government expenditures. However, the sale did not directly impact RGDP because it was to private companies and increased their inventories. Government spending decreased by 1.9%, reducing RGDB by 0.33%.

Net Exports: The trade deficit narrowed for the first time since the second quarter of 2020. Exports increased 18% in the second quarter after falling 4.8% in the prior quarter. Services, led by travel, gained 24.2%. A very strong dollar reduced the cost of travel abroad. The US dollar strengthened because the greenback’s safety has attracted many investors. A stronger dollar normally reduces exports while making imports less expensive. This quarter may have been different because the US is replacing much of the supplies disrupted by China’s intolerance for COVID and by the war between Ukraine and Russia. Grain shipments increased. In addition, continuing problems in manufacturing and transporting motor vehicles restrained imports.

Inflation is slowing the economy – especially because income growth has not kept pace with inflation. Some of the largest price increases have been for necessities such as food, shelter, and gasoline. Rising prices and less real disposable income have forced families to make difficult decisions on which goods or services to cut. Spending cuts could continue to mount as families deplete their savings.

An imbalance between aggregate demand and aggregate supply has caused inflation. Both an increasing demand and a reduction in supply are inflationary. Increasing the aggregate supply would diminish inflation while allowing the economy to grow. But unfortunately, the Federal Reserve’s tools are more effective in impacting demand than supply. (For a more detailed discussion, visit our recent blog Inflation.) Federal Reserve Chairman Powell acknowledged that the FOMC’s strategy of reducing demand to curb inflation is likely to include hardship and a softening of the labor market.

The Federal Reserve policymakers are correct in focusing on inflation. Long-term inflation expectations influence a business’s considerations in raising prices and workers’ negotiations in wages. When these parties think inflation will rise, they are more apt to raise prices or wages. When ingrained in an economy, expectations create an inflationary-driven spiral which would likely throw the economy into a deeper recession. Heightened expectations also make controlling inflation much more difficult.

Are we in a recession? Probably not. But we will be If current trends of slowing spending, falling inventories, and less business investment continue. Sadly, the current situation does not alter the hardship inflation imposes on many consumers.

The BEA will release Personal Inflows and Outflows, June 2022 on July 29th. It will provide valuable insights into the strength of consumer spending, whether income gains continue to be less than inflation, and the impact of the war on prices and trade. Check back to HigherRockEducation.org shortly after its release for our summary and analysis.