During the first quarter of 2019, the United States economy grew 3.2%, which is remarkable given the economy is nearly a decade into its most recent expansion. Employment is strong and workers continue to be added to payrolls. Inflation has been so tame that the Federal Reserve chose to discontinue its policy of tightening. Yet, as always, there are a few concerns. Review my summary of these important government reports and read my analysis at the end of this blog.

On April 26th, the Commerce Department estimated the US economy grew 3.2% in the first quarter of 2019. The BEA will revise this figure when it publishes its revision on May 30th. The highlights are below, or readers can access the report at Bureau of Economic Analysis (BEA).

Personal consumption expenditures (PCE), more commonly referred to as consumer spending, comprises approximately 66% of economic activity in the United States. (Read our lesson Gross Domestic Product - Measuring an Economy's Performance to learn more about the importance of PCE.) Over an extended period, consumer spending is directly tied to household income. Watching the economy's trends in income and expenses provides an important measure of the economy’s health. The Commerce Department released Personal Income and Outlays, March 2019 yesterday. Here are the highlights. 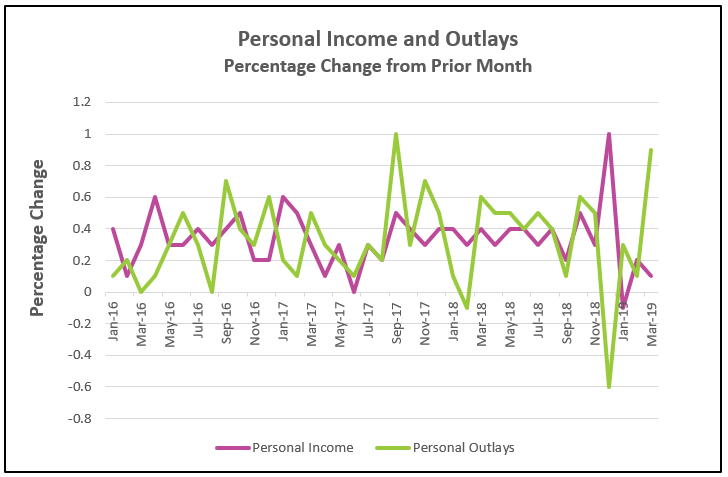 The consumer price index climbed 0.4% in March, the most since January 2018. Don't be alarmed because all indications are that inflation remains relatively tame. Over the prior 12 months the CPI has increased 1.9%. The Bureau of Labor Statistics published Consumer Price Index - March 2019 on April 10th. The data are consistent with another measure of inflation, the PCE price index, which was released yesterday and discussed in the preceding paragraph. Here are the highlights of the BLS report. 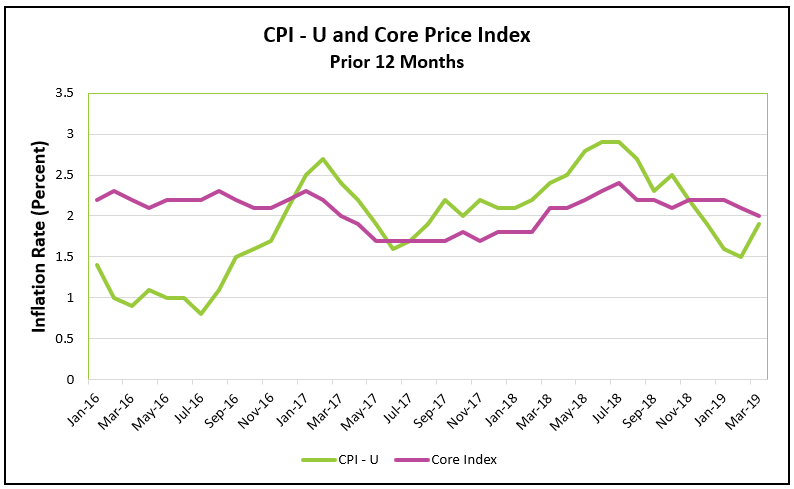 The employment report remained very encouraging. The number of workers added to payrolls jumped from 33,000 in February to 196,000 in March. This compares to an average monthly increase of 223,000 workers in 2018. Most of the other vital figures remained little changed in March. Read the report by visiting The Employment Situation – March 2019. Here are the highlights. 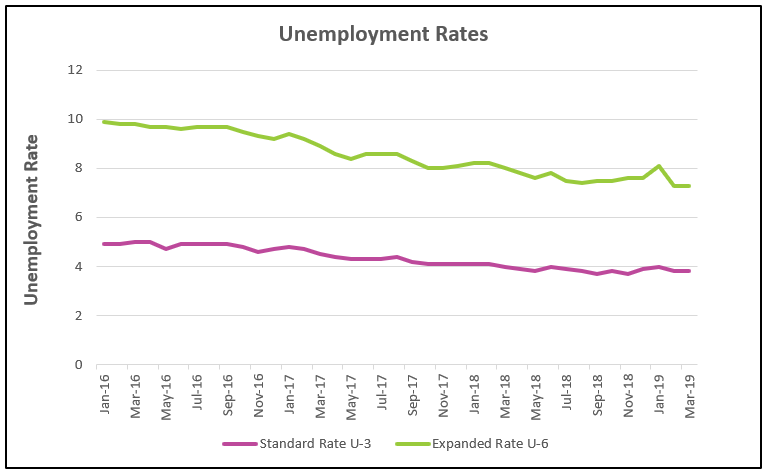 Today and Wednesday, April 30th and May 1st, the Federal Reserve Open Market Committee will meet to discuss monetary policy. This will be their first meeting since Chairman Powell announced the Committee would discontinue their schedule of increasing the federal funds rate and to allow the economic data to dictate future policy. The economy grew 3.2% in the first quarter. Consumer spending increased 1.9% in March. Are these figures enough justify altering the Fed’s policy? Absolutely not…While these increases have been greater than expected, the numbers require closer scrutiny before reaching that conclusion.

Consumer spending drives the economy and jumped at an annual rate of 1.9% in March. However, the quarterly figure was less favorable. Consumer spending increased at an annual rate of 1.2% during the first quarter, the smallest increase since a year ago. The larger than expected March increase was partially due to a pent-up demand during the beginning of the quarter. Perhaps consumers and businesses were more cautious in their spending during the partial government shutdown in late 2018 and early 2019.

So, if consumer spending was not as robust in the first quarter as initially thought, then how did the economy manage to grow 3.2% in the first quarter? There were abnormally favorable trends in inventories and exports that exaggerated the health of the economy in March. Inventories were the greatest since 2015. Large inventories can deter future growth if they are not combined with an increase in consumer spending because inventories increase when companies fail to sell as much as they expect. Fortunately, retail sales improved since the first two months of the year. In March retail sales rose to their highest level since September 2017. The private inventory adjustment added 0.65% to the increase in RGDP. A smaller than normal trade deficit also contributed to the higher than expected growth. If inventories and the trade deficits return to normal levels, it could slow growth in RGDP in the second quarter.

Inflation remains well within the FOMC’s goals. The prior 12-month core PCE price index (the measure favored by the FOMC) was lower at the end of March when it equaled 1.6%, than it was in November 2018 when it equaled 1.8%. But, expect the overall inflation rate to increase in the next few months. Energy and food prices have begun to gain momentum. Energy prices fell for much of the last quarter and early 2019 – but they began to increase sharply in February. Likewise, food prices have climbed at a faster clip than the overall inflation rate since November 2018. These increases explain why the core indexes, which exclude food and energy prices, has increased more than the standard inflation rates. These increases will impact the demand for other products because consumers will be spending a larger portion of their incomes on food and energy.

Trade needs to improve. The US economy is tied to world economies and at some point the US economy would be adversely impacted if the major world economies continue to struggle, even if the current trade disputes are resolved. Improvements in the European and Chinese economies would increase the demand for US goods. Hopefully the new measures taken by the European Central Bank will help. It announced a new stimulus package in early March because the European economies have an anemic growth. It plans to hold interest rates at subzero and provide low long-term rates to several banks. Recently the European Central Bank lowered its expected growth rate from 1.7% to 1.1% according to The Wall Street Journal article, ECB to Launch New Stimulus in Major Policy Reversal. (Published March 8, 2019) China’s growth has also slowed.

Many of the economic gauges were disappointing in the first quarter, but normally the first quarter figures are weaker, and the economy showed signs of improvement in March. The large gains in spending should fuel improved sentiment and continued buying. For the economy to remain strong, monthly gains in consumer spending need to equal or exceed 0.4%, as it did in most of 2017 and 2018. Eventually trade disputes will be resolved. International economies will prosper, which should be an added stimulus to the US economy.