The economic reports for August are in, and there were no big surprises. A growing economy, low unemployment, and an increase in income are reflected in an improvement in consumer sentiment. It is not surprising that consumer spending increased. The trend is encouraging, and should remain so in the months to come. However, expect some bumps in our next report. Hurricanes Harvey and Irma are not reflected in these figures. Higher gasoline prices will increase inflation. Spending is expected to be lower, and people will work less. The Bureau of Economic Analysis reports are for the second quarter and July, while the employment report is for August.

Economic growth hit President Trump’s target of 3.0% in the second quarter of 2017, according to the second revised figure released by the BEA on August 30th. This figure was revised upwards from 2.6%. Consumer spending was the largest contributor to the improvement. It was 0.5% more than initially estimated and grew at 3.3% in the second quarter.

Most economists do not believe 3.0% growth is sustainable, if for no other reason than we have had a very long expansion. The economy has entered its ninth straight year of growth according to the National Bureau of Economic Research. Our current expansion started in June 2009. Only the expansions between 1961 and 1969 and 1991 and 2001 have been longer. Growth exceeded 3.0% several times during Mr. Obama’s presidency, but failed to sustain the momentum. The last time the growth rate exceeded 3% was in the first quarter of 2015, when the economy grew at 3.2%.

Corporate profits were also encouraging. The profits from current production increased $26.8 billion in the second quarter, which follows a $46.2 billion decrease in the first quarter.

The BEA’s Personal Income and Outlays report provides encouraging news related to wages and salaries. Personal income increased 0.4% in July, following a flat month in June. Furthermore, wages and salaries jumped 0.5%. Economists have expected an increase in wages for many months as the labor market has tightened. It is not surprising that consumer sentiment continues to gain strength. According to the University of Michigan Surveys of Consumers, “The Sentiment Index has been higher during the first eight months of 2017 than in any year since 2000, which was the peak year of the longest expansion in U.S. history.” Optimism has helped lift consumer spending 0.3%.

The Personal Consumption Expenditures (PCE) price indexes for July are also included in this report. The PCE is favored by the Federal Reserve making it the more important index when evaluating monetary policy. However, most contracts that are tied to inflation use the consumer price index. Unlike the consumer price index, the PCE accounts for changes in spending behavior as the price of a good increases or decreases. For example, the weight given to chicken would increase if consumers substitute chicken for beef following an increase in the price of beef. The consumer price index assumes the items in the basket are unchanged. The core index, which excludes food and energy, remains below the Federal Reserve’s target of 2.0%. When inflation is too low it may be a sign that the economy is not as healthy as some of the growth figures indicate. Normally a growing economy adds pressure to wages, which in turn increases inflation. The Federal Open Market Committee would like to see a continued increase in wages. The low inflation rate creates uncertainty which may delay the FOMC’s decision to raise the federal funds rate until later this year. 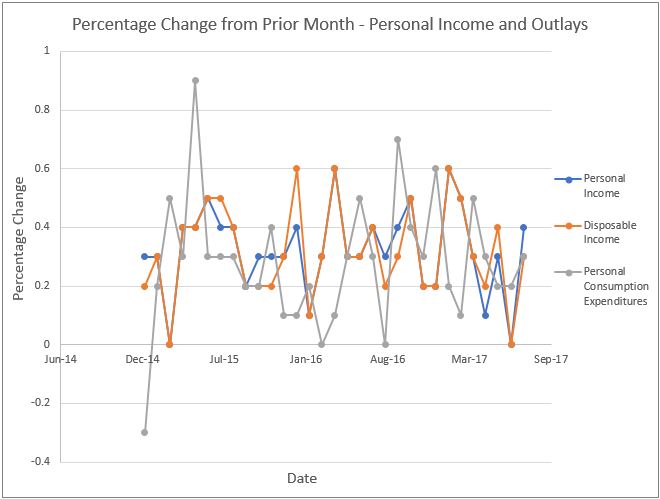 The consumer price index is the most widely used measure of inflation. On September 14th, the Bureau of Labor Statistics reported that the CPI index increased 0.4% in August, and 1.9% over the past 12 months. Most of the increase is due to rising gas prices, which were up 6.3% from last month. Following several months of increases, prices for meat, poultry, fish, and eggs decreased 0.2 percent in August. The volatility of energy and food prices is the main reason economists view the core index as a more reliable measure of inflation. The core index rose 0.2 percent in August and has increased 1.7 percent over the past 12 months. To learn more about inflation we encourage you to visit our free lessons Inflation and Causes of Inflation. 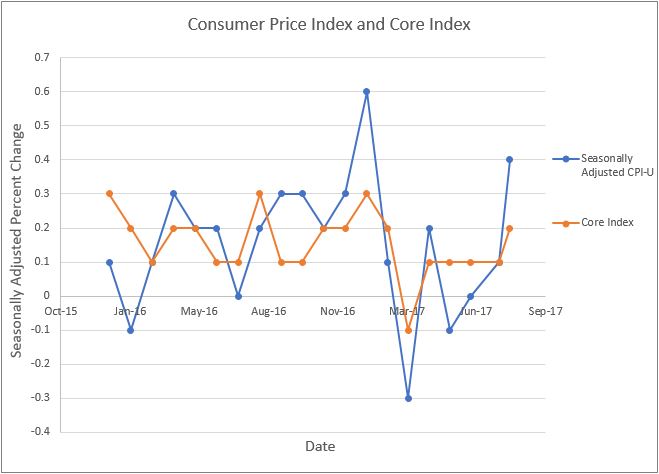 The Bureau of Labor Statistics reported earlier this month that the 156,000 jobs were added to the economy and the unemployment rate increased from 4.3% to 4.4% in August. Manufacturing showed encouraging gains while the services, particularly restaurants and retail, were weak.

An individual must be actively seeking and unable to find work to be considered unemployed. The most widely quoted unemployment rate is the U3 rate, which excludes discouraged workers. For example, someone who lost a job five weeks ago and wants to work, but has decided to wait for the economy to improve would not be included in the U3 rate. Many economists believe the U6 unemployment rate provides a more accurate measure of unemployment. U6 includes discouraged workers. People who want to work, but who have not actively sought employment in the past four weeks are not included in U3, but are included in U6. The U6 rate also considers workers who are employed part-time but want to work full-time as unemployed. The U6 rate is presently at 8.6% down from its peak of 17.1% in November 2009. We have added the U6 rate to our unemployment graph. The participation rate remained unchanged at 62.9%. The participation rate is the percentage of the total population age 16 or older who are either employed or seeking employment.

Since January employment has been relatively stable. The average hourly wage increased 3 cents in August to $26.39 per hour. This is down from a 9 cent raise in July. Over the past 12 months wages have increased 2.5%. 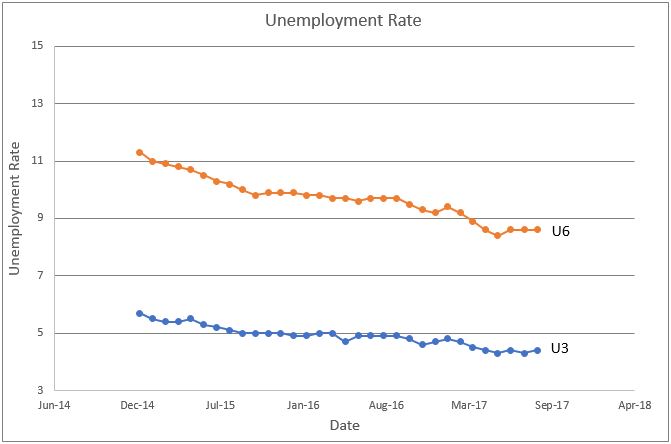 The US national debt now exceeds the nation’s gross domestic product by 3.1 percent. This is down slightly from the first quarter. What does this mean? The best measurement for a debt’s affordability, whether it is a family purchasing a new home or a country, is the relationship between debt and income. The US national debt now exceeds its income and the trend is becoming more alarming. Hopefully Congress will consider this trend when constructing its budget next month for the new fiscal year.