In 2018, economic growth surged in the US, unemployment fell to near record lows, without a significant jump in inflation. I confess to being surprised that inflation wasn't higher. Normally when growth stretches beyond its full employment output the economy becomes overheated and inflation follows. (Most economists believe the full employment rate is between 4 and 5 percent.) Figures highlighted in each report and a graph are furnished. My analysis and summary are provided at the end of the blog.

The Bureau of Economic Analysis (BEA) released its “third estimate” for the third quarter of 2018 on December 21st. (Gross Domestic Product, Third Quarter Estimate) Few adjustments were made from last month’s second estimate. Here are the highlights:

In October and November consumer spending increased substantially, but the growth in personal income did not keep pace. Here are the figures that highlight the BEA’s Personal Income and Outlays, November 2018 report published on December 21st. 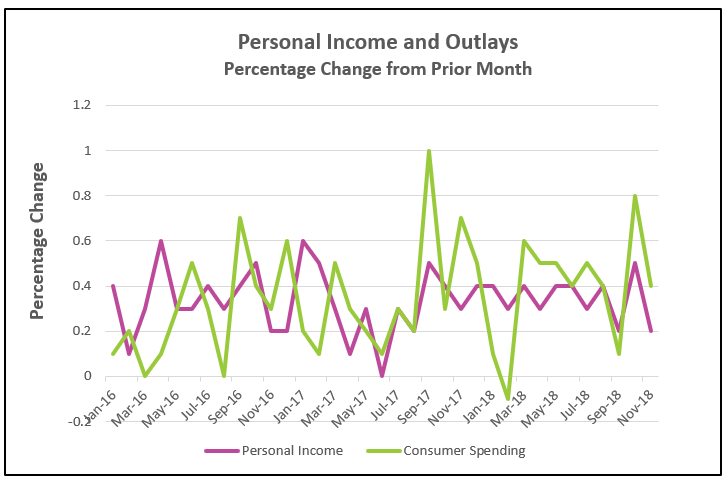 The price index was lower in December, largely because of falling energy prices. The Bureau of Labor Statistics published Consumer Price Index – December 2018 on January 11th. Here are the highlights: 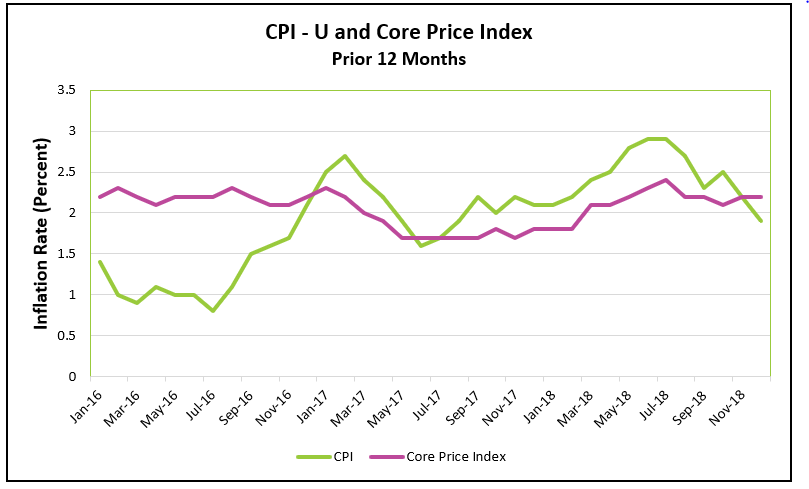 On January 4th the BLS published its December employment report. The full report can be read by going to The Employment Situation – December 2018. Here are the highlights: 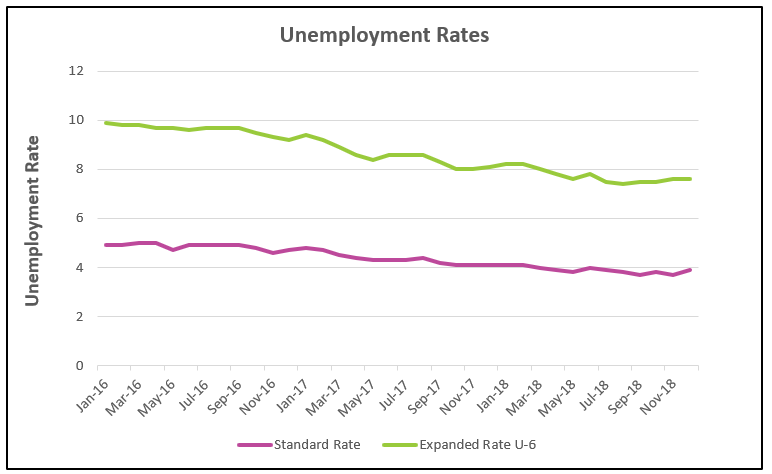 The Bureau of Labor Statistic’s most recent employment report was outstanding, even though unemployment increased from 3.7% to 3.9%. 312,000 workers were added to non-farm payrolls in December. Many formerly discouraged and long-term unemployed returned to work. There were 99,000 fewer discouraged workers at the end of 2018 than at the end of 2017. The labor participation rate increased 0.4% during 2018. It ended the year at 63.1%. Shortages of labor has induced employers to increase wages. Real wages increased 1.1% in 2018, which means most households are seeing an improvement in their buying power.

Gas prices were 7.5% lower in December, which contributed greatly to the 0.1% drop in December’s consumer price index. More people working, higher wages, and lower gasoline prices result in more money in people’s pockets. It is not surprising that PCE increased in recent months (0.8% in October and 0.4% in November). Continued strength in consumer spending is essential to maintaining economic growth because it accounts for approximately two-thirds of economic activity, and other areas of the economy have shown some weakness. Exports fell 4.9% in the third quarter. Tariffs combined with weaker global economies have reduced the demand for exports. Federal government spending increased 3.5% in the third quarter, but a prolonged government shutdown would affect government expenditures and consumer spending. Many government employees and government subcontractors will need to find ways to spend less, at least until the shutdown is over. At that time their spending will resume, but some expenditures, such as going out for a meal or movie, will never be made.

Last month the FOMC raised the target federal funds rate to between 2.25% and 2.5%. This was the fourth increase in 2018. The consensus is there will only be two increases in 2019. Next month the BEA will publish its advance estimate of growth in the fourth quarter. I am confident it will confirm that growth exceeded President Trump’s goal of 3% in 2018. I share most economists’ views that next year the economy will set a record for the longest recorded expansion, but the pace of growth will slow. How long will this expansion last? After all, economies are cyclical, and a downturn is coming. While the US economy remains healthy, there are a few signs that we are nearing this recovery’s end. A prolonged government shutdown and continuing trade disputes will impact the first quarter of 2019. Housing was down 3.6% in the third quarter and could be hampered in the future by higher interest rates. Finally, the US economy remains tied to world economies and at some point, if the major world economies continue to struggle, the US economy would be impacted, even if trade disputes are resolved.