The US economy is booming. Omicron will slow it down in the first quarter of 2022, but not as much as the Delta variant in the third quarter of 2021. American consumers continue to spend as more return to work. Businesses are investing too. Companies have increased wages to attract and retain workers. Despite the higher labor costs, companies are earning higher profits because they can raise their prices. But the economy is in a tenuous position. Four million fewer people are working than before the pandemic. Inflation has reached a point not seen in 39 years. Wage increases have not kept pace with inflation. Policymakers at the Federal Reserve meet next week. What will they do? Read our predictions and recommendations in the summary section. But first, it is important to understand the current state of the US economy. It should be noted that the data in the cited reports were collected before the emergence of Omicron.

The US economy grew 2.3%, according to the final estimate released by the Bureau of Economic Analysis. The figure has been adjusted twice since its advance estimate of 2.0%, with higher adjustments to consumer spending contributing most of the gain. Readers can access the full report at Gross Domestic Product, Third Estimate Third Quarter 2021. The BEA will release its advance estimate for the fourth quarter on January 27th, 2022. Economists expect a significant increase. 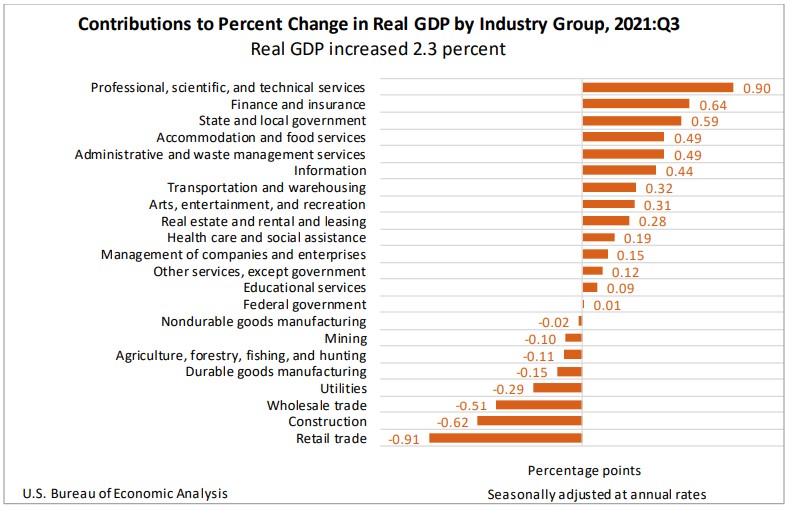 Consumers dipped into savings to support growth in spending during November. However, the spending increase was significantly less in October and was flat after adjusting for inflation. Most of the spending increase was for essentials such as rent, utilities, gasoline, and food. Many economists attribute the drop in spending to supply chain concerns. Shoppers did their Holiday shopping earlier than usual, which would account for the sharp rise in October and the slight increase in November. Price increases were widespread and have gained the attention of policymakers at the Federal Reserve as increases exceed the Fed’s 2% target. Read the full report Personal Income and Outlays – November 2021. The highlights are listed below. 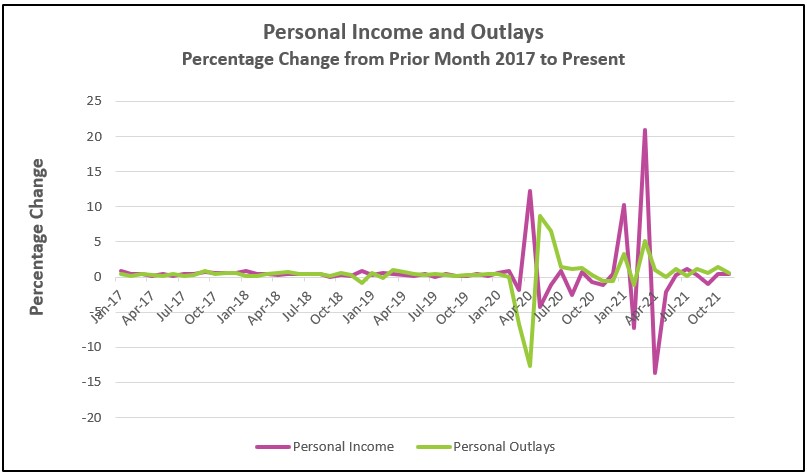 In December, inflation slowed slightly, but the drop was insufficient to reduce the annual inflation rate, which jumped to seven percent, the highest level in nearly 40 years. A fall in gasoline prices contributed to December’s lower rate. Price increases in shelter and used vehicles were the most significant contributors to December’s increase. Economists are concerned that large increases in the shelter index indicate longer-lasting inflation. The shelter index fell slightly in December, but monthly gains have been equal to or exceeded 0.4% every month except August in 2021. Shelter prices are one-third of the CPI and tend to be more enduring. The Bureau of Labor Statistics’ full report at Consumer Price Index – December 2021. The report’s highlights are summarized below. 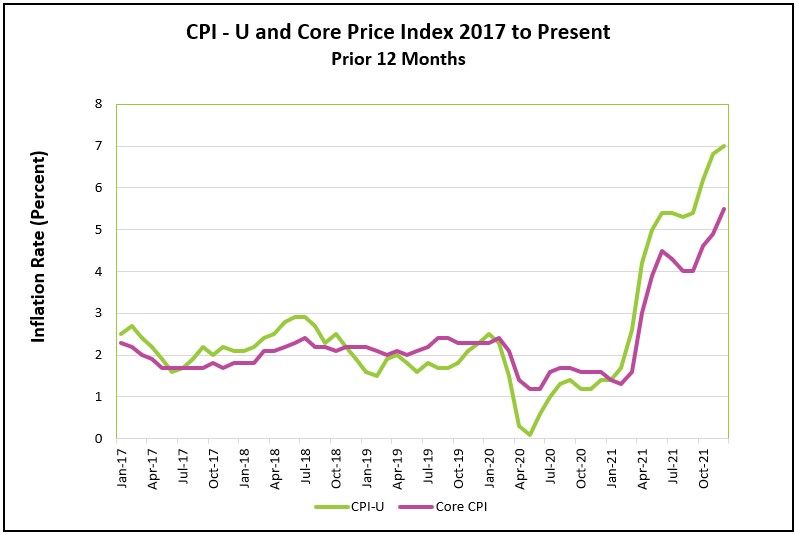 2021 proved to be one of the best years for labor, albeit it followed a dismal 2020. The unemployment rate fell to nearly a pre-pandemic level. Companies added almost 6 million people to payrolls and increased wages an average of 4.7 percent.

In December, the labor market continued to tighten. Employers reported that it was challenging to attract and retain employees as the number of job openings were at record levels, and workers are also quit their jobs at record levels. Workers demanded higher wages and greater flexibility, and employers frequently complied. Employment gains were most notable in leisure and hospitality (53,000), professional and business services (43,000), manufacturing (26,000), and construction (22,000). It should be noted that the employment report used data from the middle of December, before the onslaught of the omicron variant of COVID. The highlights from The Employment Situation – December 2021 are listed below.

We underestimated the strength of the US economy when we made our predictions for 2021. (See the table below.) Growth exceeded our expectations, which meant that the unemployment rate ended up lower than we anticipated. We did not expect the supply constraints to be as significant as they proved to be. Nor did we expect an increase in consumer demand for durable goods as large. These factors led to an inflation rate significantly higher than we predicted. The table also includes Higher Rock’s projections for 2022. Hopefully, they also prove to be too pessimistic. 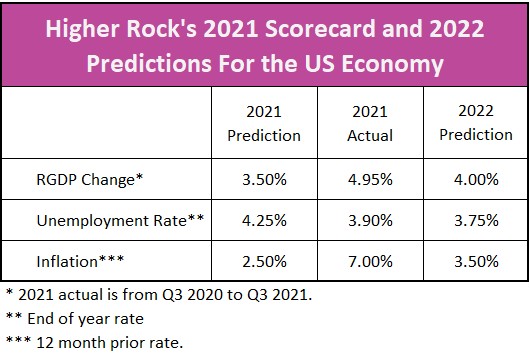 The US economy thrived in 2021, growing at a rate not attained since 1984. The number of jobs increased 4.5%, the most since 1978. Companies are now producing more goods and services than in 2020, but with four million fewer workers. But 2021 was anything but stable. Growth surged early in the year, but then the spread of the Delta variant slowed growth, only to regain momentum at the end of the year. Omicron will slow growth in the first quarter of 2022. But economists expect the slowdown will be less severe. Travel, leisure, and hospitality industries will suffer, as will restaurants and bars. Many schools will return to remote learning, burdening many working parents to find childcare. Some parents will quit until in school learning avails itself. But in each case, the numbers and reaction will be less severe than caused by the initial outbreak and the Delta variant because more people are vaccinated, and we have learned how to manage the risks.

Higher Rock predicts RGDP will grow 4.00% in 2022. The US will continue to grow, but at a slower clip than in 2021. The US government spent trillions of dollars directly to households and businesses to help them endure COVID’s hardships and provide the money to continue the same level of consumer spending. The Federal Reserve pumped enormous sums of money into the economy to maintain liquidity and low interest rates. In 2022, these supports will fade as many programs expire, and the Federal Reserve increases interest rates to cope with inflation. The economy will become less dependent on fiscal stimuli and more on the private sector. In other words, the economy will depend more on the aggregate decisions made by households and businesses. The first half of the year will be stronger because it will benefit from recovery from the Omicron variant with the release of pent-up demand and businesses rebuilding their inventory. Supply challenges will continue to restrain production in many durable goods, including cars and trucks, but not as much as in 2021. Over the prior 12 months, wages increased 4.7% while the price index rose 7%. Real disposable income fell 0.2% in December. It was the fourth straight month that earnings did not keep pace with inflation. A lower buying power will restrain consumer spending.

Inflation will become the primary concern in 2022. Inflation harms people when their income does not keep pace with rising prices. Hardships mount the longer price increases of essentials such as food and energy exceed an increase in household income. Fed officials are concerned that an extended period of inflation will create a self-fulfilling prophecy by creating a cycle where workers demand higher wages because they anticipate higher prices, and companies raise their prices to cover the added expense. The cycle would push inflation higher and higher.

It is difficult to ascertain how the Omicron variant will affect inflation. On the one hand, inflationary pressures would be less if the aggregate demand falls and businesses close or cut their hours or if people choose to remain home. On the other hand, price levels would rise if Omicron exacerbates supply bottlenecks by worsening staffing problems, closing factories, and keeping goods in short supply.

Central banks curb inflation by raising interest rates. Higher rates slow the economy by reducing the demand for many items because they become more expensive. Business expansions also become more costly. But higher rates threaten employment. The Federal Reserve policymakers have the challenge of guiding the economy to maintain high employment and stable prices. Jerome Powell, chairman of the Federal Reserve, stated that he wanted to keep near-zero interest rates until the economy reached full employment. Economists define full employment as where an economy’s cyclical unemployment equals zero. People who want a job can find a job. December’s unemployment rate plunged to 3.9%. Businesses posted a record number of job openings. They offered higher wages and added flexibility to attract and retain workers. Yet a record 4.7 million people quit their jobs in November, according to recently released data from the Bureau of Labor Statistics. Why? Many quit because of heightened health concerns. Most likely, people resigned to pursue a more attractive opportunity, knowing it is easy to find another job. These are signs that the economy is nearing full employment, even though 3.6 million fewer people are on payrolls than before the pandemic.

Pressure will mount on the policymakers at the Federal Reserve to tighten their expansionary monetary policy as the economy approaches full employment. The Fed may begin tightening soon after their January 23-24 meeting. Initially, they will taper their purchases of long-term assets. But don’t be surprised if they increase rates as soon as March. Most economists believe they will raise the federal funds rate by 0.25% three times during 2022.

Inflationary pressures would ease in 2022 without a tighter monetary policy because people will return to work once they feel safe or deplete their savings. A larger labor pool will slow the increase in wages. As mentioned above, the drop in real wages will restrain consumer spending. A labor shortage and rising labor costs have prompted many companies to invest in equipment to improve productivity. Productivity enables more growth at a lower cost, thereby easing inflationary pressures. Higher Rock predicts the combination of a tightening monetary policy and lessening supply bottlenecks will reduce inflation to 3.50% in 2022.

The Omicron variant will adversely impact the first quarter’s growth, but the effect should be less severe than the Delta variant. It will increase January’s jobless rate and discourage many workers from returning to the workplace in the first quarter of 2022. But continued vaccinations, improved health care, and safer social behaviors will eventually encourage people to return to work and attend more activities outside the home. The economy will continue to prosper in 2022, but continued prosperity depends on people returning to work. Most households are in a healthy financial position. Their incomes have increased, and they have accumulated savings, which have sustained the economy through 2021. But eventually, most working-age people will need to return to work. In doing so, they will slow inflation by reducing pressure on wages and providing the funds required to continue spending.

Have a prosperous and healthy 2022.