The economic recovery stalled in January, but the future is encouraging. Income increased, but consumer spending fell. More people were added to payrolls, but job growth was discouraging. The unemployment rate fell, but primarily because more people were so discouraged that they stopped seeking employment.

COVID-19 cases fell! A sustained recovery depends on containing the coronavirus. Improved health practices and vaccinations will help manage COVID. Household savings, rising stock prices, and, most of all, additional Congressional relief will finance a recovery. Fewer COVID cases and the vaccine will strengthen consumer confidence, and more people will return to restaurants and travel more. Added savings and rising stock prices will provide the means for many to spend more. An increasing aggregate demand will fuel employment growth. But continued diligence is essential because new strains of COVID-19 now threaten the economy’s significant progress. To learn more about the economy's progress and vulnerability, read Higher Rock Education's analysis of the economy's vital statistics in the summary.

According to the Bureau of Economic Analysis’s advance estimate, the US economy continued its recovery in the fourth quarter, but at a much slower clip than the third quarter in 2020. Economic activity rebounded in record fashion in the third quarter as businesses emerged from containment measures imposed to fight the coronavirus’s spread. But cases escalated in the fourth quarter, forcing some communities to reinstate containment measures and many households from venturing into the marketplace. Readers can access the full report Gross Domestic Product, Fourth Quarter and Year 2020, Advance Estimate. The BEA will release its second estimate for the fourth quarter on February 25th.

Consumer spending fell for the second straight month. The largest drop was in durable goods. A growing number of infections, hospitalizations, and deaths prompted many states to reimpose containment measures in December. People remained apprehensive about traveling and eating out. Spending for services increased slightly after falling in November.

Income increased. Much of the income gain was from a new round of government assistance, including unemployment insurance (up $40 billion). However, the growth in income was not limited to higher government transfer payments. Wages and salaries also increased ($47 billion). Read the full report Personal Income and Outlays – December 2020. The highlights are listed below. 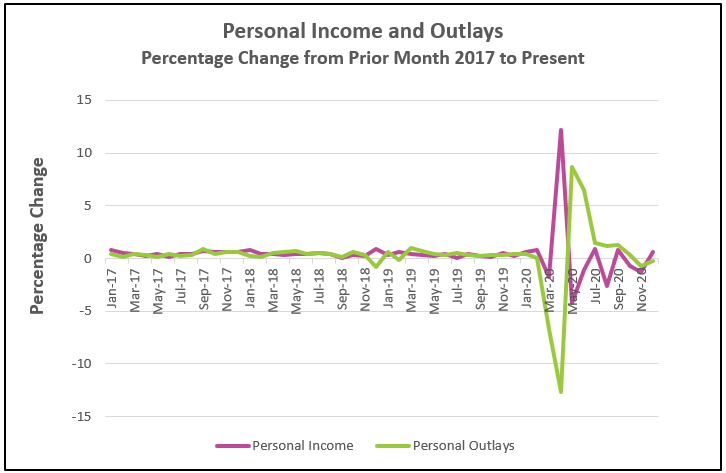 Prices had the largest monthly increase since July when a sharp increase of 0.5% followed a reopening of much of the economy. However, prices remain subdued when measured on an annual basis, and the monthly increase will not dissuade the Federal Reserve from pursuing its low-interest rate policy. Read the full report Consumer Price Index – January 2021. Here are the highlights of the report. 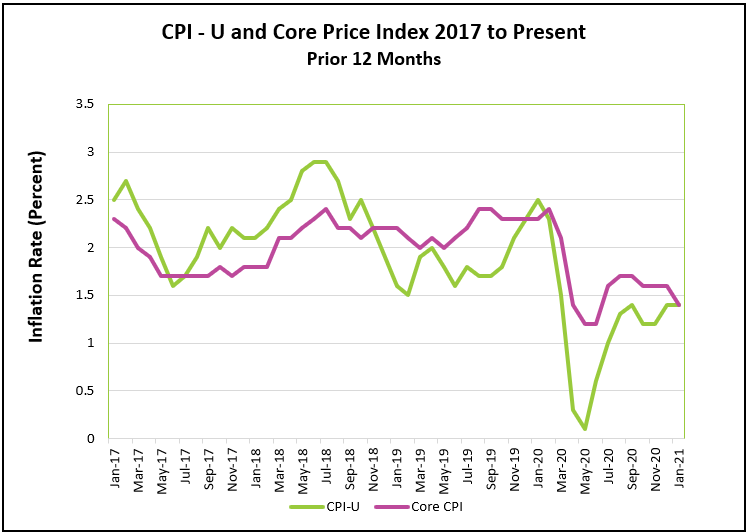 The jobless rate fell slightly in January, but for the wrong reasons. More people became discouraged and left the job market, making them ineligible for being included in the unemployment rate. The number of workers on payrolls grew less than expected. The bar graph below shows the slow but relatively steady increase in the people added to payrolls since the pandemic began. The leisure and hospitality industries continue to suffer the most. The highlights from The Employment Situation – January 2021 are listed below.

The US economy contracted 3.5% in 2020, the first drop since the 2008 financial crisis and the largest in 74 years. An economic recovery began in the third quarter, but growth in the third and fourth quarters was insufficient to make up for the large downturn in the second quarter when containment measures slowed economies in response to COVID-19. The economy grew 1% in the fourth quarter. But escalating COVID cases have threatened any recovery, and the economy continues to struggle into the first quarter of 2021. Consumer spending dipped in November and December because many areas reimposed containment measures. Services suffered the most. Layoffs in lodging, restaurants, and bars followed in January. Sustainable drops in consumer spending would delay or reverse a recovery because consumer contributes nearly 70% to GDP.

January’s 49,000 increase in payrolls was very disappointing. True, it followed December’s large drop, but it was the smallest increase since the pandemic began. Economists had expected there would be more of a rebound following December’s decline. The unemployment rate fell, but for the wrong reason. Many people have stopped seeking employment, either because they are too discouraged or forced to remain home to care for a child who cannot attend school.

But there are signs of improvement. Private and public education added 119,000 workers to payrolls (34,000 in the private sector and 85,000 in the public sector), which helped offset the 61,000 jobs lost in industries where workers deal face to face with customers such as lodging, restaurants, and bars, which cut 61,000 jobs, and retail which declined 37,800 workers. Many businesses had trouble finding employees. Why? Because the pandemic prevented approximately 4.7 million people from looking for a job. They had to remain home with a child who could not attend school or daycare or feared getting sick. Real estate continues to thrive because low mortgage rates have attracted buyers. Businesses are also taking advantage of the lower interest rates by investing in expanding operations, anticipating a rebound.

The $900 billion aid package passed in December is beginning to reach households and businesses. Congress will likely provide more help, one costing approximately $1.9 trillion. The added transfer payments will again bolster consumer spending and income in the coming months and prime the pump for large gains when COVID subsides. Plus, Americans are saving more. They hold nearly $2.4 trillion in savings, almost double the amount they had when the pandemic began. (FRED Personal Savings). Savings will help families if the pandemic persists and propel consumer spending higher when people feel comfortable traveling, dining out, and partaking in leisure activities.

Containing COVID is the only sustainable cure for an ailing economy. Fortunately, the number of cases is trending lower. 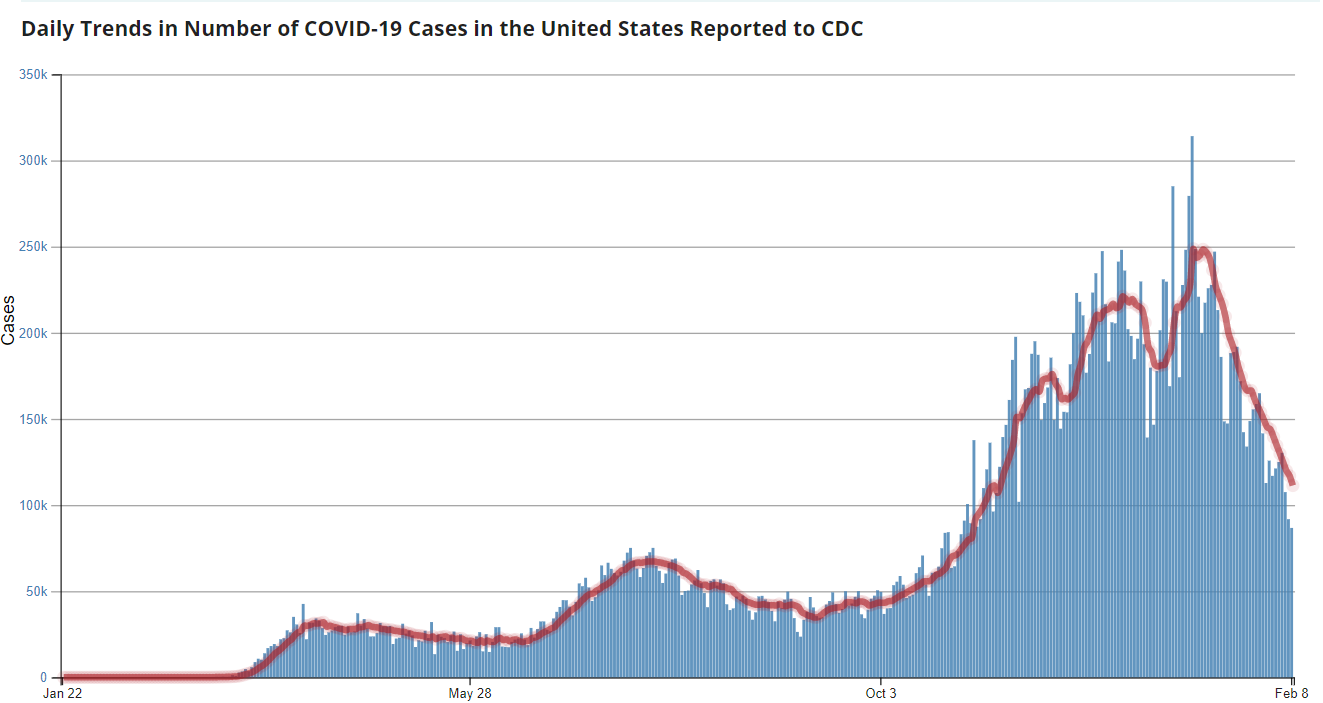 Meanwhile, more people are being vaccinated. Vaccinations will release a pent-up demand. Vaccinations have provided hope and increased consumer confidence, but new strains of COVID are spreading globally and threaten the recovery.

In their January meeting, the Federal Reserve’s Federal Open Market Committee made it clear that they do not intend to raise interest rates until the employment situation has improved. The modest increase in the consumer price indexes will not alter their position. However, the proposed $1.9 trillion package proposed by President Joe Biden will apply upward pressure, but how much. Added income will increase aggregate demand, thereby pushing the price level higher. However, the large supply of available labor should prevent wages from rising.

The aid packages’ magnitude makes it more important that the money is targeted to those hurting and spent efficiently. The gap between the wealthy and poor has widened. Those who work from home continue to earn a salary. Many have benefited from appreciating stock prices and the robust real estate market. This group saved much of their additional income. Some also used it to purchase cars and make home improvements in the third quarter of 2020. But since then, purchases in durable goods have fallen. Added subsidies to the affluent will not spur the economy in the immediate future if people remain home and the money is saved rather than spent. But aid to the struggling businesses and millions of those who lost their jobs and are having trouble finding a new one will be spent shortly after being received. Support targeted to this group will not only reduce hardships, but it will bolster the economy.

The future is brighter. Fewer COVID cases, more people vaccinated, and greater consumer confidence will revitalize the economy. But to get there sooner, we must do our part by practicing social distancing and getting a vaccine when it is available. Once the pandemic is behind us, the pent-up demand will be released and funded partially by the added savings. Until then…