The US economy is gaining momentum, but the Delta variant of the coronavirus threatens the recovery. Real gross domestic product continued its recovery and now exceeds pre-pandemic levels. Having been confined for over a year, people are spending more time outside their homes, traveling, dining out, and buying apparel. Their spending has spurred demand to a point where suppliers cannot deliver many products promptly. The shortages have propelled prices and wages higher, particularly in the leisure and hospitality industries.

Read our summary of vital statistics and analysis to learn more about the US economy’s progress and where it is heading.

According to the Bureau of Economic Analysis's advance estimate, the US economy grew at an annual rate of 6.5% in the second quarter and has rebounded to pre-pandemic levels. Most economists had expected a larger increase, but producers' inability to keep pace with demand restrained the growth rate. Personal consumption expenditures continued to contribute the most to the economy's growth. Vaccinations provided security. The government aid provided money, and establishments continued to reopen. All helped drive consumer spending to the largest increase since the third quarter of 2020 and the third largest in half a century. Consumers returned to restaurants and traveled more, propelling the service industries to large quarterly gains.

Meanwhile, businesses invested in equipment, but this gain was not enough to offset the drop in investment in structures and residences, which were hindered by builders having difficulty acquiring the materials they needed. Lower government transfer payments reduced government spending. The combination of a growing demand and supply challenges have pushed prices up to the highest levels since 1981 and far more than the Federal Reserve's 2% target. To access the full report, visit Gross Domestic Product, Advance Estimate Second Quarter 2021. The BEA will release its second estimate for the second quarter of 2021 on August 26.

Higher wages pushed up income and offset the sharp decrease in government transfer payments. Improving consumer sentiment explains the significant increase in spending on nondurable goods and services associated with reopening the economy. For example, people dined out and traveled more. They also spent more on gasoline and apparel. However, spending on durable goods such as cars fell.

The increase in demand has pushed prices higher. The PCE price index, the measure of inflation favored by the Federal Reserve governors, continued its sharp increase and exceeded the Fed’s target of 2%. Read the full report Personal Income and Outlays – June 2021. The highlights are listed below. 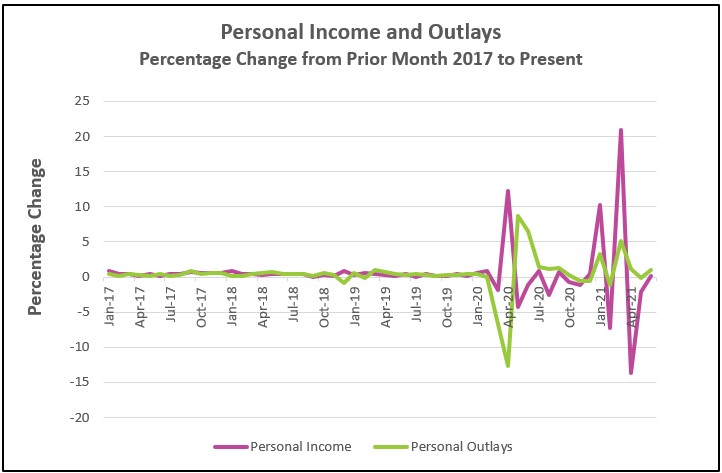 Inflation softened but increases in prices remain alarming. Demand-pull and cost-push inflationary pressures were evident as the economy emerges from the pandemic. Consumers have the money to spend and are spending. Producers are burdened by shortages of supplies, higher labor costs, and shipping bottlenecks. The combination of heightened demand and higher costs have made it easier for businesses to raise prices. Furthermore, consumers are beginning to expect price increases. Government officials insist that the pressure is short-term. Whether or not they are correct has enormous policy implications. Some are discussed below in the Summary and Analysis section. Read the complete report Consumer Price Index – July 2021. Here are the highlights of the report. 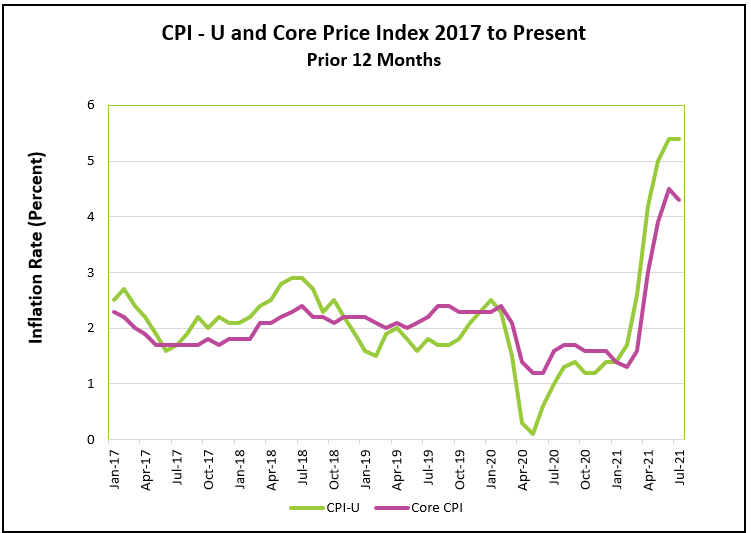 Momentum in employment increased with the fourth consecutive rise in payrolls. Almost 17 million people have been added to payrolls since February 2020, but total payrolls remain 5.7 million fewer than before the pandemic began. Businesses are continuing to hire at an accelerated rate. There are more job openings and fewer people willing to work than before the pandemic, which is putting upward pressure on wages. The leisure and hospitality industries have hired the most workers to keep pace with a growing demand caused by consumers returning to restaurants and traveling. The greater demand for labor has put upward pressure on wages. Many employers are offering higher pay and more attractive benefits to attract workers. The highlights from The Employment Situation – July 2021 are listed below.

The US economy continues to grow at an extraordinary rate, and it now exceeds the pre-pandemic size. Consumers are spending, and businesses are unable to keep pace. Depleted inventories reduced the quarterly growth rate by 1.1%. Bottlenecks at ports continue to delay shipments. A shortage of building supplies and labor prevented RGDP from rising an additional 0.5%. Some workers remain apprehensive about returning to work. Together these challenges have restrained the economy and applied upward pressures on prices. 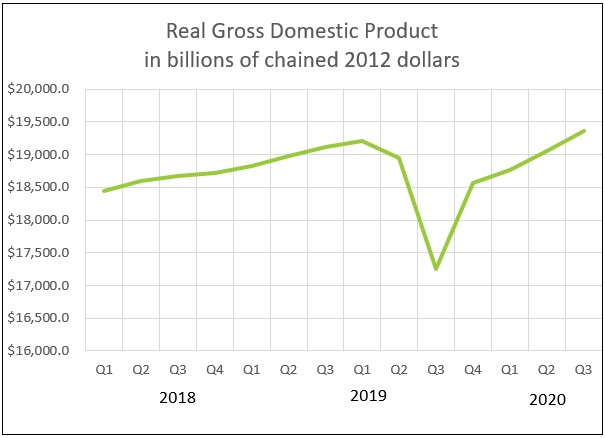 The economy’s health is now less reliant on government transfer payments and more dependent on wages and salaries. Recently the transfer payments decreased, while wages and salaries jumped 0.8% in July. The transition from relying on government handouts to wages and salaries indicates the economy is returning to normal. Those groups who were hurt the most by containment measures have experienced the largest increase in wages. The average wage increased 4% over the prior 12 months, but workers in the leisure and hospitality industries have benefited from a nearly ten percent increase.

Spending patterns are also returning to normal. During the early stages of containment, many people purchased durable goods, such as improvements for their homes or a car. More recently, consumers have increased their spending for nondurable goods and services such as local restaurants, releasing a pent-up demand from months of confinement, encouraged by fewer Covid cases and the security of being vaccinated. (This is before the recent increase in the Delta variant.) Restaurants provide an example of how a pent-up demand and supply challenges have combined to trigger higher dining prices. While the demand for dining out has increased, restauranteurs also face higher food prices and labor costs. Many restaurants have responded by increasing their prices to reimburse their higher costs and meet the demand increase. The price of food outside the home increased by 0.8% in July.

The inflation rate fell in July, but it remains historically high. Whether measured by the Federal Reserve’s preferred PCE price index or the more often quoted consumer price index, inflation far exceeds the Federal Reserve’s target rate of two percent.  Economists debate whether or not this is the beginning of a harmful inflationary spiral. Most Federal Reserve officials insist the inflationary pressures are linked directly to COVID and should dissipate. For example, June’s 10.5% increase in used car prices was tied to car manufacturers’ trouble securing chips and shipping delays. In June, used car prices contributed one-third of June’s month-to-month increase, but by July, used car prices increased 0.2%. These economists believe pressure on wages will abate when many of the 1.6 million people who have been prevented from working because of COVID return to the labor force. A combination of higher wages and the expiration of many government aid programs enticed 560,000 long-term unemployed people to return to the job market. The Fed expects the trend to continue.

Other economists are concerned there is a severe risk inflation will get out of control. Consumers are more accepting of higher prices. A New York Fed survey recently concluded that the general population believes inflation will increase, which likely means they are more accepting of price increases. They point to increases in gasoline prices, food, and rent that are not directly linked to COVID. But real wages fell 0.1% in July, which means the average worker is worse off because prices have increased more than wages.

Excessive inflation hurts families on a fixed income and people whose earnings rise less than the inflation rate. Businesses are hit with higher costs and may not be able to raise their prices. Interest rates usually rise during inflationary periods. First, lenders increase their nominal rates to compensate for lower real (after inflation) returns. Second, the Federal Reserve typically increases rates to slow the inflation rate. The threat of higher inflation may jeopardize the passage of President Biden’s spending package.

The Delta variant threatens the recovery. The CDC reported that new cases average 132,000 per day, up from 12,000 in June, compared to 250,000 in January. Much of June and July’s data were collected in the middle of the month – before municipalities and businesses renewed some containment measures. The economic statistics are probably worse today. New York City recently canceled the New York International Auto Show. Wal-Mart and Amazon are among the many companies that have reimposed mask requirements. These measures alone will slow the economy. If the surge in COVID cases frightens people into retreating into their homes, it will weaken the economy. People who would have returned to work may delay returning. And all of this when many of the government programs, including supplemental unemployment insurance, expire.

Covid cases will continue to escalate, and municipalities and companies will respond. The Fed will delay increasing interest rates until it sees how the Delta variant plays out. Fortunately, vaccinated people will prevent the economy from returning to the depths of March 2020. Vaccinated people will continue to visit restaurants and other venues. The economy will also be partially insulated by the trillions more dollars in savings Americans have than before the pandemic. The Delta variant of COVID will slow the economy’s momentum, but it is unlikely to throw us back into a recession.