Is the economy growing too fast? Will inflation become a problem? Many economists are concerned President Biden’s $1.9 trillion stimulus package, and $2.0 trillion infrastructure proposal are too aggressive because they will cause a harmful increase in the price level. The International Monetary Fund recently upgraded its 2021 economic growth projection for the US economy to 6.4%, which would be the most since 1984. If shortages develop, inflation would likely result. To learn more about the US economy’s progress and where it is heading, read our summary of vital statistics and analysis.

The US economy grew 4.3% in the fourth quarter of 2021, according to the Bureau of Economic Analysis’s (BEA) revised estimate of the economy’s real gross domestic product. The economy continued its recovery, but at a much slower pace than the third quarter in 2020, when businesses emerged from containment measures imposed to fight the coronavirus’s spread and economic activity. The financial and insurance industries contributed the most to the economy’s improvement, while reinstated containment measures and government spending cuts reduced growth. The table below breaks down the contribution by industry group. To access the full report, visit Gross Domestic Product, Fourth Quarter and Year 2020, Third Estimate. The BEA will release its advance estimate for the first quarter of 2021 on April 29. Most economists expect accelerated growth as the US emerges from the pandemic. 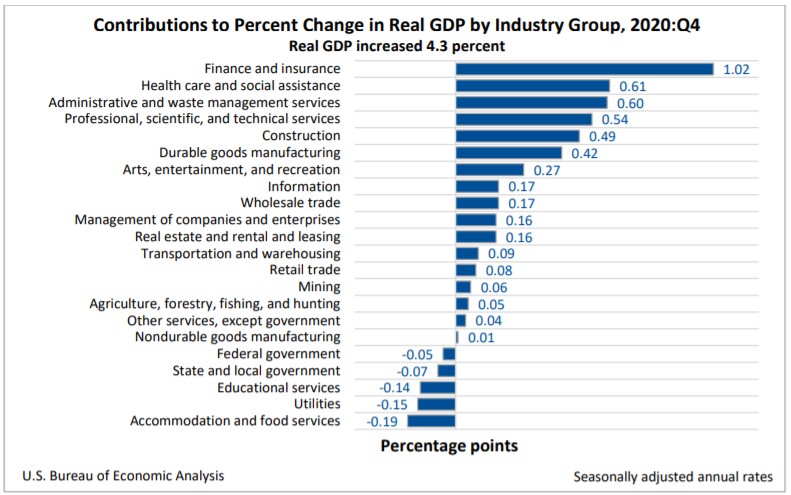 In April 2020 and January 2021, massive transfer payments propelled household incomes higher, which in turn spurred spending following each round of government stimulus. February’s income decreased following January’s supplemental payments. Wages and salaries were little changed, so the drop in February’s income was almost entirely from lower transfer payments. Severe weather deterred many from shopping and contributed to the drop in consumer spending in February. Economists expect the decrease in income and spending will be short-lived because history will repeat itself because most households received an even larger stimulus check in March. (March's report will be published April 30.) Read the full report Personal Income and Outlays – February 2021. The highlights are listed below. 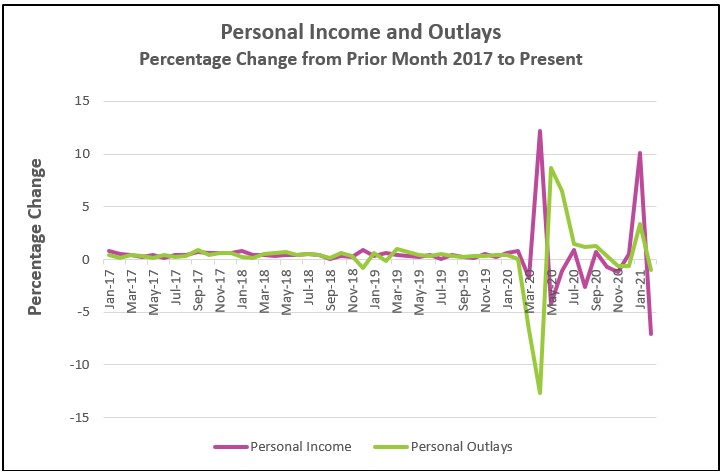 The emergence from the COVID-19 has contributed to price increases. Industries that lowered their prices during the containment measures were able to raise their prices. People venturing out has increased the demand for gasoline, pushing up gasoline prices. Gas prices contributed nearly half to the jump in March’s price level. The price increases were not limited to gasoline. Services such as hotels and motels (up 4.4%), car and truck rentals (up 11.7%), and the admission to sporting events (up 4.7%) also benefited a rising demand. Do the recent increases point to a troubling trend? Most economists do not think it does, and Federal Reserve Chairman Powell has not expressed sufficient concern to raise interest rates. Read the full report Consumer Price Index – March 2021. Here are the highlights of the report. 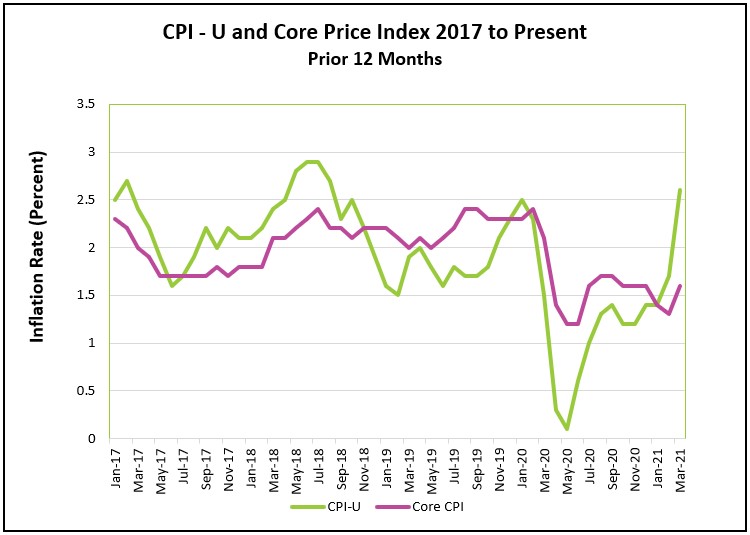 Businesses are hiring! March had the largest payroll increase since August, pushing the unemployment rate to its lowest point since the pandemic began. Gains were in almost every industry. Only auto manufacturing and temporary services did not share in the gains. Chip shortages slowed auto manufacturing. Businesses grew more confident in the future and chose to hire permanently rather than temporarily. The reopening of schools contributed to 492,000 women re-entering the workforce.

However, the US economy has 8.4 million fewer jobs than before the pandemic. Normally, growth in the population and the economy would have generated 2 million jobs in a year, meaning the US economy needs to gain ten million jobs to return to full employment. The highlights from The Employment Situation – March 2021 are listed below.

December’s $900 billion COVID-19 aid package contained up to $600 in direct payments to millions of households and an added $300 weekly to unemployment insurance. These measures increased household income ten percent in January, the most since the government’s prior stimulus checks in April. Households received another round of stimulus checks in late March. This time millions of Americans will receive $1,400 checks, and the unemployed will continue to receive a weekly supplement check. These transfer payments should continue to propel income and spending even higher. Households saved much of their past stimulus checks. Hence, economists expect that savings that reached record levels will likely continue to rise, providing added probability that the economy will continue expanding.

Vaccinations, nicer weather, and cabin fever have contributed to people venturing out more, whether it is traveling, dining out, or visiting friends and family. These trends will reduce the economy’s dependence on future transfer payments. Most importantly, COVID cases have diminished. The greatest threat to our recovery is a resurgence of COVID cases. 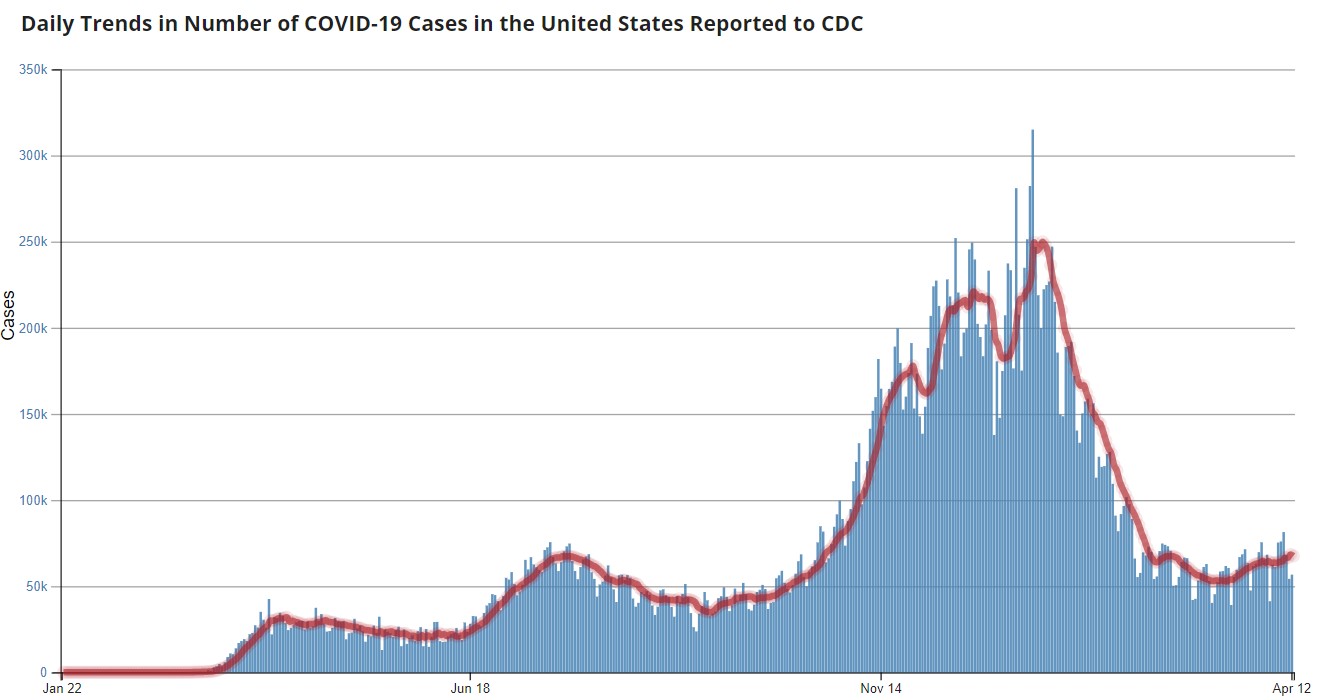 Businesses hired in almost every industry, but those most hurt by the containment measures had the largest increase in payrolls in March. For the second straight month, the largest increase in employment was in the leisure and hospitality category. Schools added 190,000 workers. Women benefited the most, with 492,000 joining the labor force. Many had remained home with a child who could not attend school or daycare. Others benefited from the rehiring in industries such as restaurants, hotels, and education that have a disproportionately large number of women workers. Hiring in all industries, but especially the services, is expected to continue as more people are vaccinated. Warmer weather will attract more outdoor activities such as outdoor dining and visits to parks.

However, 8.4 million fewer people are employed than in February 2020, before containment measures were imposed. The unemployment rate has fallen to 6%, but that includes only those who are actively seeking employment. Millions of workers want to work but have given up trying. The unemployment rate would equal 10.7% if it included people who want to work but are no longer seeking employment and those who work part-time but would prefer to work full-time. Employment in leisure and hospitality remains 3.1 million less than in February.

Higher incomes and more spending have increased the economy’s aggregate demand and prices. Inflation rose at the fastest clip since August 2018. A surge in gasoline prices accounted for nearly half of the increase. But the gains were not limited to gasoline. Many of the industries that suffered the most from the pandemic benefited from large price increases, including hospitality, airlines, and car rentals. Each of these had to reduce its prices during the recent recession.

Will a rising price level threaten the recovery by pushing the Federal Reserve to increase rates? Not likely. The sharp increase is partially overstated. Twelve months ago, prices fell, so today’s rise is from a lower base. For example, prices are 2.4% higher if measured from February 2020 before the pandemic began. However, because prices fell in March, the 2.6% increase over the prior 12 months exceeds the 2.4% increase since the pandemic began. Economists refer to this as the base effect. Most economists, including those at the Federal Reserve, believe the base effect will only last a few months.

Furthermore, the rising prices have probably resulted from increases in demand in a few industries with a pent-up demand, rather than the economy as a whole. Inflation occurs when an economy reaches its production capacity. There are too many dollars chasing too few goods and services, so the price of most goods and services are bid higher. Adding more goods and services to meet the increase in demand reduces inflationary pressure. The large number of unemployed people indicates that the economy has a great deal of additional capacity. The Federal Reserve’s FOMC acknowledged this when it reported that the committee does not intend to raise interest rates until the employment situation has improved.

The future is bright. The economy will continue to grow at a booming clip, and employment will continue to increase. The greatest threat to our prosperity is a resurgence in COVID cases. Fewer COVID cases, more people vaccinated, and greater consumer confidence will lessen consumer reluctance to venture away from home. To get there sooner, we must do our part by continuing to practice social distancing and getting a vaccine when it is available. Once the pandemic is behind us, the pent-up demand will be released! Until then…