A new round of stimulus and supplemental unemployment checks revived the US economy in February. Income increased and households responded by increasing their spending and saving. Businesses hired. Even the news regarding COVID cases was encouraging. And this doesn’t include the additional fiscal stimulus from the Biden package. Most economists expect the additional spending will continue to prop up the economy. The news is good the economy should continue its robust recovery without a new outbreak of the coronavirus. To learn more about our progress and where we are heading, read our summary of vital statistics and analysis.

According to the Bureau of Economic Analysis’s (BEA) second estimate, the US economy continued its recovery in the fourth quarter, but at a much slower pace than the third quarter in 2020, when businesses emerged from containment measures imposed to fight the coronavirus’s spread and economic activity. But because cases escalated in the fourth quarter, some communities reinstated containment measures, and many households were apprehensive about venturing into the marketplace. But businesses invested in equipment in anticipation of expansion in the second and third quarters. Readers can access the full report Gross Domestic Product, Fourth Quarter and Year 2020, Second Estimate. The BEA will release its third estimate and corporate profits on March 25th.

Government transfer payments increased 52%, which boosted household incomes to more than before the pandemic. Households began receiving and spending their new stimulus checks in late December and early January. They also saved. Spending on services reversed its downturn and grew for the first time since October, but its gain was minimal, only 0.5%. People remained cautious and limited their traveling and eating out, which has held spending in the services industries to 4.4% less than before the pandemic. But households continued to improve their homes and purchased durable goods such as vehicles. Read the full report Personal Income and Outlays – January 2021. The highlights are listed below. 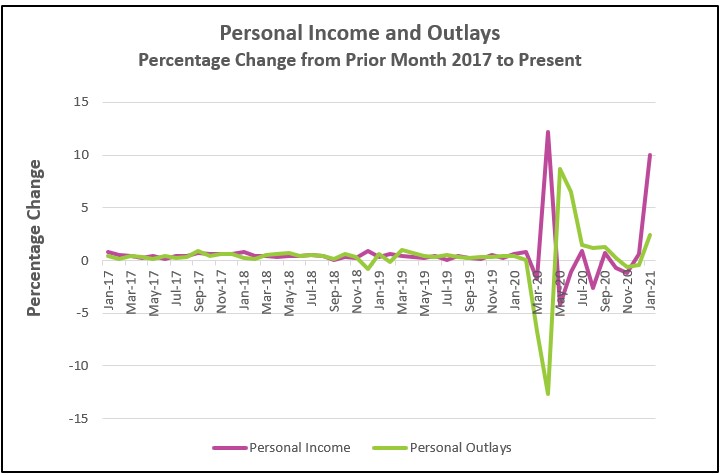 Inflation is gaining strength. February’s prices rose more than any month since July when a sharp increase of 0.5% followed a reopening of much of the economy. A rise in gasoline prices accounted for more than half of the aggregate increase in February’s prices. However, prices remain subdued when measured on an annual basis, and the monthly increase will not dissuade the Fed from pursuing its low-interest rate policy. Read the full report Consumer Price Index – February 2021. Here are the highlights of the report. 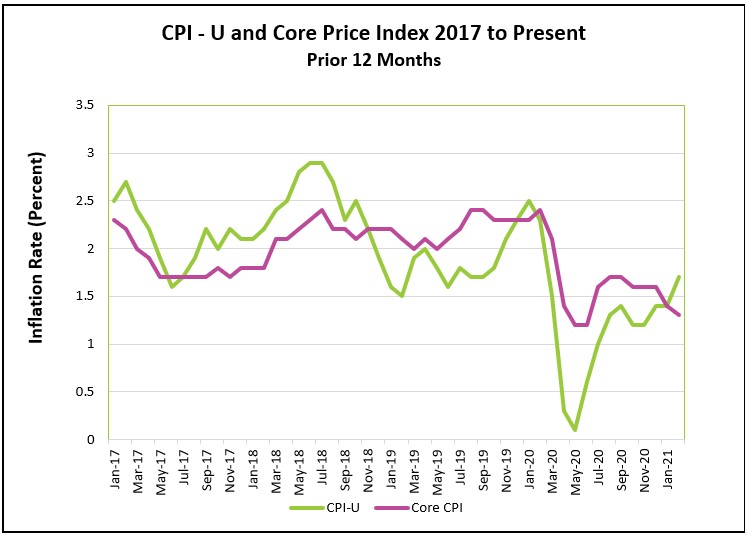 U3, the standard unemployment rate fell to 6.3%. Many economists, including Federal Reserve Chairman Powell, believe the figure does not accurately portray the employment situation because COVID concerns have prevented many workers from re-entering the workforce. An individual must be seeking employment to be considered unemployed.

Since last March, containing COVID-19 has been required to restart the US economy. Government spending has provided a shot in the arm twice. Following the contraction in the second quarter of 2020, the economy rebounded. But because the number of COVID cases accelerated, the rebound stalled. The federal government again passed a massive stimulus package at the end of 2020, and the economy again responded. Congress passed a third package that is an even larger third package on March 10th – which will again stimulate the economy. Fortunately, this time COVID cases are trending lower, and it appears as if the pandemic is more under control, so the rebound should be longer.

December’s $900 billion COVID-19 aid package contained up to $600 in direct payments to millions of households and an added $300 weekly to unemployment insurance. These measures increased household income ten percent in January, the most since the government’s prior stimulus checks in April. Additional payments that many will receive in late March and the beginning of the second quarter should continue to propel income and spending even higher. This time millions of Americans will receive checks up to $1,400, and the government will continue the weekly supplement of unemployment insurance.

As in April 2020, households spent much of the additional income. January’s 2.4% increase in consumer spending was the most since June. Durable goods purchases increased by 8.4%. Households also saved. The savings rate increased to 20.5% of disposable income. Meanwhile, spending on services increased a meager 0.7%, but it was the first increase since October. Services comprise over 60 percent of consumer spending, so any sustainable growth must include a recovery in the service industries.

Most likely, the services are experiencing growth. The BEA will release February’s spending figures on March 26th, and it will probably reflect an increase in spending for services during February. The BEA’s Personal Income and Outlays – January 2021, provided January’s figures. During February, restaurant and bar managers believed the future was brighter and hired 286,000 workers, according to the most recent report from the Bureau of Labor Statistics.

Companies in most other industries also hired workers in February. Many businesses had trouble finding employees. Why? Because the pandemic prevented approximately 4.2 million people from looking for a job. They had to remain home with a child who could not attend school or daycare or feared getting sick. Government payrolls were cut by 86,000 workers, mostly in state and local education. Construction also experienced a loss in payrolls, but the drop is probably more attributable to the harsh weather in February than a fall in demand.

Higher incomes and more spending have increased the economy’s aggregate demand. Economists will not know how much until the pent-up demand is released after people feel more secure venturing out. Warmer weather, more vaccinated people, and fewer COVID cases will likely reassure many, which in turn will precipitate continued hiring at record levels.

But the higher aggregate demand will also increase the price level. Already gasoline prices jumped 6.4% in February, which follows a 7.4% rise in January. The improving economy has increased the demand for fuel. Bond yields have increased because bond traders expect a higher price level will raise interest rates. Will the rising price level threaten the recovery by pushing the Federal Reserve to increase rates? Not likely. Federal Reserve’s FOMC made it clear that they do not intend to raise interest rates until the employment situation has improved. The modest increase in the consumer price indexes and bond yields will not alter their position soon.

However, the recovery is uneven. Nearly ten million people who want to work are still unemployed  – primarily in the service industries. Employment in leisure and hospitality remains 20.4% lower than a year ago. While usually adding 379,000 workers to payrolls in a month would be staggering, it is important to consider that it would take two years of similar gains to return to pre-pandemic employment even at this remarkable rate. It is also disheartening that the number of long-termed unemployed remained little changed. The long-term unemployed (those who have been unemployed for 27 weeks or longer) usually have the most trouble finding a job. In some recent comments, Federal Reserve Chairman Jerome Powell emphasized that we have a long way to go before returning to where we were before the pandemic.

But, the future is brighter. The government will soon provide a third shot to the economy with their assistance package. What will people do with the money? Economic growth is not solely dependent upon the government’s transfer payments, especially if they add the money to households’ savings accounts. People must spend for businesses to hire. If they do, job growth will continue to gain momentum. Will restaurants, bars, theaters, arenas, and other public venues be filled before the end of the year? That will depend on continuing efforts to contain COVID. Fewer COVID cases, more people vaccinated, and greater consumer confidence will lessen consumer reluctance to venture away from home. To get there sooner, we must do our part by practicing social distancing and getting a vaccine when it is available. Once the pandemic is behind us, the pent-up demand will be released! Until then…