The economy is headed in the right direction. Real Gross Domestic Product (RGDP) grew at a record clip. More people are being added to payrolls, and consumers continue to spend, all while new cases of COVID-19 increase at an exponential rate. Will the growing number of cases and deaths be enough to threaten the recovery? Many European countries have reimposed containment measures. Some states and cities across the US are expected to return to on-line learning and restrict activities. If so, layoffs will follow. Without renewed government assistance consumer spending will dip again. Many economists, including Federal Reserve Chairman Jerome Powell, believe additional fiscal stimulus is needed to continue the momentum of recovery into the fourth quarter. But some policy makers argue that no additional stimulus is needed. Deficits are out of control, and the government needs to resist increasing spending. What should be done? These options are discussed in the Summary and Analysis section below.

The US economy rebounded in record fashion in the third quarter, according to the BEA’s advance estimate – but the economic activity remains below pre-pandemic levels. Growth followed the reopening of the economy. Consumers and businesses opened their checkbooks. Households spent much of the money received from the federal government during the second quarter. But, personal income fell in the third quarter, largely due to the July expiration of many of the federal government subsidies put in place to bolster the  economy. The revised results are summarized below. Readers can access the full report at the Gross Domestic Product, Third Quarter 2020, Advance Estimate.

Consumers continue to spend more on goods and services. Providers of durable goods such as automobiles and home improvements benefited the most from the increased spending. Durable goods expenditures now exceed pre-pandemic levels. Spending for services also increased since August but remains below where it was in February.

Personal income rebounded in September following its fall in August. Compensation to employees rose $86.2 billion. But “other personal transfer receipts” increased $247.7 billion. The transfer payments included the weekly $300 supplemental unemployment insurance President Trump ordered to replace the $600 supplemental insurance payments that expired in July. Read the full report by following the link Personal Income and Outlays – September 2020. The highlights are listed below. 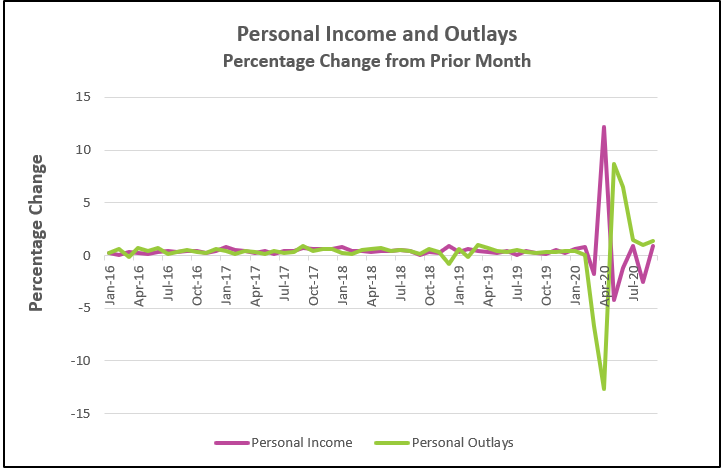 Prices were unchanged in October. Increases in the price for electricity, airfares and new cars were offset by a drop in the price of motor vehicle insurance, dairy products, and medical services. Read the full report by visiting Consumer Price Index – October 2020. Here are the highlights of the report. 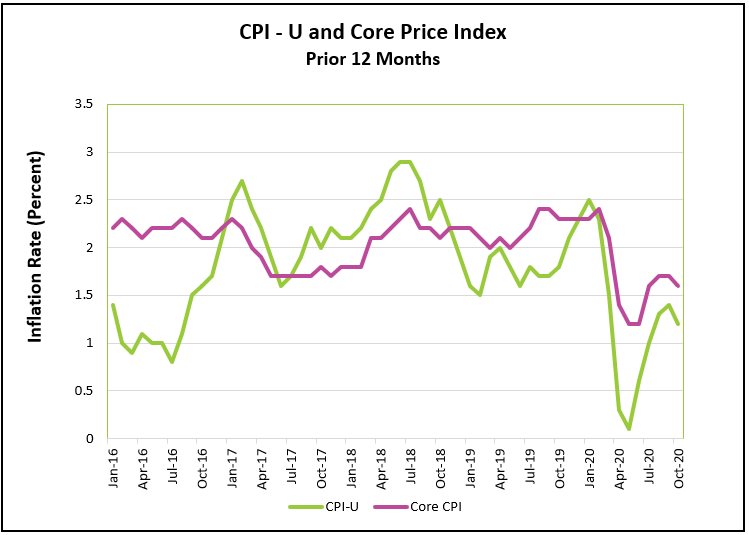 The jobless rate has continued to fall since it peaked at 14.7% in April – but it remains much higher than in February when the unemployment rate fell to a historic low of 3.5%. While payrolls have increased each of the past six months, over 11 million people remain unemployed. The number of long-term unemployed is increasing and more people have chosen to accept a part-time job because they have had difficulty in finding full-time employment. The highlights from The Employment Situation – October 2020. are listed below. 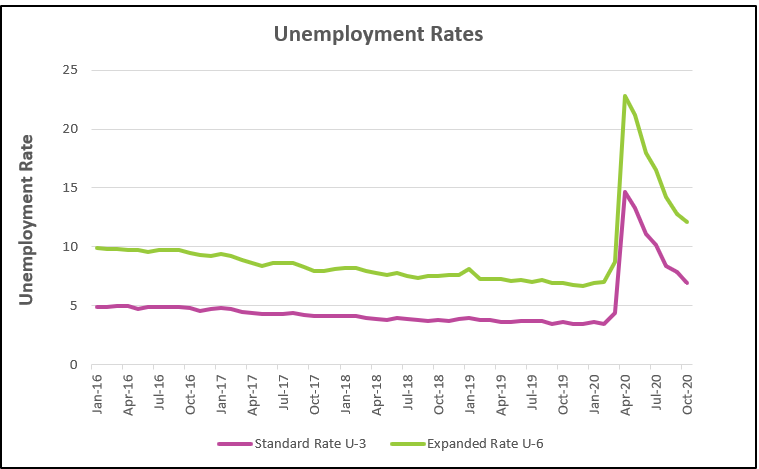 In the third quarter, the US economy continued its recovery from late in the second quarter and grew a record 7.7%, or 33.1% when measured on an annual basis. The previous record was 16.7% growth on an annual basis post-World War II in the first quarter of 1950. A rapid recovery was inevitable when the containment measures were lifted. However, the extent of the contraction between March and April prevented the third quarter’s output from achieving levels it did at the end of 2019. The economy remains 3.5% smaller than at the end of 2019. Many economists believe continued growth is threatened by the recent exponential rise in COVID-19 cases. 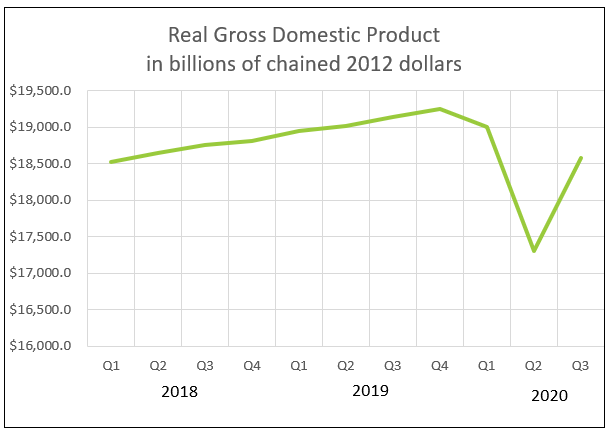 Source: US Bureau of Economic Analysis

Consumer spending is the largest contributor to the US economy. It plummeted 12.7% in April. Congress responded quickly by authorizing supplemental income and unemployment insurance to replace the income lost when 22 million people lost their jobs. Government assistance raised incomes to more than before the pandemic. Household income rose a record 14.8% in April. People responded in May by spending and saving. Consumer spending has continued to increase in each of the last six months, but like the RGDP graph above, it remains below its peak in the first quarter.

Durable goods purchases increased 3.0% in September. During the third quarter consumers bought $200 billion more durable goods than in the fourth quarter of 2019 (using seasonal adjusted annual rates). Households are buying new cars and making improvements to their homes. By contrast, the service sector, which employs over 75% of the workforce, has suffered. Sales in the third quarter increased 9.2% but remain $656 less than in the fourth quarter of 2019. Working from home has increased the demand for service companies that cater to home improvements such as landscaping, painting, and cleaning. But retail, restaurants, and travel have not fully recovered. For example, the food and accommodations service group improved in the third quarter, but sales remain 18.2% lower than at the end of 2019.

It is encouraging that 906,000 people were added to payrolls in the private sector. Layoffs continue to fall but remain historically high. Last week, 709,000 people filed for unemployment. This compares to an average of 200,000 prior to the pandemic. It is noteworthy that the employment surveys were taken in the second week of October, before the recent surge in COVID cases. Economists are concerned that a spike in layoffs of lower paid workers may occur as cooler months approach and people spend more time indoors and cutback on outdoor activities.

Jobs are indirectly threatened by changing consumer attitudes. The University of Michigan’s Index of Consumer Sentiment has fallen as the number of COVID cases continues to rise at an alarming rate. Many economists are concerned that a lower consumer sentiment threatens consumer spending and the recovery. Households spend less when they are worried about the future. Consumers may choose to practice more social distancing, which would mean venturing out less frequently, threatening to reverse the employment gains in the entertainment industries. Businesses share the concern. About one in six new hires was for a temporary worker, which suggests that employers are cautious about the future. In addition, many people (383,000) accepted part-time work when they would have preferred full-time.

Congress is debating a new stimulus package to provide people income to continue their spending. Without added government help future increases in spending will need to be generated from increased economic recovery in the private sector. Adding jobs is the only sustainable way to increase household income and increase consumer spending - but job gains depend on an increase in consumer spending! If the pace of consumer spending slows, the recovery will slow.

The Federal Reserve has done its job by maintaining near zero percent interest rates and assuring that banks have the funds to lend. But most economists believe an accommodative monetary policy is not enough. Additional fiscal stimuli are needed. The recovery is threatened if Congress fails to pass another stimulus package. Federal Reserve Chairman, Jerome Powell has repeatedly encouraged Congress to act now. Congress acted quickly when it passed the CARES Act soon after containment measures all but shut down the economy. Economists agree that the economy would have deteriorated much more without the $3 trillion investment by the federal government. Consumer spending and  employment increased after households received the one-time stimulus checks, a weekly $600 unemployment insurance supplement, and other measures. Income and spending fell following the expiration of these programs in July. They increased again when a $300 weekly federal unemployment insurance supplement was introduced.

Critics believe the US cannot afford another round of stimulus. There is no doubt that growth of the deficit is unsustainable at today’s rate. The deficit has increased from $1 trillion to $3 trillion in the past year. Growing deficits are normal when an economy slows because government spending increases while tax revenues subside. Fortunately, low interest rates make borrowing more attractive for the federal government, so many economists believe there is still room for borrowing. However, this view is short-sighted. Eventually, the debt will mature. How does the government repay its debt? By refinancing it and issuing more debt. If rates are higher when refinanced, then the deficit will balloon further out of control. However, now is not the time curtail spending. Deficit spending is appropriate during periods when fiscal stimulus is needed to lift the economy. Greater budget discipline will be needed when we emerge from the recession.

The easy part is done, but now the hard part – getting people off the government payrolls by getting those who are long-term unemployed back to work. The fastest way to accomplish this is to minimize the impact of the pandemic. We must do our part by wearing a mask and responsibly practicing social distancing. By working together, the economy will fare better and continue its improvement, but behaving irresponsibly will force government leaders to curb economic activity, which will slow the economy, and delay the recovery.