Friday, September 30, 2016
The Wall Street Journal recently published its inaugural Higher Education Rankings with Times Higher Education in an article by Melissa Korn and Douglas Belkin. It was posted on September 27, 2016 at 10:40 p.m. Use this link to access the articles if you subscribe to The Wall Street Journal. I have summarized the article for those who are unable to access it.

I bring your attention to this study because it is one of a few that focuses on outcome. Most studies I have read rank SAT scores, selectivity, and class rank. Others focus on the best value. The college "experience" is great, but you are really paying for the benefits (outcome) of a college education. The survey was comprehensive. It included over 1,000 schools in four categories. In addition to outcomes, it ranks the school's resources, a student's engagement with the community, and environment. It includes a great interactive exercise ranking the schools.

The top 10 in overall schools are: 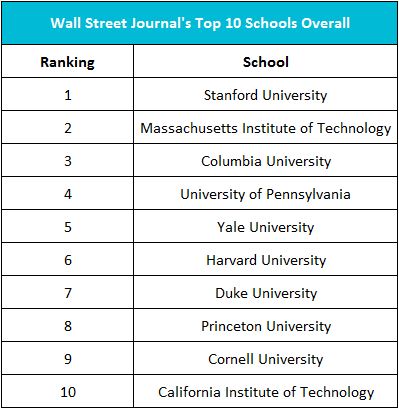 I like the way the study separates its rankings, so students can narrow their search. For example, schools like Amherst and Williams were at the top of the small liberal arts schools, but surprisingly low in student engagement. The amount spent per student and the outcome pushed the rankings higher rather than engagement in the classroom and community.

Missing from the study were the Military Academies, schools where over twenty percent of the students take courses exclusively on-line, and schools with an enrollment less than 1,000 students. The Military Academies were excluded because students receive a government paid education, making some of the criteria used in the ranking impossible to measure (such as a loan default rate). Student engagement would be very difficult to measure when a university emphasizes on-line study.

Outcomes were the most weighted category. After all, the main reason to go to college is to invest in your future and acquire the skills needed to be successful (monetarily and personally). Included in this category are graduation rates, graduate salaries (starting and future), and the relationship between starting salaries and loan repayment rates. 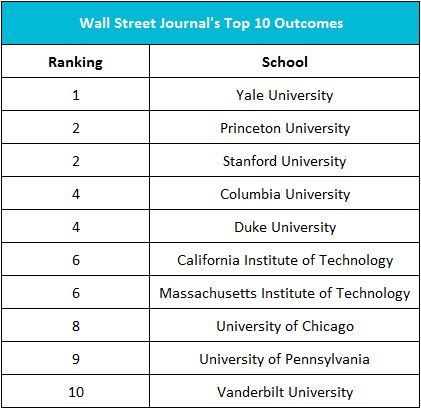 Engagement is another category. The WSJ defines engagement as "a measure of how connected with their school, each other and the outside world, and how challenging their courses are, among other things." An engaged student is one who brings lessons learned in the classroom to make the world a better place. It is interesting that religious schools dominated this category. The speculation is these students shared values, received more pastoral care, and felt more a part of a community. 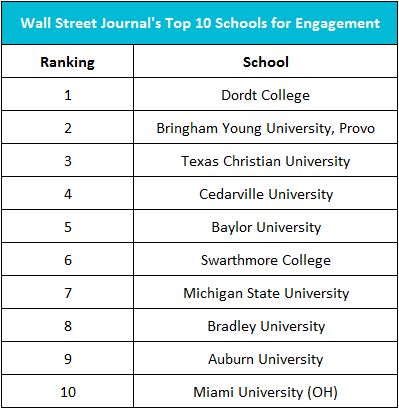 Included is useful information about each school such as: enrollment, cost, student faculty ratio, and the average salary one decade after graduating. Student responses to survey questions are tabulated. Students are inundated with material when trying to decide where to attend college. It can be overwhelming, but I hope this article is helpful.