Has Outsourcing contributed to the loss of American Jobs?

When companies transfer work to an outside supplier, it outsources the work. This can be done locally. For example, I outsource the cleaning duties of my office to a local commercial cleaner. Companies may outsource production because the other producer can produce a good or service at a lower cost. Perhaps it is more efficient. Perhaps it pays less for labor. Outsourcing has resulted in plant closures.

What is the cost of plant closures?

Shutting down a plant and the resulting loss of jobs is not a pretty sight. Most of us empathize with the workers who lost their jobs. For many, it hurts even more that those jobs were lost to foreign producers. Donald Trump has proposed a 35 percent "border tax" on companies that outsource production and then sell the product manufactured abroad in the United States. For example, many automobiles including the Chevrolet Silverado, Ford Fusion, Ford Fiesta, and Cadillac Escalade EXT are assembled in Mexico and sold in the United States. Since the US Presidential campaign, many companies have agreed to increase production domestically. Carrier received the most attention after it chose to delay moving production to Mexico and retain approximately 800 employees in Indiana. $7 million in tax breaks from Indiana was an incentive. (Read CNN and WSJ.) Let's assume that a 35 percent tax discourages companies from outsourcing. What is the cost? Let's review the economics.


Why do companies outsource?

There is one overriding reason companies outsource – to reduce their costs. How does this affect the consumer? This is easily seen on a supply and demand graph. Assume Widgets Rock manufactures widgets. Supply1 and Demand represent Widget Rock's initial supply and demand curves. The resulting price is P1, and production is Q1. Management learns it can significantly lower its manufacturing costs by outsourcing production. Widget Rock's supply curve shifts to Supply2 following a decrease in its production costs. Note the resulting reduction in price and increase in quantity produced. The new price equals P2 and production increases to Q2. 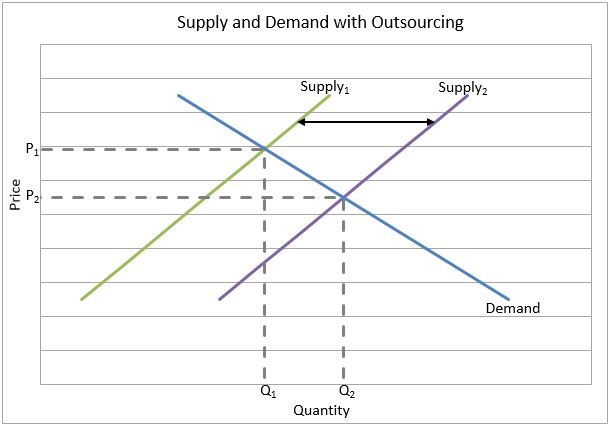 Now assume the 35 percent tax provides a sufficient incentive to return production to the United States. Widget Rock's supply curve shifts back to Supply1 and everyone gets their job back! (More on this later.) The price would return to P1 and output would decrease to Q1. Would you as a consumer be willing to accept an increase in price from P2 to P1 to save the jobs?

Another cost is the resulting loss of jobs from the reduction in sales of items that would have been purchased with the cost savings for widgets or any other product that had been produced with outsourced labor. For example, assume the outsourced product is an American car. Prior to the tax on outsourcing, the car cost $25,000. Following the implementation of the tax, the car's price jumps to $25,700. You now have $700 less to spend on other items. Perhaps you would choose to eat out less or forgo purchasing some clothing. These businesses would suffer and possibly lay off some workers.


Does the tax on outsource eliminate foreign competition?

Does this tax eliminate foreign competition? Probably not. Assume companies outsource to save money, but only return to avoid the 35 percent tax. They still have a cost disadvantage in production – otherwise they would not have initially outsourced the production. What is to prevent foreign companies from producing the product, exporting it to the United States and undercutting the American producer's price? The loss in jobs could be great, as in the television industry, where US companies dominated the market in the 1950s and lost it to Asian producers. A less severe example is the automobile industry where American automobile manufacturers have been able to compete, partially because they have used outsourcing to cut their costs. Manufacturers will need to reduce their costs through automation or going the way of American produced televisions – but automation results in job loss. Tariffs could be charged to reduce a foreign producer's price advantage. President Trump has mentioned imposing a tariff on imports. Again, the American consumer pays a higher price because tariffs increase the cost of imports. (Read our free lesson Supply and Demand – The Costs and Benefits of Restricting Supply to learn more.)

Is there any good news?

The good news is businesses like GE, Ford, and Boeing are returning to US production. (USA, April 23, 2016). However, the factories look very different. Many of the unskilled jobs have not returned, only to be replaced by robotics. Productivity improvement is the only answer to retain production domestically while not increasing the price consumers must pay. The reality is some workers will not return to their old jobs and will need to be retrained. Part of Carrier's deal with Trump was to invest $16 million in automation. We can delay the process if we are willing to pay more for goods and services that were once provided by outsourcing – but ultimately companies will seek ways they can minimize their costs. How much more are you willing to pay?