Fewer COVID cases and a sense the economy is returning to normal brought many workers back into the workforce, while employers welcomed them. February job gains were the most since July, pushing the unemployment rate to its lowest level since the pandemic began.

The highlights from The Employment Situation – February 2022 are listed below.

COVID’s impact on the economy is lessening. Many people are returning to jobs that they felt uncomfortable with several months ago. Payrolls gained 678,000 people, and the labor force increased by 304,000. Fewer workers are working remotely because of the pandemic. Employment gains were widespread, but over 2.1 million fewer people are on payrolls than before the pandemic. Over half the remaining job losses are in the leisure and hospitality industries. The table below summarizes the total employment in different sectors in February 2020, just before the pandemic began, and in February 2022. 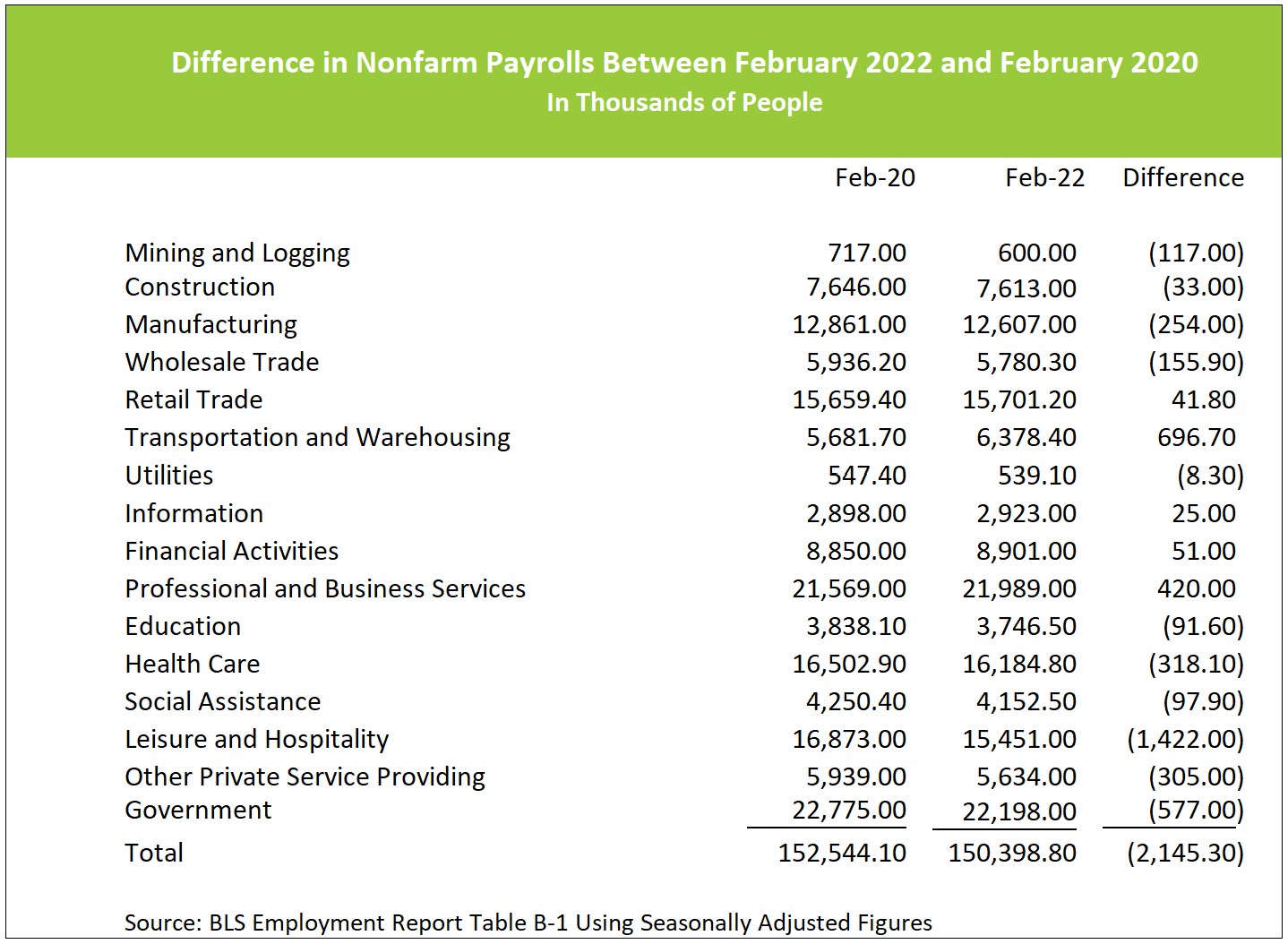 The data in the jobs report were collected in early February, so they do not reflect the economic repercussions of the Russia – Ukraine War. Companies will reduce hiring if the surge in gasoline prices, fewer exports, and growing uncertainty soften their demand for workers. The war complicates the Fed’s decision to raise rates. Jerome Powell has already indicated rates will be increased 0.25% at the Fed’s March 15-16 meeting. However, concern that higher energy costs could further inflate prices may prompt the Fed into raising rates even more. On the other hand, the uncertainty on how much the war will impact the demand for workers may suggest more caution.

The modest gain in wages was surprising, given the high demand for workers. Perhaps the tiny gain reflects the increase in the supply of workers. But this effect is short-term. For months, many economists predicted inflationary pressures would subside when workers returned to the workforce. We are not there yet. A surplus of job openings remains while the economy continues to expand. Retirements and limited immigration have reduced the pool of available workers. The economy is likely near or at the level of full employment when any increase in the economy’s aggregate demand adds inflationary pressures. But the economy’s growth and demand for workers is threatened by the Russia-Ukraine War, surging oil prices, and probable rate increases from the Federal Reserve.

The Bureau of Labor Statistics’ report Employment Summary for March will provide valuable insights into the economic impact of the war in Ukraine on employment and wages. Check back to HigherRockEducation.org shortly after its release (March 1st) for our summary and analysis. Read about inflation in our summary and analysis of The Bureau of Labor Statistics report, Consumer Price Index – February 2022, shortly after its release on March 10th.