Identifying who is unemployed, who is in the labor force, and when a person is marginally attached to the labor force is necessary to understand U-6. The US labor force includes employed and unemployed people living in the United States who are civilians over 16 years old. A person must be actively looking or have actively looked for a job within the past four weeks to be considered unemployed. Marginally attached workers include people who are available and want to work. They have not looked for a job within the prior four weeks, but they have looked for work sometime in the past twelve months. U-6 also includes part-time workers who would prefer to work full-time but cannot for economic reasons. The mathematical formula is:

U-3 is the most quoted and “official” unemployment rate. It only includes people who are actively seeking employment. Suppose Chef John is laid off during the COVID pandemic. As long as he continues to search for a job, Chef John would be counted as unemployed and included in the U-3 rate. However, Chef John would no longer be considered unemployed if he becomes discouraged and discontinues his search for four weeks. Even though Chef John wants to work, he is no longer part of the labor force because the labor force only includes those who are working plus those unemployed. In this case, Chef John would be counted in U-6, but not U-3.

Generally, U-3 and U-6 are directly related to economic growth. Businesses hire workers to meet the added demand for the goods or services they offer. The demand for workers increases wages, which entices people to enter the workforce. During contractions, businesses lay off workers, which increases the unemployment rate. However, conceivably, U-3 could decrease when the economy is in a severe recession. How? Workers would become discouraged and leave the labor force. It is also possible for U-3 to increase during an expansion. U-6 would not increase during an expansion. As the economy improves and restaurants reopen, Chef John may seek a new job and reenter the labor force. Chef John's condition would change from not being counted as unemployed to being included in the unemployed by reentering the labor force. U-3 would increase until he is hired, but U-6 would not change.

The graph below shows the relationship between U-3 and U-6 from January 2017 to March 2021. For a more recent graph, visit our latest State of The Economy blog. 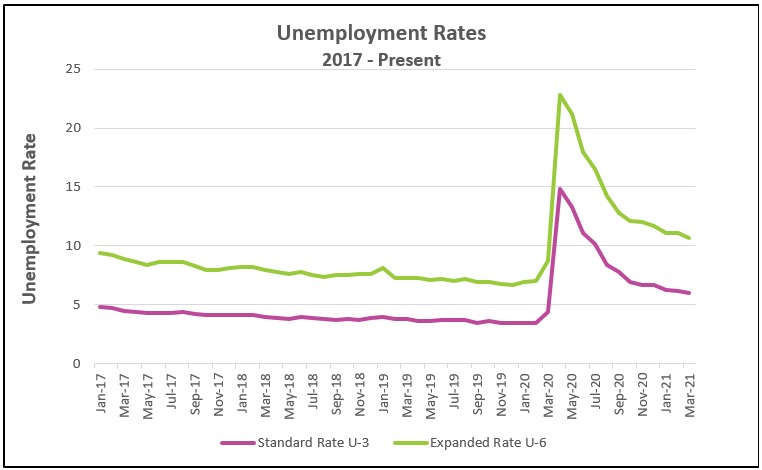 Reviewing U-3 and U-6 together provides a more accurate picture of the employment situation. If the spread between U-6 and U-3 is widening, the economy is probably worsening. U-3 may be increasing, but if U-6 is increasing faster, people have probably grown discouraged and are leaving the labor force. Such behavior would restrain U-3 while increasing U-6.

An improvement in the employment situation will narrow the spread between U-3 and U-6. Encouraging news entices formerly discouraged workers to resume their search for a job. By returning to the labor force, the BLS would change their condition from not being unemployed to unemployed and add them to U-3. U-6 would remain the same while U-3 increases, thus reducing the spread between the two unemployment measures decreases.

The table below provides a comparison between U-3 and U-6 during 2020’s COVID-19 pandemic. As COVID-19 escalated, governments tried to limit the spread of COVID by establishing containment measures to limit social interaction. Many businesses closed temporarily, and over 20 million people lost their job. Many accepted part-time jobs. Other workers became discouraged and left the workforce. As expected, U-3 and U-6 rose, and the spread between U-6 and U-3 increased from 4.34% to 8.08%. The economy was headed in the wrong direction. Between April and September, most cities lifted some of their containment measures. Discouraged workers began to seek employment. Both U-3 and U-6 decreased. The narrowing of the spread between U-3 and U-6, which fell from 8.08% to 4.98%, reflected the economy’s improvement.

In October, unemployment fell one percent. Of course, the large drop was very encouraging, but most economists believe it did not provide a clear picture of the employment situation. COVID cases continued to increase exponentially. Approximately 25% of the decrease in U-3 was attributable to people re-entering the workforce and accepting a part-time job. The number of discouraged workers also grew. A rise in the spread between U-6 and U-3 from 4.98% to 5.22% reflects the muted good news.