Thursday, January 12, 2017
Inflation has not been a policy concern since the second half of 1991, the last time the consumer price index increased more than 5 percent. It has been thirty-five years since the rate was over 10 percent. In fact, recently deflation has been more of a concern, when in 2010, prices increased less than 1 percent. The graph below is provided by the Bureau of Labor Statistics. 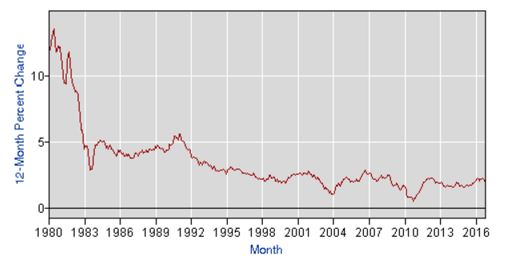 Why am I convinced inflation will become a concern? What has changed?


1) The increase in the money supply

The recipe for shortening a recession is to increase the money supply to decrease interest rates and increase lending. The Federal Reserve pumped unprecedented amounts of money into the economy during the Great Recession to keep interest rates low and stimulate bank lending. Interest rates fell to historic lows.

Central banks use the buying and selling of government securities to influence the federal funds rate or LIBOR (London Interbank Offering Rate). But what happens when these rates fall to zero? Traditional monetary tools are no longer effective. How can a central bank stimulate the economy? The answer is to purchase assets…any financial asset…and create bank reserves (money) by depositing the amount paid in a bank. These reserves are intended to shore up a bank’s balance sheet and provide them money to lend. This is precisely what the Federal Reserve did following the Financial Crisis in 2008. Between 2007 and 2014 the Federal Reserve’s assets increased from $.88 trillion to over $4 trillion. M2, a measure of the money supply has increased to over $14 trillion. See the graph from the Federal Reserve Bank of St. Louis below. 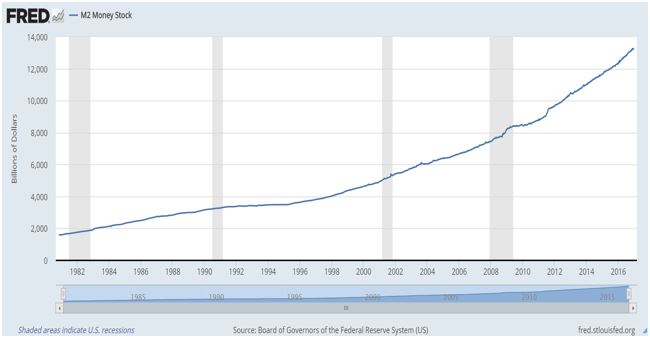 Is the formula wrong? After all we did not have inflation following the increase in the money supply. Several factors contributed to the minimal inflation. First, the velocity of money dipped to historically low levels. Consumers tend to hold onto money when they fear losing their job or troubled economic times. Second, banks did not lend as much as they could have. Loan officers became more stringent in their underwriting of loans. Businesses took fewer risks, so the demand for loans was less, even with very low rates.

As consumer confidence builds, consumers will begin to spend and businesses will seek loans. Banks will be more willing to lend. The velocity of money should increase to normal levels. If so, inflation will increase.

Demand-pull inflation results when an economy’s aggregate demand grows and outpaces increases in the aggregate supply. Growing demands for goods and services result in higher production levels. Companies stretch their capacities and hire additional workers to meet the growing demand. They find that they are able to increase their prices. Demand-pull inflation occurs when unemployment is low and companies near their capacity. Unemployment has been steadily decreasing since the Great Recession and is presently under 5 percent, a figure that most economists believe to be the full-employment level. Capacity utilization still remains at 75 percent, so it has room to grow. This is below its average of 80% between 1972 and 2015. It is showing signs of improvement since it hit 67 percent in 2009. (See Federal Reserve Industrial Production.) Demand-pull inflation should increase as the economy continues to grow and businesses near their capacity.

Low energy costs have benefited businesses and consumers and help maintain a lower price level. Growing economies increase the demand for crude oil and other commodities. Commodity prices will increase – which in turn pushes up the cost to manufacture goods using those commodities. Businesses will increase their prices to pass some of the higher cost through to their customers. Economists refer to this as cost-push inflation.

Donald Trump has proposed a 5 percent tariff on imports to help US companies and curtail imports. Restricting trade is inflationary. One reason goods are imported is because companies in other countries are more efficient at manufacturing the good or service and are able to produce, transport, and sell the good at a lower cost. This is certainly true in the television industry where many years ago, TVs were manufactured in the US. Presently, Asian companies dominate the market. Tariffs raise the cost of the import because foreign producers will raise their prices to pay for the tax. The law of demand states that the quantity demanded for these goods will decrease. Americans will substitute American made goods for those items that were imported. Furthermore, American manufacturers will be able to raise their prices since the foreign competition raised their price. The consumer loses. When purchasing an import, the consumer pays more because some of the tax has been passed through. Furthermore, when buying an American good, the buyer will pay more because the reduction in competition allows manufacturers to raise their prices. (This is illustrated by an increase in the demand for American goods.) See Supply and Demand – Who Pays an Excise Tax.

Donald Trump has also proposed taxing companies that move their production to another country. Outsourcing is a way US companies can compete. It enables them to produce a good or service at a lower cost and compete on price. Watch our video that illustrates the cost paid by consumers if trade restrictions are imposed. Fortunately, manufacturing jobs are returning to the US, but not as they were before they left. Technology is vital in enabling companies to compete rather than relying on a higher paid work force – but that is the subject of another blog…


What can prevent my prediction from coming true?

The US economy has been one of the healthiest in the world. Expansion has been held back by the troubles in the European Union and a stagnant China. The EU grew at 1.9 percent in the third quarter of 2016. This is up from its low of -5.4 percent in early 2009, but less than the 2.2 percent as recently as 2014. Most economists predict that the Union’s economy will continue to grow, albeit modestly. The European Commission projects GDP to grow at 1.6 percent. China’s growth rate has fallen from 10.6 to 6.9 percent between 2010 and 2015. The consensus among economic predictions I have read is the Chinese economy will continue to struggle to maintain a 6.9 percent level, but growth should be approximately 6.6 percent. Inflationary pressures will be directly related to the growth rates of other countries. Should growth be slower than anticipated, demand-pull inflation will be less than expected.

A strong American dollar discourages exports, while making imports less expensive. When the dollar is stronger than another country’s currency, it takes fewer dollars to purchase something manufactured in the other country. For example, assume the conversion rate is $1 to 1 Swiss franc, and a pound of Swiss cheese costs 15 Swiss francs. This means that one pound of Swiss cheese would cost the American consumer $15. (I have assumed no transaction costs.) Now assume that following the strengthening of the dollar, the conversion rate is $1 to 1.5 Swiss franc. The Swiss cheese would now cost only $10. Imports become less expensive following the strengthening of a currency. The United States has a trade deficit, meaning it imports more than it exports. Imports are less expensive when there is a strong dollar, so the inflation rate will be pulled lower by lower import prices.

Companies that rely on exports are hurt when the dollar strengthens. For example, let’s assume that $1.00 equals 1€. If an American car costs $30,000, then it will cost 30,000€. If the dollar gains strength so that one dollar can purchase 1.33€, then the same car would cost 39,900€, resulting in a drop in the quantity demanded for American cars. A stronger than expected dollar could reduce exports, slowing economic growth, which limits demand-pull inflation.

I believe that inflation will become a concern in 2017 or 2018…but I confess, I am one of the economists that were surprised inflation remained as low as it did following the enormous increase in the money supply. Now that the economy has begun to show strength, there are more reasons than before for prices to increase. It will be an interesting year.