Are US Farmers Losing Their Comparative Advantage?

Several trends have converged to hurt wheat farmers, but the bottom line is the demand is down and supply is up, resulting in an unsustainable position. Worldwide production of wheat is growing. Worldwide production is having another bumper year having reached a record 753 million metric tons. Global demand for wheat continues to increase as the population grows and the standard of living in developing countries improves. This is normally good news, but not for US farmers. Historically, agricultural produce has been one of the United States' leading exports, but the US comparative advantage has diminished and it is hurting farmers.

Last year US farmers exported 27.896 million metric tons, down from a high of 35.147 million metric tons in 2010. In 2007, the US more than doubled the exports of Canada, the next leading exporter of wheat. Since then, it has lost market share to several other nations, most notably Russia, which has climbed to the largest exporting nation. (As recently as the early 1990s the USSR was the largest importer of wheat.) This is illustrated on the graph below. 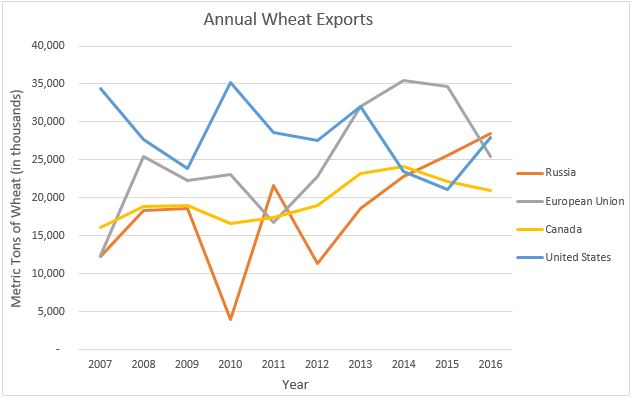 US wheat farmers depend on foreign trade. Last year, the United States exported 45% of its crop. Why has global competition hurt US farmers? As would be expected, when the supply increases, the price drops. The weighted average price per bushel reached $9.125 a bushel in July 2012. Since then it has fallen every year except 2014. The USDA projects the weighted average price will be between $3.75 and $3.85 in the current season. Today's price on the wheat futures market is $4.442.

To compound the problem for US farmers, the demand for their crop has decreased by a strengthening dollar relative to other currencies. For example, the US dollar has been much stronger than the Russian ruble. In July 2008, $100 could buy 2,300 rubles. Today $100 will buy 5,900 rubles. Low energy costs have lowered transportation costs. The Wall Street Journal recently reported that in the past year the cost to ship wheat between France and Egypt has dropped from $13.75 a ton to $7.59. Mexico has started to import wheat from Russia because the combination of a weaker ruble and historically low shipping costs enables Russia to compete with the US for Mexico's business.

Where plausible, some wheat farmers are substituting other crops or not planting anything at all. The USDA predicts farmers will plant 10% fewer acres of wheat in the winter season. However, much the same story can be told for other grains. This is particularly true for corn where corn prices have dropped even more than wheat in the past five years. In 2012, corn reached $8.40 a bushel. Yesterday it closed at $8.40. Lower energy prices have made ethanol production from corn economically less viable than when oil prices were higher, which has diminished the demand for corn.

The bottom line is that net farm income is expected to drop 8.7 percent in 2017 according to an article by Jesse Newman that was published in The Wall Street Journal on February 7, 2017. This is half of 2013's net income.

It is hard (and wrong) to wish for a natural disaster in another country, but in the short-term such a disaster could help the US farmer. A decrease in supply could push up world prices to a level that makes wheat farming once again profitable for the US farmer.

There is some good news. The consumer has benefited. Food prices have decreased 2% in the past 12 months, according to the most recent Consumer Price Index Summary issued by the Bureau of Labor Statistics. The global demand for wheat continues to grow. Longer-term improvement in the world-wide economies will eventually strengthen other currencies relative to the dollar and limit the disadvantage caused by currency differences.

To learn more about comparative advantage I suggest visiting our free lesson Comparative Advantage and Specialization.

American farmers will endure. They always have. If you are a farmer, thank you for your hard work and our prayers are with you.