Monday, October 31, 2016
What do Hilary Clinton, Donald Trump, Bernie Sanders, and the US Chamber of Commerce have in common? They all believe the US infrastructure is desperately in need of repair. Here is what they say:

The Chamber believes that allowing our nation's infrastructure to continue to deteriorate is not an option. It will cost jobs, stunt economic growth, reduce safety, and put us further behind our global competitors. US Chamber of Commerce

"Our roads and bridges are potholed and crumbling. Families endure blackouts because our electric grid fails in extreme weather. Beneath our cities, our pipeline infrastructure, our water, our sewer, you name it, is up to a century or more old. Our airports are a mess. Our ports need improvement. Our rail systems as well." Hillary Clinton

"We have a great plan and we are going to rebuild our infrastructure. By the way, her (Hillary Clinton) numbers is a fraction of what we're talking about, we need much more money than that to rebuild our infrastructure. Well I would say at least double her numbers and you're going to really need more than that. We have bridges that are falling down." Donald Trump - Fox Business

"America once led the world in building and maintaining a nationwide network of safe and reliable bridges and roads. Today, nearly a quarter of the nation's 600,000 bridges have been designated as structurally deficient of functionally obsolete. Let's rebuild our crumbling infrastructure. Let's make our country safer and more efficient. Let's put millions of American's back to work." Bernie Sanders

A country's infrastructure provides the means for people to travel, to communicate, and to live comfortably. It includes roads, bridges, electrical grids, ports, schools, phones, the internet, gas, water and sewer pipelines, railroads transport, and airports. A sufficient capacity and well-maintained infrastructure improves a country's standard of living in several ways. First, it improves a nation's safety by making it less vulnerable to accidents caused by malfunctioning infrastructure, or threats by terrorists. Second, economic efficiency is improved which generates economic growth.

Natural disasters like Hurricanes Katrina and Matthew underscored the cost in lives and property when levee or dam systems are inadequate. Katrina cost 1,863 lives and $81 billion in property damage. (To learn more visit http://hurricanekatrina.web.unc.edu/) Much of this cost was preventable if the levees in New Orleans had been sufficient. Katrina was an extraordinary storm, but less severe storms have broken levees causing the flooding of towns and farmlands. Extensive damage to crops cost farmers lost revenues and consumers higher prices.

Every four years the American Society of Civil Engineers provides a report card on the United State's infrastructure. In 2013, they gave us an average grade of D+. It recommends spending $3.6 trillion by 2020. Infrastructure Report Card

Most of us have spent several hours in congested traffic, or cringed after hitting a pot hole. Has the experience ever put you in a foul mood which contributed to saying or doing something you regretted? Has the delay prevented you from attending your child's game or spending time with your family? These are costs. Some are difficult to measure, but the cost of wasted gasoline and added maintenance can be estimated. On June 25, 2015 a Washington Post article quoted a study that estimated the annual cost of $515 per driver. Open the article to see where your state stacks up.

This does not include added cost caused by lost efficiency in transporting goods to markets. The added time and fuel cost must eventually be added into the cost of a good or service. It does not include the number of fatalities that poor roadways contribute to.

How many bridges do you cross in your daily drive? If it is 10 or more, there is a good chance that at least one of them is structurally deficient. This figure is even higher if you live in states like Pennsylvania or Oklahoma. The ARTBA reported that "there are nearly 204 million daily crossings on the 58,495 U.S. structurally deficient bridges in need of repair."

The United States exports 12.6% of its gross domestic product, and according to the World Bank, it imports 15.5% of its gross domestic product. Nearly all of our exports and imports travel through our ports. It is certain that world trade will continue to grow, yet our ports do not have the capacity to handle the increase. The graphs below were copied from the Federal Maritime Commission Bureau of Trade Analysis. The expansion of the Panama Canal requires that many ports invest millions of dollars to accommodate the larger ships that will pass through the Canal. 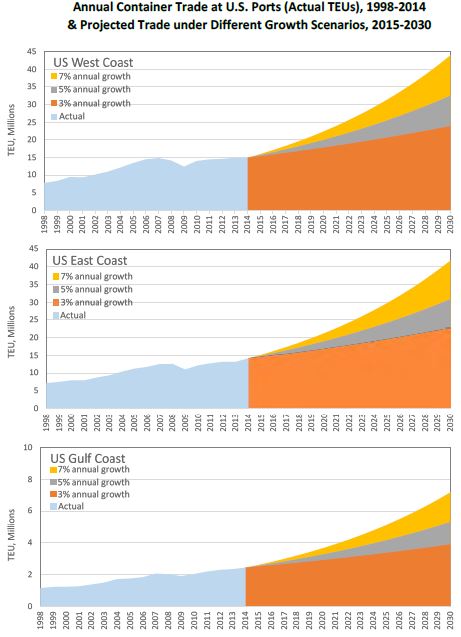 Highways, bridges, and ports are just a few of the infrastructure systems that need investment. The need for better treatment and delivery of drinking water was made clear recently when the leaders of Flint Michigan chose to save some money by bypassing its former source, Detroit Water and Sewage Department, and use the Flint River. Old pipes aggravated the problem because they contained lead, resulting in many of Flint's residents being poisoned.

To review the condition of other parts of infrastructure in the US, I suggest reading the American Society of Civil Engineer's grade book. Infrastructure Report Card

Why do these problems persist when almost everyone acknowledges there is a problem? The issue is how to finance the maintenance and improvements. Eric Morath and Ben Leubsdorf wrote an article published in The Wall Street Journal on October 26, 2016 discussing how states are cutting back on investing in their infrastructure because they are running out of money. States and local government spending is down to levels not seen since 2014, and it is impacting the local economies. Kansas is delaying new highway construction. The University of Connecticut has delayed plans to renovate the Gant Science Complex. In the BEA report released today, state and local government spending decreased 0.7% in the third quarter following a 2.5% decrease in the second quarter of 2016. Our politicians are choosing to delay these investments because the result is not immediately apparent, unless of course there is a problem.

Early next week we will continue with Part 2 of this discussion and address the importance of investing in the infrastructure and examine Hillary Clinton and Donald Trump's different proposals.

UPDATE - Since this blog was published the American Society of Civil Engineers has issued a new report card. There has been no improvement, but at least the grades have not gotten worse.