Thursday, August 18, 2016
Every four years I become spellbound by the Olympics. I love the competition. I find the personal stories about the athletes inspiring, and I enjoy learning about the host country's history and geography. Brazil's recent economic story is tragic, but hopefully it's a story our leaders and macroeconomics students will learn from. The Brazilian economic turmoil should teach us that:

Brazil was chosen to host the 2016 Summer Games in 2009. Its economy was the envy of the emerging nations. Its gross domestic product, the most common measure of economic production, had grown an average exceeding 4% annually between 2004 and 2009. (This includes a small drop in 2009, when most countries were hurt by the global financial crisis.) Inflation had decreased from the early 2000s and was relatively tame, averaging just over 5%. Countries were anxious to do business in Brazil. Fast forward to 2016, and we read about Brazil's economic hardship. Currently the economy is experiencing the worst recession it has had since the 1930s, while experiencing inflation. The rate of inflation has increased every year since 2012, but is expected to improve slightly in 2016. Unemployment is currently at its highest level since 2000, and most economists expect it to continue rising in 2016. The graphs below tell part of the story. How did this happen and what lessons can be learned? The World Bank provided figures through 2015. Estimates for 2016 were gleaned from a Wall Street Journal article published July 24, 2016 by Rogerio Jelmayer and Jeffrey Lewis. 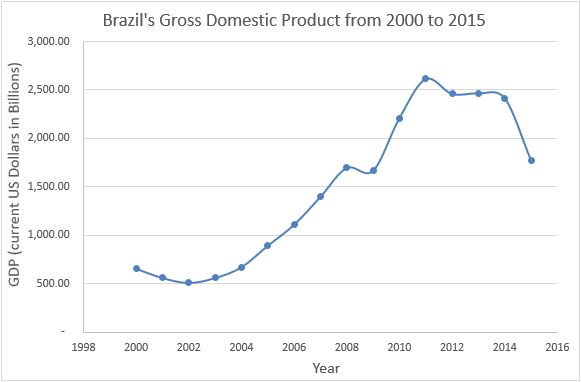 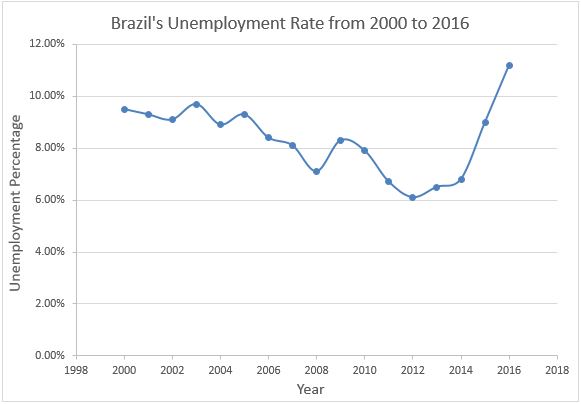 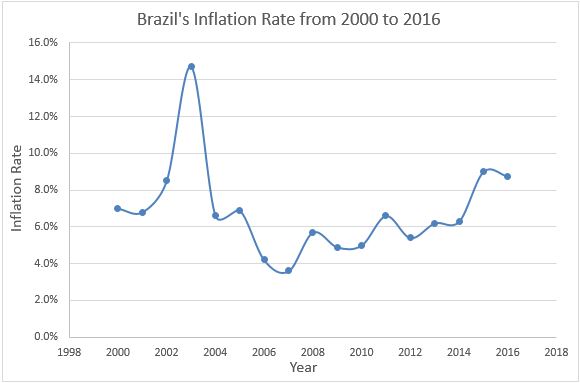 Brazil benefits when commodity prices increase. Brazil's largest company is the state run Petrobras, a developer of petroleum products. Brazil also exports ores and agricultural products. Prior to 2004, rising commodity prices and a growing Chinese economy helped bolster the economy. (China is a major importer of Brazilian commodities.) The government used the revenues to fund the development of infrastructure and grow the middle class. Many consumers, believing the prosperity would last, borrowed money to purchase homes and cars. Understandably, the new middle class wanted to accelerate their upward mobility.

Following the 2008 financial crisis, the world economy slowed. Commodity prices declined. Together these events caused a sharp decrease in exports. Between 2004 and 2010, exports made up 5.2% of GDP, but declined to 1.6% between 2011 and 2014. When commodity prices declined, government revenues decreased, but the government did not curtail spending. The deficit increased.

The financial markets were concerned Brazil could not sustain its growth. As the perceived risk increased, so did the interest rates. Brazilian leaders cut spending and increased taxes in an effort to retain its investment grade credit. Unfortunately, these austerity measures did not work. On September 9, 2015, Brazil's credit rating was downgraded to junk. Meanwhile, investment decreased. In 2011 total investment grew at 1.8% annually. Much of the decrease was in government owned businesses, where the government hoped the businesses would pick up the slack. They did not. As concern mounted, the exchange rate suffered, and the currency devalued 45% between 2011 and 2014.

Meanwhile Brazilian families were feeling the crunch and burden of added debt. In January 2005, the household debt to income ratio equaled 18%. By 2014, this ratio grew to 46%, meaning consumers no longer had the capacity to increase spending without a pay raise. Consumer spending fell. The recession was in full swing.

Political turmoil has added economic uncertainty during a time when economic leadership is desperately needed. President Luiz Inacio Lula da Silva was the author of Brazilian's economic policy that generated the prosperity between 2004 and 2011. Unfortunately, the government failed to wean itself from the debt. Revenues could not keep pace with spending. Interest rates continued to climb. Meanwhile, there is a huge corruption scandal against Petrobras which has ensnared many of Brazil's senior leaders including da Silva and Dilma Rousseff, da Silva's successor. Rousseff was chairman of Petrobras when the corruption allegedly took place. She faces an impeachment trial and has been temporarily replaced by Michael Temer. The resulting uncertainty in Brazil's leadership has deterred investors as well.

The United States does not share Brazil's financial difficulties. However, our debt and deficit continue to climb and now exceeds 100% of GDP. Standard and Poor's downgraded the US credit rating from AAA to AA+ on August 5, 2011 during the political battle over the credit limit. While I do not want to imply we are headed on the same path as Brazil in the near future, I do believe we need to heed Brazil's lesson. We need strong leadership that shows courage and has integrity. We need leadership willing to take on these troubling trends.

Recommended articles used in this blog include:

Aggregate Demand and the Slowdown in the Brazilian Economic Growth from 2011 – 2014 by Franklin Serrano and Ricardo Summa.

Source for data in graphs: