The International Trade Administration reported that the United States imported 27 million metric tons of steel in 2017. Canada, Brazil, South Korea, and Mexico furnished nearly half. In 2017 the steel trade deficit was 19.3 million metric tons. President Trump recently proposed a 25% tariff on steel and a 10% tariff on aluminum. The objective is to protect American jobs, by increasing production domestically. Most economists recommend the opposite. Here is why.

A tariff is a tax on imported goods. It is a protective measure imposed by governments to restrict trade and protect domestic employees and companies. Foreign goods are still imported, but because of the tariff, fewer are sold. Tariffs increase the price of imported goods, reducing the quantity demanded of the imported good. Instead, consumers purchase more domestically produced substitutes. The employees and producers benefit – at the expense of the consumer.

The impact of the tariff would be felt in many sectors.

Supply and demand analysis illustrates who benefits and who pays for a tariff. In our lesson Supply and Demand – The Costs and Benefits of Restricting Supply we use the shoe industry to illustrate the impact of a tariff. The same analysis is applicable with steel or aluminum. 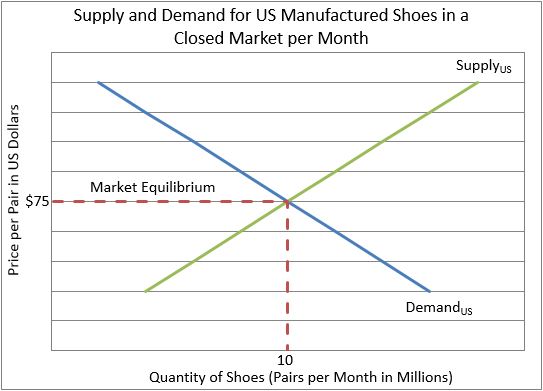 The price would be $75 and 10 million pairs of shoes would be sold each month. All the shoes would be produced by US companies. Assume free trade is permitted, and the world equilibrium price for shoes is $35 per pair. Shoe retailers are permitted to import shoes and US producers are allowed to export shoes. The resulting supply and demand for the US market and American producers is illustrated below. At $35 Americans would demand 26 million pairs of shoes, of which 24 million would be imported. US manufacturers would only provide 2 million pairs. The American consumer wins by paying less per pair of shoes and purchasing more shoes.

This is less obvious with steel and aluminum because they are intermediate goods, meaning they are inputs used to manufacture other products such as cars, aluminum cans, and equipment. A manufacturer’s cost influences the price of the good it sells. If its cost to produce is lower, it will reduce its price. The US consumer benefits from lower prices on everything using steel or aluminum when steel or aluminum is imported at a lower cost. 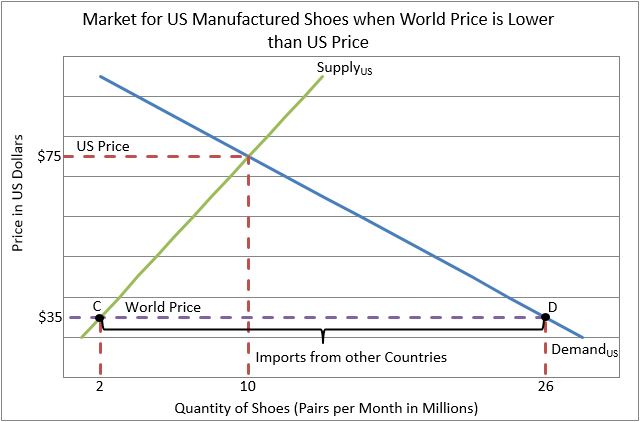 Workers lose jobs, and the economies of communities which had the manufacturing plants suffer. Companies, unions, and laid off workers lobby Congress to protect their jobs. Assume Congress complies with a $10 tariff per pair of shoes. The expected results are an increase in American jobs, but also an increase in the price of a pair of shoes as shown on the graph below. 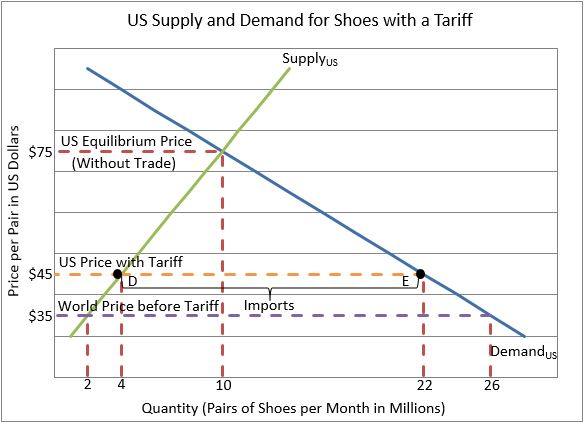 The tariff is passed through to consumers and the price jumps to $45. At $45 a pair, US producers increase production to four million pairs of shoes a month. Some workers are rehired, but consumers now pay $45 for a pair shoes. Is paying an additional $10 per pair of shoes worth saving a few jobs?

The objective of the steel and aluminum tariff is to save American jobs. Tariffs may generate a higher demand for US produced steel, but companies will continue to use the most efficient technology. Bloomberg published an article about Voestalpine AG in Austria. The plant manufactures 500,000 metric tons a year. In the 1960s, the mill would have employed 1,000 workers, but with improved technology, the plant is now served by 14. Wolfgang Eder, its CEO, is quoted in the article, “We have to forget steel as a core employer. In the long run we will lose most of the classic blue-collar workers, people doing the hot and dirty jobs in coking plants or around blast furnaces. This will be automated.” Most plants are not as automated as Voestalpine, but technology has improved productivity, reducing the number of workers per metric ton from 700 to 250. Technologies have improved so much that it is likely more jobs would be lost in the impacted industries than in the steel or aluminum industry.

Companies selling goods that use aluminum or steel will increase their prices. The law of demand states that there is an indirect relationship between the quantity demanded and the price of a good or service. When fewer items are purchased, production of these items will be cut, which means jobs will be lost. The Trade Partnership predicts the tariff would result in a net loss of 146,000 jobs.

House Speaker Ryan, Senator Orrin Hatch, and many others are concerned a tariff could lead to a trade war. The Wall Street Journal reported on Monday that the EU has threatened to respond.

President Trump responded by saying the US could slap a tariff on European cars. Which gets us back to the same question….How much more are you willing to pay for that new car to save some jobs in the steel and aluminum industries, when it will also cost American jobs in other industries?

We hope this helps students understand the economics behind a tariff. Please consider sharing this with any econ students or teachers you know. Thank you.