2020 has been an extraordinary year for the US economy. Failure to contain COVID-19 caused a record 31.4% contraction in the second quarter, followed by the largest recorded recovery of 34.4% in the third quarter. Unemployment began in 2020 at 3.5%, a historical low, but soon peaked at 14.8%, the highest level since the Great Depression. Nearly seven million people were laid off in one week, the week ending March 28th. Many have since returned to work, but at years-end nearly 10 million fewer people were employed than before the pandemic.

Household incomes increased, mainly because Congress provided $5 trillion in aid. Government spending prevented even greater hardship. Yet there is a price – government spending doubled, and the budget deficit tripled in 2020. Through it all, the stock markets rose to record levels.

Higher Rock Education’s 2020 predictions proved too optimistic, but we did not anticipate COVID-19. We provide our scorecard and 2021 forecasts in the summary section, but first, four key reports published in December and early January are summarized.

According to the Bureau of Economic Analysis’s third estimate, the US economy rebounded in record fashion during the third quarter. Readers can access the full report Gross Domestic Product, Third Quarter 2020, Third Estimate. The BEA will release its advance estimate for the fourth quarter on January 28th.

In November, income and consumer spending fell for the first time since March. Wages and salaries had increased every month since April but remained below pre-pandemic levels. However, many businesses and families remain very dependent on government assistance, which decreased by more than $100 billion between November and October. Businesses were impacted by a reduction in the Paycheck Protection Program. Households received less in lost wages and supplemental payments. Even after considering November’s decrease, household income was $377 billion more in November than in February because of the $3 trillion support from the CARES Act and other government assistance programs paid between March and November.

The increase in household income had sustained consumer spending until November. But, rising COVID-19 cases and smaller income deterred households from spending. Unlike prior months spending for services dropped less than for durable goods and nondurable goods, reflecting the reopening of many restaurants and bars in November (many of which closed again in December). Read the full report Personal Income and Outlays – November 2020. The highlights are listed below. 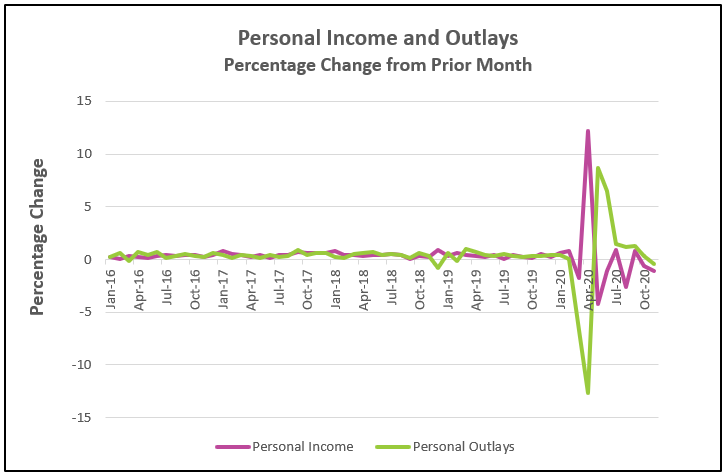 The inflation news is mixed. The CPI-U, which covers all items, is gaining strength. Since October, prices have increased at an accelerated rate, but the core index, which excludes energy and food prices, fell in December. Higher gasoline prices contributed the most to December’s CPI-U. Emerging from the pandemic has increased the demand for many goods and services and contributed to modest inflation. Read the full report Consumer Price Index – December 2020. The highlights of the report are listed below. 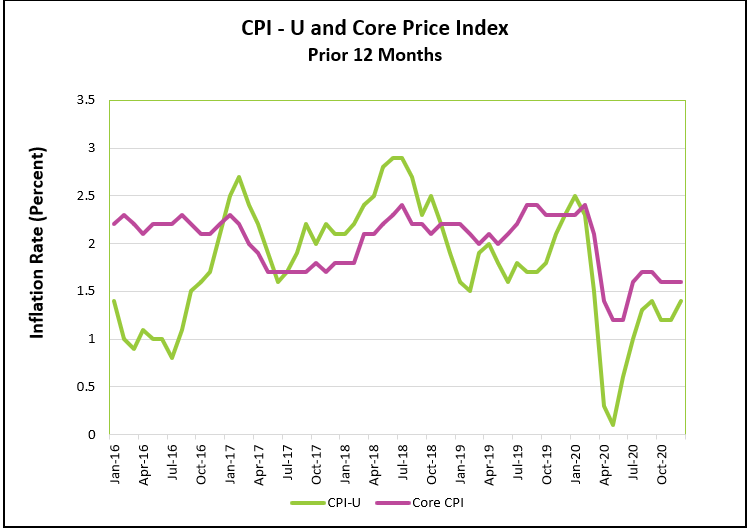 The jobless rate was unchanged in December, but more people were cut from payrolls because a surge in COVID-19 cases forced many communities to reestablish containment measures for restaurants, bars, and hotels. These industries lost 498,000 jobs. State and local governments cut workers as they continued their struggles in balancing their budgets following a drop in tax revenues and increased expenses. Fortunately, industries with less personal contact continued to add jobs, reducing the net loss to 140,000 people. The highlights from The Employment Situation – December 2020. are listed below. 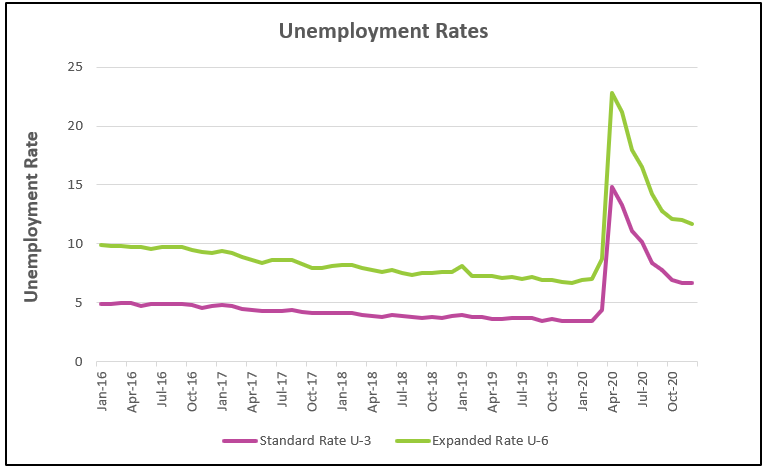 COVID-19 was 2020’s most important story and will continue to be so for as long as the number of cases continues to rise.

The failure to contain COVID-19 has prolonged the economy’s recovery and will determine 2021’s direction. Higher Rock Education’s 2021 predictions assume COVID-19’s influence continues in the first quarter. Vaccinations of most of the general population will boost public confidence and spur renewed economic activity in the second half of 2021. The vaccinations are also successful at deterring the spread of the most recent mutated COVID strain. Continued fiscal stimulus under the Biden administration and the new Congress has been assumed for our 2021 predictions. 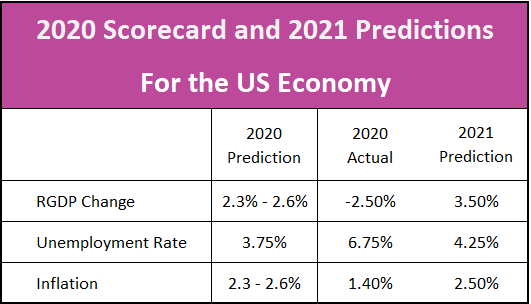 The US economy contracted approximately 2% in 2020 but increased at a record clip in the third quarter. Most economists expect little or no growth in the fourth quarter. (The BEA will release its advance estimate of growth in the fourth quarter on January 28th.) Growth will be modest in the first half of 2021. Household income has decreased in four of the past seven months, but it remains higher than before the pandemic because of the $3 trillion government assistance payments in March. Higher incomes helped sustain consumer spending until December when it fell for the first time since April. A sustainable recovery depends on growth in consumer spending. The recent $600 checks and additional fiscal stimuli will bolster consumer spending into 2021. President-elect Joe Biden and the new Congress are likely to increase the stimuli further.

Service industries will continue to struggle because people will remain reticent about dining out and traveling. Households have money to spend when the pandemic ends. Rising incomes and being constrained have combined to increase savings. Americans have over $2 trillion in savings, nearly double the amount they had when the pandemic began, according to the Federal Reserve (FRED Personal Savings). Vaccinations will release a pent-up demand. People will venture out, resulting in a sustained increase in leisure activities and the revival of service industries. Americans will celebrate the end of the pandemic and spend some of their savings! Higher Rock Education predicts the US economy will grow 3.5% in 2021, but by the end of the year, the economy will be booming at an annual rate of 5%.

The US economy lost 9.4 million jobs in 2020, and at the end of the year, five million more people were unemployed than in February, when the pandemic began. Payrolls shrunk in December for the first time since March. But the cuts were limited to service industries, which continue to suffer the most from pandemic-related shutdowns. Companies in industries less impacted by COVID-19 hired, including manufacturing, retail, professional and business services, and construction. Many businesses had trouble finding employees. Why? Because the pandemic prevented approximately 4.6 million people from looking for a job. They had to remain home with a child who could not attend school or daycare or feared getting sick.

Fortunately, the employment situation will improve in 2021, mainly because service workers will return to their jobs. Schools and daycares will reopen so that many workers will return to work. Yet, many of the long-term unemployed will remain unemployed. Over 100,000 businesses have closed permanently. (Bloomberg reported that included 100,000 restaurants.) It will take time to replace those businesses. In December, 15.8 million people reported that they lost their jobs or worked fewer hours because their employer closed or cut back.

Fiscal and monetary policies will remain accommodative during the first half of 2021. Expect additional stimulus checks and continued supplemental unemployment insurance. Congress will also add measures to assist states who suffered a drop in tax revenues while dealing with escalating costs associated with health care. The Federal Reserve has repeatedly reported that it will maintain interest rates near zero until unemployment returns to acceptable levels. Many businesses will take advantage of the lower rates by investing in expanding operations, anticipating a rebound. However, fiscal policy will become less accommodative as 2021 progresses. Congress will grapple with the unsustainable growth in the budget deficit once the economy recovers. The impact of these measures will be felt immediately in the stock markets, but they will not slow the pace of growth until the second quarter of 2022.

The health care community and scientists have done their part by developing a vaccine, which will save lives and shorten the pandemic-driven recession. As more people are vaccinated, a pent-up demand will be released. People will celebrate and begin to travel, visit their friends and family, dine at their favorite restaurants, attend movies, and other events. Workers will return to their offices. Employment will increase. As mentioned above, by 2021’s third quarter, the US economy will be booming!