2018 was a very prosperous year for most people living and working in the United States. Economic growth after adjusting for inflation accelerated in 2018, rising 2.9% from 2.7% in 2017. More people were added to payrolls (2.6 million) than in any year since 2015. Unemployment dropped to some of the lowest rates in 50 years. Wages increased more than inflation, meaning workers were better off. All of this despite being late into a business cycle, slowing global economies, a partial government shutdown, and difficult trade negotiations with China. What contributed to this remarkable prosperity? Will it continue into 2019?

The BEA released its “initial estimate” for 2018's fourth quarter on February 28th. This estimate replaces the advance estimate normally published at the end of January but was delayed because of the partial government shutdown.

The partial government shutdown in January delayed the publication of BEA’s December Personal Income and Outlays report until March 1st. The published report included December and January's income figures, but only December's outlays. Here are the highlights.

The consumer price index continues to remain relatively low, largely because gasoline prices have decreased in three of the past four months. The Bureau of Labor Statistics published Consumer Price Index - January 2019 on February 13th. Here are the highlights. 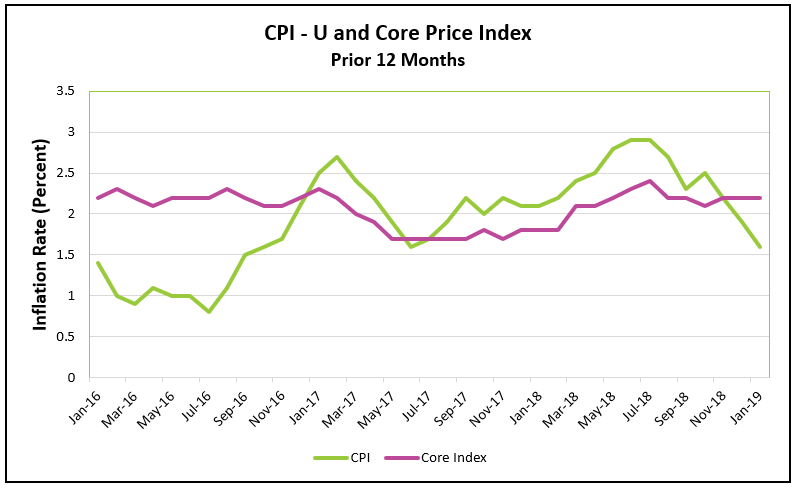 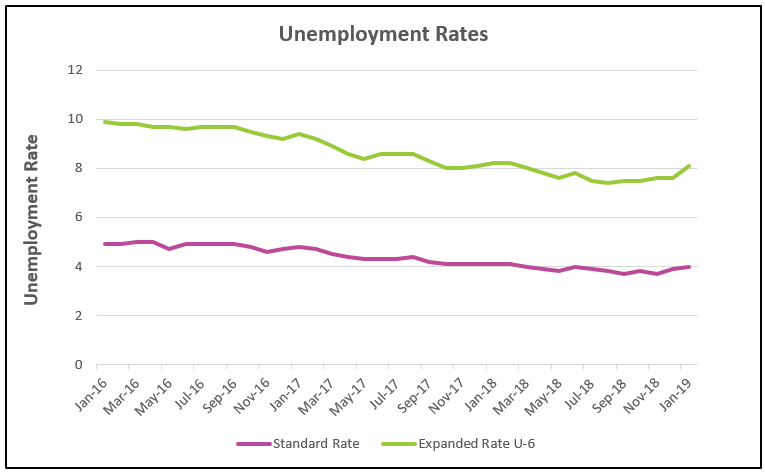 The pace of economic growth accelerated in 2018. Expansionary fiscal policy fueled much of the growth. No doubt, the tax cut early in 2018 increased consumer disposable income – which helped propel consumer spending 2.6% higher. Businesses spent some of their tax savings on equipment, and improved manufacturing productivity 0.6% according to a recent release by the Bureau of Labor Statistics. Federal spending rose 2.6%, but the growth in spending was not matched by enough of an increase in tax revenues to pay for the added government spending. The budget deficit grew 17% to $779 billion in fiscal year 2018.

Early indicators are that economic growth in 2019 will not be as robust as 2018, but the economy is expected to continue growing beyond July when it will reach the longest economic expansion recorded. I believe the tax cuts will continue to stimulate growth, but not as much as in 2018. Federal Reserve Chairman, Jerome Powell hinted in recent statements that he expects the economy's pace to slow and that is one of the reasons for pausing until the economic data substantiate continuing to raise interest rates. Higher rates slow economic growth during periods when inflation is a concern, and inflation has remained near or below the Federal Open Market Committee's target of 2%. Personal consumption expenditures (consumer spending) comprises approximately two-thirds of economic activity and remains strong. PCE grew at a healthy rate of 2.8% in the fourth quarter, which is down from the unusually high pace of 3.5% in the third quarter, but still higher than the average for 2018.

The partial government shutdown slowed the release of first quarter statistics, so it is difficult to gauge the economy in January. Even with reliable figures it is hard to put much weight on them because of the partial shutdown. For example, unemployment increased to 4%. Clearly the increase was partly because of the government shutdown. I believe the fact that 304,000 workers were added to payrolls is more telling.

Trade will remain a hot topic in 2019. The US trade deficit continues to grow as US consumers import more than businesses export. In 2018, imports increased 12.5%, while exports only increased 6.3%. Recently the trend has worsened as exports fell 1.9% and imports increased 2.1% in December according to a BEA report released yesterday. (BEA USA Trade in Goods and Services) The trade deficit has increased 16% since President Trump took office. A stronger dollar, fueled by the higher interest rates, also helped increase the trade deficit. Favorable trade agreements would help, but strength in world economies is more important in generating economic growth. Presently, eight of the ten US largest trading partners are experiencing slower growth.

The consumer price index (CPI) was unchanged in January, largely because gas prices dropped 5.5%. A strong dollar has also helped tame inflation by reducing the price of imports. The core price index increased 0.2% in January and 2.2% over the prior 12 months. Core indexes are viewed by economists as more reliable measures of inflationary trends because they exclude volatile energy and food prices. Policy makers at the Federal Reserve prefer the PCE core price index. Unfortunately, the January figures were not included in the BEA’s report released March 1st, but the PCE price index increased 1.7% in 2018, while the core index increased 1.9%. Both are below the Federal Reserve’s target of 2.0%.

How long will this expansion last? After all, economies are cyclical, and a downturn is coming. While the US economy remains healthy, many of the economy's vital statistics including economic growth, unemployment, and consumer spending worsened in recent reports. The longest government shutdown and continuing trade disputes will impact the first quarter of 2019. Finally, the US economy remains tied to world economies and at some point, if the major world economies continue to struggle, the US economy would be impacted, even if trade disputes are resolved. A recession is not imminent, but very few economists expect the economy to prosper as much in 2019 as it did in 2018.