The coronavirus had not dramatically impacted the US economy when most of the February figures were released. In the summary and analysis section below I will focus on the expected economic impact of the virus, but first it is important to review the health of the economy before the virus spread to six continents. In early February all signs pointed toward continued prosperity in the United States. Once again, the jobs report was encouraging. Unemployment returned to its 50-year low. Wage increases outpaced inflation. Consumer spending decreased but remained strong enough to prolong the record expansion. Manufacturing continued to struggle, but new trade agreements provided hope that it would recover. Employment in the manufacturing sector began to increase. Inflation indexes remained below the Federal Reserve’s target but were beginning to show some signs of increasing.

The Dow Jones Industrial Average closed at record highs on five days in January. It went on to reach new peaks in early February before beginning its collapse in late February as the coronavirus spread.

Economic growth was unchanged at 2.1% in the fourth quarter, according to the second estimate released by the Bureau of Economic Analysis (BEA) on February 27. Price indexes were revised downward. Consumer and government spending continued to be large contributors to the RGDP’s increase. Net exports also increased, but more because imports fell than because exports increased. Manufacturing remained weak. The report’s highlights are listed below. Readers can access the report at the Gross Domestic Product, Fourth Quarter 2019, (Second Estimate).

Personal income gains have helped support continued growth in consumer spending, by gaining more in January than in any month since December 2018. Continued strength in these figures are essential if the economy is to maintain its strength. Income fuels consumer spending or personal consumption expenditures (PCE), and consumer spending accounts for approximately 66% of economic activity in the United States. (Read our lesson Gross Domestic Product – Measuring an Economy’s Performance to learn more about the importance of PCE.) Inflation as measured by the PCE – price  index, continues to increase when measured over the prior twelve months. Price increases remain less than the Federal Reserve’s 2.0% target. Read the Commerce Department’s full report by following the link Personal Income and Outlays, January 2020. The highlights are listed below. 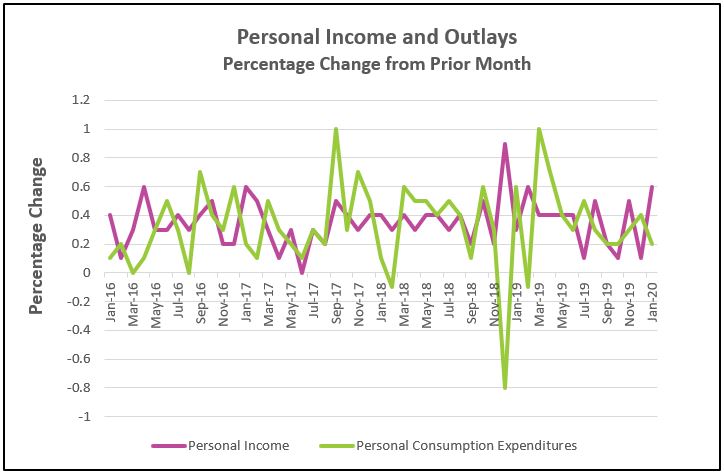 Price increases are gaining momentum but continue to be modest. Lower gasoline prices helped restrain prices. Meanwhile, food prices increased more than any month since May 2014. Housing prices continue to increase, which helped push up the core price index for the month. Read the full report by visiting Consumer Price Index – February 2020. Here are the highlights of the Bureau of Labor Statistics (BLS) report. 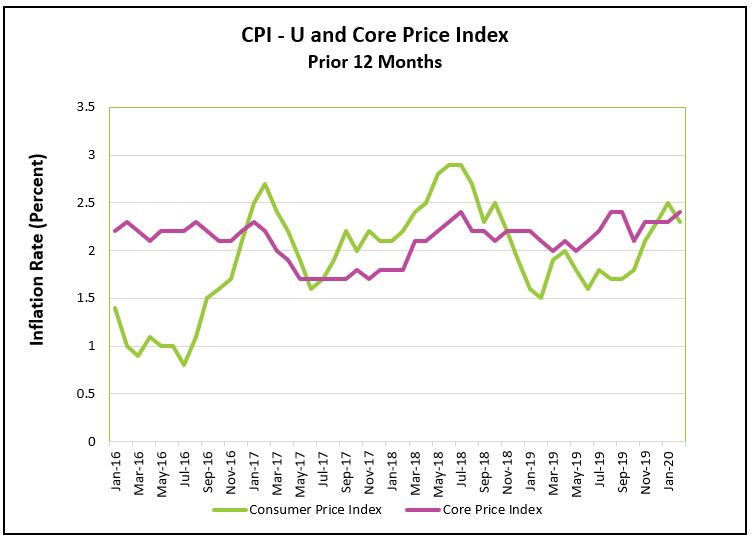 Employment in February remained healthy according to this month’s Bureau of Labor Statistics's report, The Employment Situation – February 2020. Unfortunately, the data precedes the impact of the coronavirus because the monthly surveys were taken in the middle of February. Most economists are concerned the virus will slow hiring. Highlights from February’s report are listed below. 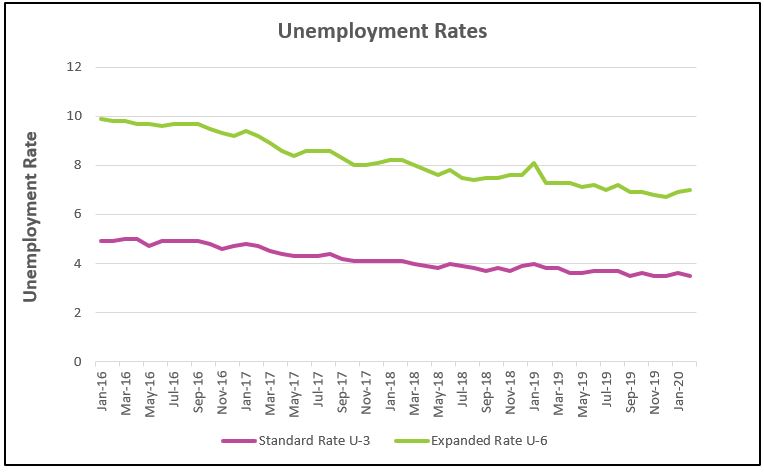 Oh, how I wish I had tomorrow’s Wall Street Journal today! Will the onslaught of the coronavirus end the longest expansion (113 months) of the US economy? A long bull market turned into a bear market when the Dow Jones Industrial Average fell 20% from its peak last week. Most of us have been shocked by the seemingly never-ending news of closures, cancellations, and postponements. Broadway, Disney, and many retail establishments are closed until further notice. The NCAA announced that its men’s and women’s basketball tournaments have been cancelled. The NBA, NHL and MLB have all postponed games. Health officials have encouraged its citizens to curtail travel. All of these will impact consumer spending. For some companies, the loss will be permanent such as for the hotels, restaurants, and airlines that planned to serve the basketball fans attending the NCAA tournament. For other companies, a sale may be delayed. For example, many consumers may delay purchasing an iPhone if supply chain interruptions prevent them from buying a phone this month. There is little doubt that consumer spending will slow in March. GDP will probably fall. But a recession is marked by slower growth in two successive quarters, which means either the coronavirus would need to continue to threaten the population into the summer, or it would cause such a drop in employment and output that the economy would fail to recover sufficiently. Whether or not the US economy enters a recession depends on how long and how much consumers curtail their spending.

The large decrease in the stock markets may discourage consumer spending. Economists refer to this as the wealth effect. The theory is that consumers spend more when the value of their assets rise and less when they fall. A sharp drop in the stock markets has made many consumers feel more financially insecure and less confident about their financial health so larger purchases are delayed.

The University of Michigan’s Index of Consumer Sentiment fell in early March largely because of the coronavirus pandemic and falling stock prices. Fortunately, the survey concluded the decline was not as great as following the Great Recession because consumers regard the coronavirus setback as temporary. However, a significant drop in consumer sentiment usually indicates that consumers are growing more cautious and they will spend less while saving more.

Businesses may lack the cash they need to operate. Many small businesses retain less than a thirty-day cash reserve. They may not have access to bank loans, especially in times of financial stress. Many businesses will fail, leaving many jobless. Layoffs in industries that serve large gatherings will be common. These include employees of convention centers, cruise ships, airlines, event planners, casinos, and many others. Smaller oil producers are especially vulnerable because they are also trying to survive a recent price war between Saudi Arabia and Russia.

Other businesses are being impacted by supply chain interruptions. Most manufacturers hold less in inventory than 20 years ago. They depend on suppliers to provide prompt delivery. But production can stall if their suppliers temporarily closed because of the coronavirus.

Businesses are in a survival mode – which will probably delay any rebound that had been expected from the easing of trade tensions. Hiring will probably be minimal in all industries except those related to alleviating the pandemic.

So what should be done? Most importantly, all of us can follow the recommendations of the health experts and practice social distancing, wash our hands and limit our social activities. Slowing the coronavirus’s spread will lessen the economic harm more than anything else. Central banks have lowered rates and added liquidity to the markets. The Federal Reserve cut its target federal funds rate to between 0.0% and 0.25%. Its objective was to assure the financial markets by providing additional liquidity.

I doubt lower rates will provide much of an incentive for consumers and businesses to increase spending. Low rates cannot improve supply chain problems, nor can they make nervous consumers dine out, or travel. A family is probably not more likely to purchase a car if it fears a member will lose his or her job. But more lenient lending guidelines can help businesses desperately needing cash to fund ongoing operations.

Most economists believe immediate fiscal measures are more urgent than monetary action. First, to deter the spread of the virus, workers must remain home if they are infected. Providing assurances that workers would continue to be paid would discourage them from going to work when they are sick. President Donald Trump has considered reducing payroll taxes. Reducing payroll taxes would not deter a sick person from going to work, but lower taxes could help cash strapped businesses. Higher disposable incomes could also spur consumers to spend more.

The coronavirus will adversely impact almost every part of the economy including, employment, consumer spending, and production. Whether or not the economy enters a recession depends on the severity of the emergency. Watch the job market. Americans will slow their spending in the immediate future. Companies could choose to lay off workers. If they start laying off workers, spending will decrease. Aggregate demand will fall, and additional layoffs could ensue if businesses believe the slowdown is longer term. Or companies may retain their workers because management believes the downturn is short-term and workers have recently been hard to find. In this case, the rebound should be quick, and a recession is less likely. I believe a recession is likely. But, my hope is that the economy’s path forward will be comparable to a recovery following a natural disaster, where immediately following the disaster there is a slowdown in the local economy, but the sluggishness does not feed on itself. Instead, the economy quickly recovers when companies work to rebuild, or in the case of the coronavirus, companies build to meet the pent-up demand. March's economic reports will be revealing.