All signs point toward continued prosperity in the United States. Once again, the jobs report was encouraging. People continued to enter the labor force, so much so that the unemployment rate ticked up from 3.5% to 3.6%. Wage increases outpaced inflation. However, consumer spending fell in December and for the year. Manufacturing continues to struggle. The lack of business investment remains a concern, but hopefully the new trade agreement with China and a revised North American Trade Agreement will generate an increase in exports and reduce the uncertainty that has discouraged businesses from investing.

The stock market reached new highs, but recently has pulled back because investors are concerned the coronavirus outbreak will adversely impact the Chinese economy, which could have repercussions worldwide.

Inflation remains below the Federal Reserve’s target but has shown some signs of increasing.

Economic growth remained at 2.1% in the fourth quarter, according to the advance estimate released by the BEA on January 30th. Consumer and government spending continued to be large contributors. Net exports also increased, but more because imports fell than because exports increased. Manufacturing remained weak. The report’s highlights are listed below. Readers can access the report at the Gross Domestic Product, Fourth Quarter 2019, Advance Estimate.

Growth in income and consumer spending was less in December than November. Continued strength in these figures is essential if the economy is to maintain its vigor. Income fuels consumer spending or personal consumption expenditures (PCE), and consumer spending accounts for approximately 66% of economic activity in the United States. (Read our lesson Gross Domestic Product – Measuring an Economy’s Performance to learn more about the importance of PCE.) Inflation remained below the Federal Reserve’s 2.0% target. The Commerce Department released its report Personal Income and Outlays, December 2019. The highlights are listed below. 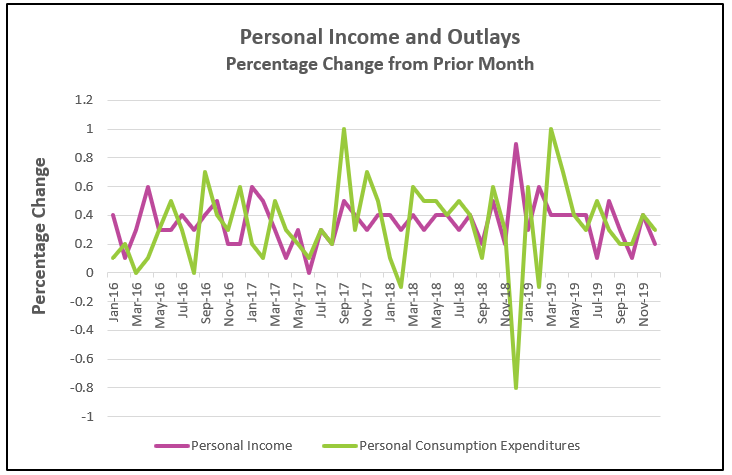 Price increases gained some momentum for the year, but the increases continue to be modest. In January the CPI fell from 0.2% in December to 0.1%, largely because of lower gasoline prices. Housing prices continue to increase, which helped push up the core price index for the month. Read the full report by visiting Consumer Price Index – January 2020. Here are the highlights of the BLS’s report. 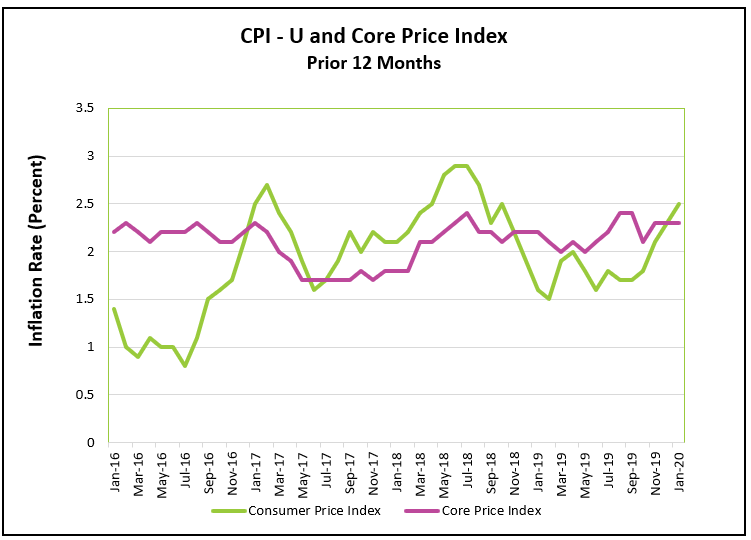 Employment in January remained healthy according to this month’s Bureau of Labor Statistics report, The Employment Situation – January 2020. Unemployment increased, but for a good reason – more people have entered the workforce. The report’s highlights are listed below. 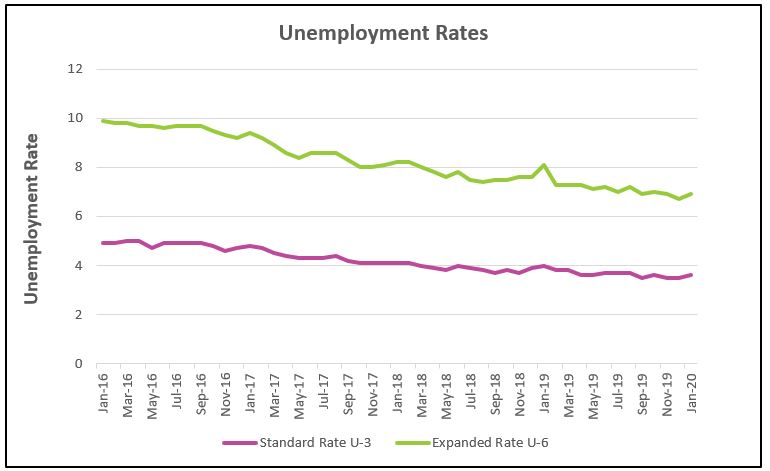 The US economy continues its longest recorded expansion at a slower but steady growth rate of approximately 2.0%. The number of people employed has increased for a record 112 months. The demand for workers is fueled by moderate increases in income and consumer spending. 12,000 jobs were cut in manufacturing last month. Only the manufacturing sector has suffered. Business investment has fallen for three straight quarters. A weak global economy and trade wars have created business uncertainty, causing delays in capital investment. Fortunately, low interest rates, a healthy equities market and a growing economy facilitate capital investment so the recent passing of the revised North American Trade Agreement and Phase 1 of a trade agreement with China should reduce the uncertainty and prompt businesses to invest more. (Listen to the NPR story to learn more about the trade agreement with China.) If so, RGDP will increase, while improving productivity. 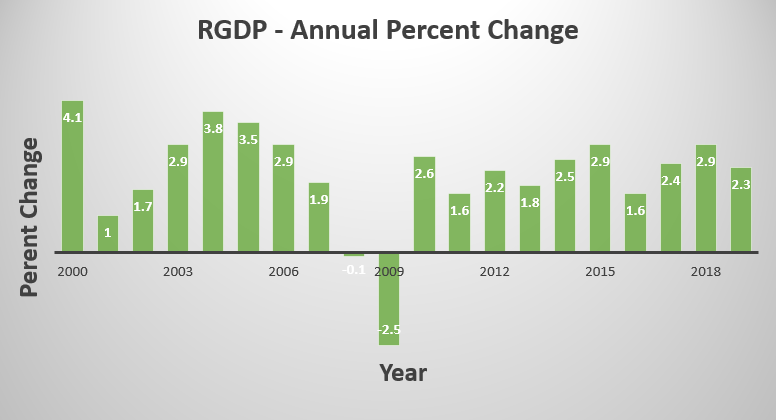 The unemployment rate increased, but for a good reason. Jobs are available and people are being hired. 225,000 people found jobs. More people are entering the labor force and since the unemployment rate is determined by the number unemployed who are looking for work, the rate went up because many who had been discouraged are now entering the job market. This partially explains why wages have not increased more than they have. Businesses complain that good help is hard to find. Yet, growth in wages have barely kept pace with inflation. Fortunately, workers at the lower end of the pay scale have had larger increases in pay (on a percentage basis). Another explanation for the small increase in wages is that the US economy is a service economy, and service industries tend to pay less than the manufacturing sector. Meanwhile manufacturing has seen a reduction in workers. Many retiring baby-boomers are being replaced by younger workers, who are also paid less. To fuel continued growth, incomes must continue to increase.

Troubles related to Boeing’s 737 Max will continue to hamper the recovery of the manufacturing sector. Boeing suspended construction of new 737 Maxes in December. The repercussions will reduce GDP by between 0.3 and 0.5% in the first quarter. Boeing is the largest manufacturer exporter in the United States and the 737 Max is its largest product. It contracts with 600 suppliers. Thousands of workers have either been furloughed or lost their jobs. Airlines have been forced to adjust routing and even cancel flights.

The impact of the coronavirus is unknown. Wall Street immediately responded negatively because the virus could potentially have a substantial impact on the US economy if the virus continues to spread. In China, economic growth may slow from 6% to 4%. Many companies are closed until the spread subsides. The impact will ripple throughout the global economy – how much and long-lasting depends upon the severity of the emergency.