An economic recovery depends on containing the spread of COVID-19. The US economy was headed in the right direction in June. Employment was up. Consumer spending increased. Much of the good news was driven by government actions. States reopened their economies and millions of furloughed workers were rehired. Government transfer payments earlier in the quarter helped propel April’s income to record increases, which in turn contributed to a rise in May’s consumer spending. But, for continued improvements to be sustainable, more people need to return to work and public confidence needs to be restored.

Unfortunately, the number of COVID-19 cases has increased since states have reopened. Consumer sentiment fell in late June. The uptick in cases have forced some states to re-impose restrictions. Many businesses that opened in June will close again in July. People are being furloughed for a second time, just when the enhanced unemployment insurance benefits expire. School districts are debating on when, if and how students can return to the classroom this year.

Some economists predict that July’s figures will worsen. June’s surveys were from the middle of June when states had just started the reopening process. Most believed the economy would rebound sharply in the third quarter. Now many believe the recession will continue into next year. Dr. Bachman of Deloitte predicts the real gross domestic product (RGDP) will contract 4.5% in 2021.

The current recession was medically induced, and the economy will not return to normalcy before either a cure, vaccine, or effective social distancing is established. The public must gain confidence that they are safe to venture out. But humans are social animals and do not like to be cooped up for long periods. We are beginning to discover new ways to be around people and partake in activities while social distancing. Golf courses are enjoying an increase in play. Sales of recreational vehicles, boat, and bicycles have increased sharply. If you or your family have benefited in any way economically from this period, we would like to anonymously share your story with our readers. Please email you story to info@higherrockeducation.com.

The most important components of RGDP fell in the first quarter, which resulted in the US economy entering a recession and ending its longest recorded expansion. RGDP is the total of personal consumption expenditures (PCE), business investment, government spending, and net exports. Personal consumption expenditures (PCE), frequently referred to as consumer spending, is the most important variable because it accounts for approximately 66% of the US economy. PCE and business investments fell sharply, while government spending increased slightly. Net exports, which is the difference between exports and imports, increased, but for bad reasons. Exports fell 9%, but imports fell more (15.7%), so the net exports increased even though exports fell. Readers can access the Bureau of Economic Analysis's report at the Gross Domestic Product, First Quarter 2020, Third Estimate. (Note this report only includes the economic slump in the last few weeks of the first quarter. Next quarter’s RGDP report, scheduled to be released in August, will confirm the largest quarterly contraction ever recorded.)

Personal income fell in May after increasing sharply in April. April’s increase largely resulted from Economic Impact Payments, which were one-time government transfer payments to assist households that were part of the Coronavirus Aid, Relief and Economic Security (CARES) Act, which was passed by Congress in late March. Wages and salaries increased slightly, as did unemployment insurance payments. Meanwhile, spending increased at a record pace as businesses began to re-open and households spent much of the money received from the government. Deflation showed signs of subsiding. Prices as measured by the PCE Price index increased for the first time since February. Read the full report by following the link Personal Income and Outlays, May 2020. The highlights are listed below. 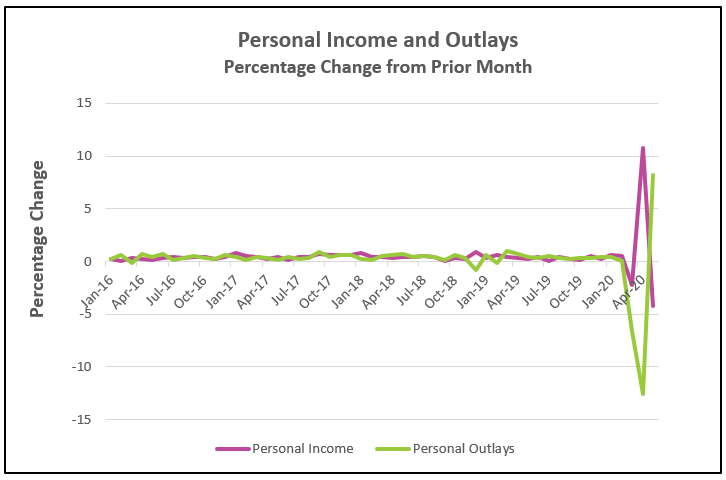 Higher gasoline prices accounted for most of the large gain in the consumer price index in June. But June’s increase was the first increase in 2020 and gasoline prices remain lower than a year ago. Food prices were also higher, driven by processing and distribution problems which have contributed to food shortages.

The core index also reversed direction and increased in June, but not as much as the CPI. Economists prefer the core price index because it is more representative of price trends since it excludes volatile food and energy prices. The largest contributors to the increase in the core index include apparel (2.1%), and transportation services (2.1%). Each rose after falling every month since March. Read the full report by visiting Consumer Price Index – June 2020. Here are the highlights of the report. 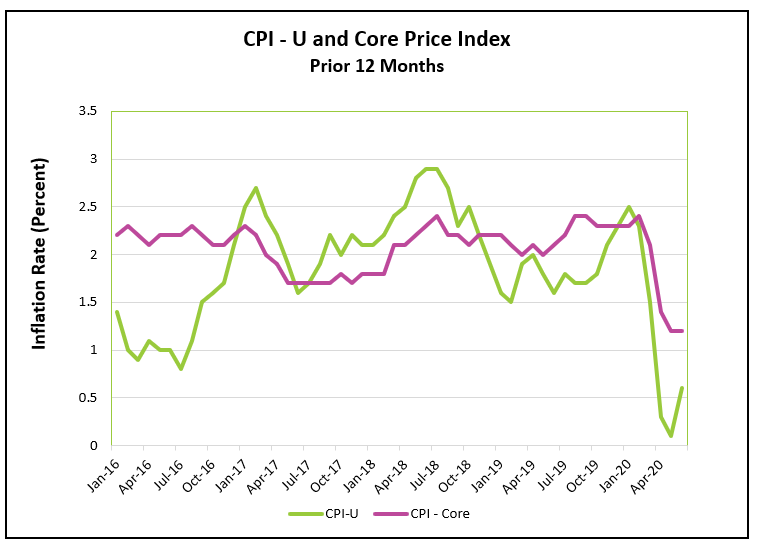 People are returning to work. The unemployment rate has fallen for two consecutive months as communities continue to reopen following the imposition of containment measures in March to combat COVID-19. Leisure, hospitality, education, retail, and health care bounced back the most, but these industries were also the hardest hit when containment measures were established. Low income employees who had been furloughed were the first hired back. It is alarming that permanent job losses did not rebound but continued to increase as more businesses have been forced to permanently close. State workers also did not fare well as states continue to cut jobs to deal with budget constraints. The highlights from The Employment Situation – June 2020. are listed below. 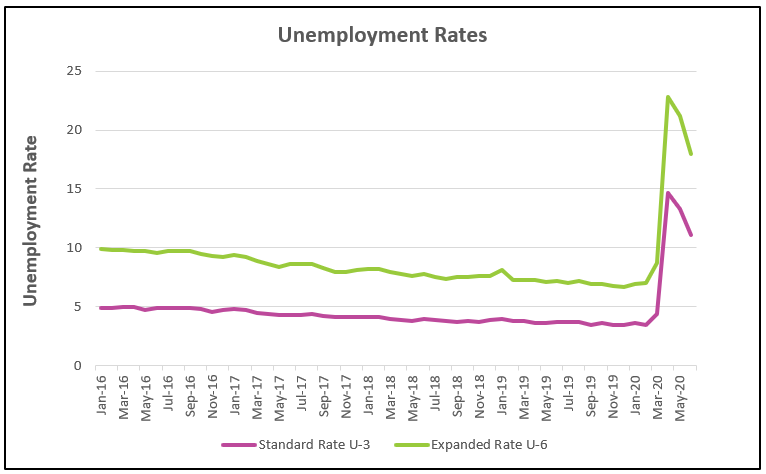 Our leaders continue to grapple with the challenge of balancing reopening to encourage an economic recovery and containing the spread of the coronavirus. A health-triggered recession will continue until the public feels safe enough to resume pre-pandemic activities. Many states have attempted to reopen, but a spike in coronavirus cases has forced many state leaders to reconsider reopening or alter their reopening process. But it may not matter whether the containment measures are mandatory or voluntary because recovery will be delayed if people choose to remain home and avoid crowded places.

Americans are worried. Consumer sentiment remains low and savings levels are high. The University of Michigan consumer sentiment index improved in May and June, but is still well below its level last year. Furthermore, it decreased in the second half of June following an increase in coronavirus cases. High savings rates are common during periods of great uncertainty, such as during recessions when households are preparing for a drop in income caused by a loss of job or other economic hardships. A rise in savings retards a recovery because households choose to save rather than to spend.

RGDP is measured by summing personal consumption expenditures (PCE), business investment, government spending and net exports. PCE is the most important contributor to GDP, because it comprises approximately 66% of the economy. PCE increased 8.2%, the highest level since 1959. Car sales rose approximately 37%. Health care jumped 24%. While the trend is encouraging, consumer spending remains 12% below where it was in February. Sustained economic growth depends on the continued growth in PCE, which relies on income, which in turn hinges on employment. Continued growth in income and spending is not sustainable without an increase in employment. Many of the benefits included in the CARES Act, which was passed in March to diminish the economic hemorrhaging, will have been spent or expire by the end of July. The $1,200 economic impact checks for individuals have been spent, and the $600 weekly supplement to unemployment benefits are scheduled to expire at the end of July.

Trends in employment have been encouraging. Unemployment dipped for the second straight month and now stands at 11.1%. 4.8 million people found work in June. Those who benefitted the most were lower-income employees who were rehired after being put on furlough in the early stages of the shutdowns. Most were in the leisure and hospitality, health care, and retail industries. But companies continue to cut jobs. Initial jobless claims are lower but remain historically very high. In separate reports the Department of Labor reported that initial unemployment claims fell to 1.3 million the week of July 11th. That is a great improvement from the 6.9 million claims that were filed in the last week of March. Claims have fallen 15 consecutive weeks. But prior to the pandemic unemployment claims averaged just over 200,000 per week, so we remain a long way from a full recovery.

More workers permanently lost their jobs in June. Furthermore, businesses that had retained employees using the government loans are now running out of funds and will begin to lay them off if business does not increase. Many economists are concerned that permanent job losses could rise as more businesses fail. Fitch Ratings expect defaults will rise into 2021. These trends suggest the rebound will take longer than initially expected.

If the economy stalls, you can bet that because it is an election year Congress will pass a new stimulus package – that is if Republicans and Democrats can agree on whether to cut taxes or increase spending. Republicans and President Donald Trump favor cutting the payroll tax. Almost every worker would immediately benefit from an increase in disposable income, which would increase the economy’s aggregate demand. Businesses would also benefit from a drop in payroll expenses. The added demand and the lower costs would entice businesses to increase hiring, which in turn generates a larger aggregate demand. Democrats argue that this policy only benefits the employed and does not help those who remain unemployed. President Trump and Republicans worry that extending them would provide a disincentive for workers to seek reemployment because the additional $600 federal weekly supplement has raised the income of many of the lower paid workers to a higher income than they earned before losing their job. Extending the supplement would discourage laid off workers from reentering the workforce. Those conclusions were supported by a Congressional Budget Office study that concluded, “Roughly five of every six recipients would receive benefits that exceeded the weekly amounts they could expect to earn from work during those six months.”

States and municipal governments are in a very precarious position. Revenues from income and sales taxes have plummeted. Most states are required to maintain a balanced budget, which will force them to cut programs and jobs. The Bureau of Labor Statistics reported that 25,000 fewer people were employed by the states in June. Education has been the hardest hit. Many municipalities are cutting police departments partially because it is politically easier to do in response to many protests to defund police departments following the George Floyd killing. The Federal Reserve passed an enormous aid package allowing states to borrow from the Fed at very low rates.

The coronavirus is not going away soon, and the spread of COVID-19 will determine the economy’s direction into the third and fourth quarters. Our choice is whether or not we acknowledge the danger and work together to contain the spread using social distancing, or remain careless and deny the ruthlessness of the virus. By working together, the economy will fare better and continue its improvement, but denial will force or leaders to curb economic activity, which will slow the economy, and delay the recovery. Eventually the economy will thrive. Its fundamental strength is too strong. The question is when. My prayer is that each of us act responsibly and that our leaders have the courage and wisdom to lead us back to economic health soon.